My first season is over and my only entertainment right now is coming from this forum, So I thought it would be a good idea to have everyone share your favorite stories of the 2019 season. I am trying to get a better grasp on the karting world at many different levels. All stories are welcome, (the good, the bad, anything)

I’m looking forward to some good ones here

I had a customer wear through the bottom of their frame at the front to where you could see inside the tubing, that was a first for me this year.

Also looking forward to some good ones. I did the same to my front bumper but thats plastic. Id love to see how that person drove to do that.

They drove fine, kart was great and fast, until it was worn through and then it was horrible as one would expect.

Wrote up a couple of stories 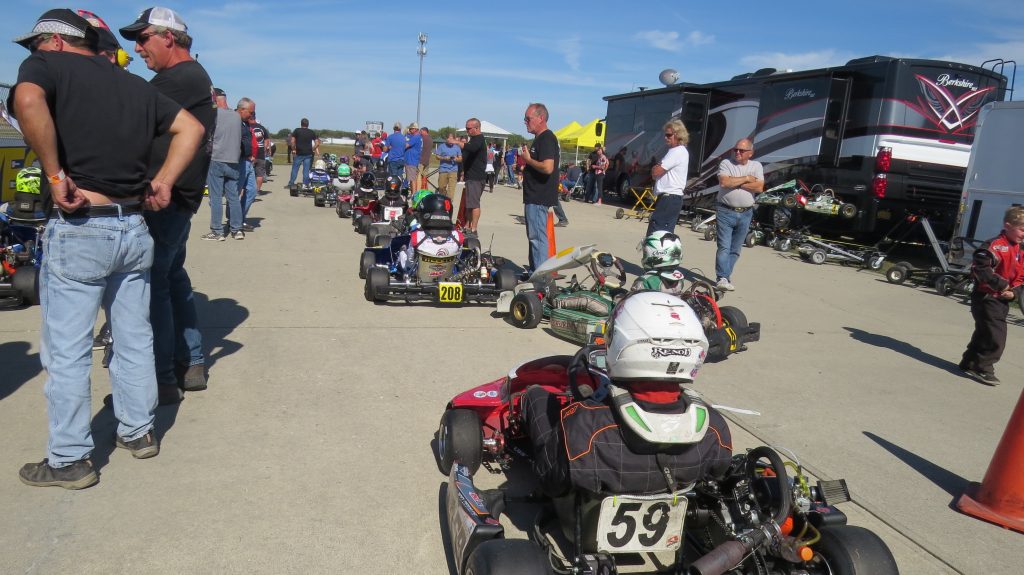 Jason is trying to earn InTech Trailer for 2020. Please, follow this link and please vote for Jason Pribyl: InTech Trailer #MaxTheTach Thanks, now share it with your friend, fans, and family. … 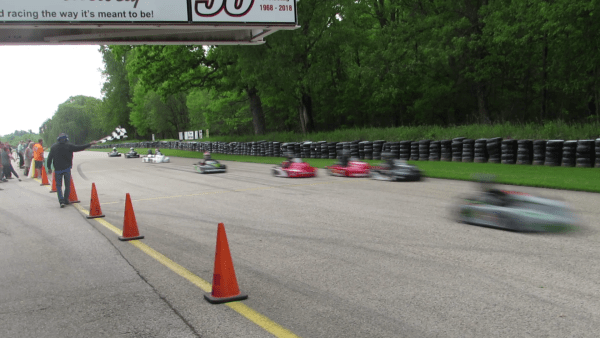 This is why we race

The second Championship Enduro Series weekend, June 1-2, at Blackhawk Farms was probably one of the most challenging we have ever had.  Jason wasn’t involved in any wrecks but there was …

One of my favorite stories was the $700 bar tab a friend racked up at the Rio Hotel bar on Saturday night, buying drinks for everyone in the bar, two-at-a-time. Then texting me a pic the next morning of the receipt wondering what happened.

Did you ever have a logistical nightmare day that somehow worked out? Ie miss quali because of something but end up doing great none the less? Or vice-versa? Falling flat on face despite perfect prep?

On our way to the track. We had a radiator hose blow on the car. Had to stop at a Chinese resturant to fill up a cup one at a time to refill the radiator after we duct taped it. Then made our way to a parts store replaced and refilled with antifreeze. Made it to the track with time to spare lol

I had one of those, my first podium at a Route 66 event. We were running at my home track, and I caught the driver that went out ahead of me at the last corner of our second lap of three. This threw away both of my last two laps and I ended up starting 17th.

Well, I managed to get from 17th to 9th in a shortened pre-final since rain came down and they had to stop the race at 7 laps completed.

Then, it started pouring for the final. I knew I could compete well in the rain. I picked up 3 positions on the first lap, and reeled down 3rd, 4th, and 5th over the second half of the race. I managed to work my way into 5th, and knew there was no way the kid in 3rd was getting out of the race without a bumper penalty, so I didn’t worry too much about him. I was perfectly content knowing I had a 4th place finish practically guaranteed so I was just looking to keep my position and not fuck anything up. Well, we finish the race, get to scales, and the driver ahead of me came one pound underweight. I got 3rd, but felt terrible for Peaches, cause he had a great race and absolutely deserved his 3rd place finish with the drive he put in from 18th at the start, but rules are rules.

I was under their tent later in the day talking to TJ, and Brian walked in. I guess his dad left a 2 pound weight on the table and forgot to put it on the kart before the race, and Brian made a joking comment about how since his dad cost him the race he could clean up the kart now.

@tjkoyen I don’t know what you do to that kid but he is always so fast in the rain, I’m a bit jealous of it to be honest.

Pre-Final of the first round of the ICP Cup, hadn’t raced for years, had qualified 4th so was pretty happy. It rained last minute (but with enough time to get wets on) but airbox fell off. Came in and got it put back on as the grid went by to take the green. Went out on track and the airbox fell off again, so, drove the prefinal one handed, holding the airbox, starting half the straight away behind.

Drove up to 3rd, one handed, 1st got excluded for rear width, started the Final 2nd, won the final.

I was pretty happy with the one handed wet race, and only two people (who came up to me afterwards) noticed what was going on.

Haha good stuff. I remind myself on those race days where everything has gone sideways to persevere. You never can tell where you will finish.

@tjkoyen I don’t know what you do to that kid but he is always so fast in the rain, I’m a bit jealous of it to be honest.

As Brian and Dave always proudly say, “marginal drivers excel in marginal conditions”. No explanation. His rain setup is stupid, he’s always got attitude, and Dave is hilariously tuning inept. But somehow in the rain everything works.

Did you ever have a logistical nightmare day that somehow worked out? Ie miss quali because of something but end up doing great none the less? Or vice-versa? Falling flat on face despite perfect prep?

I have had a few issues getting to GoPro for USPKS races. Once I missed a flight so had to drive 14 hours overnight to get there and still missed half of Friday practice. And I have so many countless stories of my dad’s dumb unreliable trucks breaking down on the way to races. Once we ran out of gas in the middle of Wyoming at 2am and we had to pull over and top the tank off with un-mixed race gas out of the trailer. Just us, the moon, and some cattle out in the middle of nowhere. Once we drove to Daytona for Kartweek and drove 24 hours straight through, and as soon as we parked the truck in the paddock, the fuel pump died. On the way home, the rear end started to fail. Once we got home, the furnace in the house had died and it was 36 degree inside. Expensive trip. One time we had a catalytic converter completely meltdown and we had to find a Chevy dealer to get the entire exhaust replaced, which was going to take days. So we had to call a nearby racer friend to borrow a truck. Turns out someone had put a little too much used race gas through the engine to get rid of it… That same truck had some other malady probably 2-3 more times on long race trips.

Jeez TJ, your dad and his trucks seems like a lifelong love/hate thing. But, these moments will be remembered fondly?

Almost all racing moments are remembered fondly. Great to have a few beers, look back, and laugh at each other!

My only story is from towards the end of last season, when I blew my first motor. 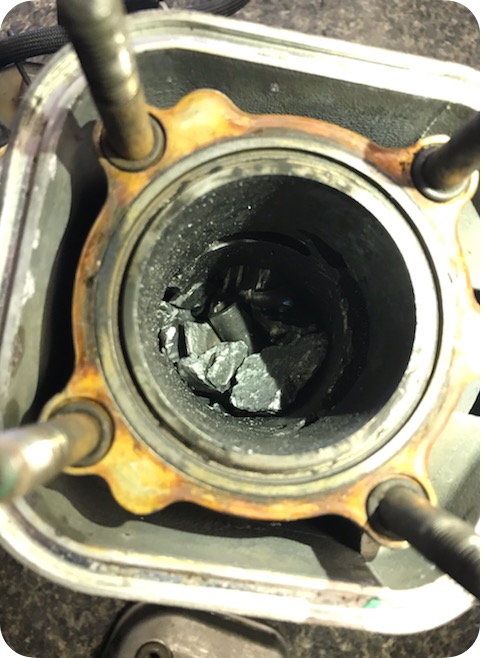 In a previous race, I hadn’t noticed that the water pump hose had become unhooked. (This happens far too easily, FYI).

When I pulled into pits, the header was so hot that the aluminum had changed color, and the engine builder stickers had burned off. Not good.

So, my engineer Jerry looks at it and is like, “Uh, Dom…”.
Anyways, we decide to just run it till it won’t run no more.

Fast forwards a month later and I am in pre, chasing down Jeff, and blammo goes the engine on the back straight at Etown. At full chuff, the piston tried to exit the cylinder. The piston arm penetrated through the bottom of the engine, and the piston itself was reduced to an aluminum powder. Pretty cool, actually.

So, I figured we were finished for the race. Absolutely nothing to be done, right? And we only have 1/2 hr to get it sorted anyways.

Unbeknownst to me, in 1/2 hr, Jerry went and borrowed Bonanno’s spare x30 (thanks JB!!!), mounted it, and I got podium in finals. If I’m not mistaken, this is the race where I passed Hans in the final turn to take 3rd. Awesome memory.

So yeah, a small miracle I hadn’t expected.

(EDIT: Now I remember… This was even cooler in that I was chasing down Jeff for 2nd in Pre-final when my engine blew. So, after Jerry worked his miracle, I had to start from the back in final. I then worked my way up to the front and passed Heinz to grab podium in the final turn. I am smiling just thinking back on it. This was very special.)

I love reading about the whole race weekend and all the individual stories. Great writing. Also, ive never heard about animal 370. where do they normally race?

Stuff like that happened to me twice this year, dont need stress before you even get to the track

im struggling to get top 5 over here with 2 hands! very impressive

might have to start leaving a day early to get on time if you keep taking those trucks. We had our starter break and we were stuck at the track (middle of no where) for 6 hours waiting for a tow