So iirc Marco did a thing last year… 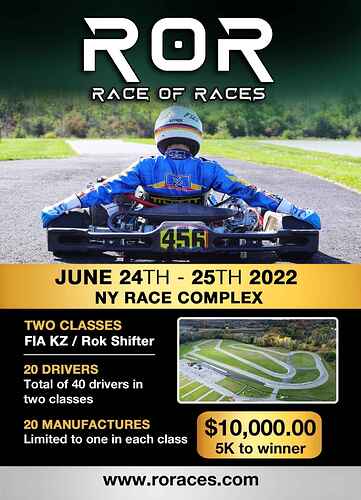 Did it actually happen? I remember it being talked about and sort of thought it was a silly idea. I get the concept of making it a “professional” event with “factory” teams, but just calling an event those things doesn’t mean it is. Forcing drivers to wear only “factory” gear and limiting the number of each manufacturer in the class gives it some illusion that it’s like an F1-level “pro” race, but that doesn’t mean it is.

I don’t know, actually. I believe they may have dropped the one entry per manu part.

Shifter only money race with a good sized purse. It was one driver per factory, iirc. I wonder if it was successful?

I think prize money, for it to be a defining factor of success, needs to be something integrated into a professional long term viability based structure. For example SX has prize money distribution as well
as the manufacturers having a system for customers to gain income form their success. While not perfect it serves the purpose of creating a sustainable professional environment.

For one off kart races, while certainly a nice addition, they are decoration i.e something nice to add on top… The market doesn’t react particularly well to prize money being an main incentive because generally the market has no expectation that karting is a professional activity to pursue. It’s not in the psychology of sprint karters for whatever reason. it’s very cultural and I hope it’s changing. I think it’d be great for top karters to earn a real living racing (and by real I don’t mean a free drive while coaching too). Everything has to be right in a companionship first before you think about prize money if we’re talking one-off races.

There hasn’t been a formal mention of it since April of last year and now it appears Rok Cup USA is going to be racing there, wouldn’t be surprised if they’ll just be absorbing that date. But the F Series still uses #ROR in their posts, so make of that what you will

I thought it was optimistic when I first heard about it, but was interested to see how it unfolded. Unfortunately, I don’t think you can announce an event like that over a year ahead of time and expect it to promote itself thereafter.