My Racing Journey so Far

Someone suggested I post this here, thank you Dominique, so here is my racing journey so far:

I started out when I was little doing some indoor rental karting, and did well enough to the point that some of the employees wanted to see what would happen if they threw me in an adult kart. I wouldn’t say no. So they moved the seat all the way forward, put some pedal extensions and a booster seat in, and I set the lap record. I might have had a weight advantage but it was fun lol.

In 2018, when I was 15, after doing the indoor rentals and some outdoor stuff at Raceway Park in Englishtown every now and then, with the help of getting a job at a local bike shop and some very close family friends, we were able to fund a full season of racing doing the F Series State Championships. Most of my gear was borrowed out of the rental truck trailer, it made for a relatively interesting look. Raced in TAG Junior and was on the podium almost every weekend, would have been P2 in the championship if not for a DQ at the final race of the season, which bumped me back to P3. But regardless a big thank you to Full Tilt Racing for the support all season and for teaching me so much.

Moved up to TAG senior the following year in the same series with a new team, Kartworkz., struggled a bit overall but learned a lot. Struggled a bit with engine issues in addition to needing to get some more seat time under my belt, and make some improvements to my driving. Braking specifically. Despite that I grabbed my first win in the rain!

2020 had an interesting start for reasons people are probably tired of hearing. But during lockdown, I made some friends and had fun doing a bit of sim racing. But when racing did start up again, I competed in my first national races. Grabbing 6th place at WKA Grand Nationals after starting from the back due to a mechanical issue in qualifying. Then followed it up with P9 at the Rotax Grand Nationals, 4th overall in the Rotax Stars and Stripes series, and another win in the rain at the State Championships. A huge thank you to Kartworkz for everything.

Decided to make the move to cars in 2021, called a lot of teams in the off season and landed a two day test with Team Pelfrey. Test went very well overall, and was on race pace midway through day 2. Had a great experience, learned a lot from the experience, and was making arrangements to drive for them for the upcoming season. But another driver who had previously tested with them stepped in and grabbed the seat before we could get everything in order. So the team owner recommended me to Ammonite Motorsports, previously Low Dempsey Racing, a Formula Ford team in the UK! Which turned out to be a blessing in disguise. But in the moment it left me and my Dad scrambling to try and figure out how to get an FIA license so I would be able to compete. In order to qualify for the license I would need to complete 5 FIA ACCUS sanctioned races. The most effective way to do so would be to run in Spec Miata in SCCA national races. Fortunately a mechanic I had worked with in karting was able to vouch for me in order to get my SCCA license in order to compete in the states.

Showed up to the first weekend which was a national race, where I would be running 2 classes to get as many races done as possible. Met the team owner and the conversation went something like this, “This is your first race in cars right?” “Yes” “Have you driven stick before?” “Nope.” “Ah you’ll figure it out.” Did my best to get comfortable in the car during Friday testing. Progressed throughout the weekend and got through the races cleanly. The following weekend was the final race needed for me to get my license. Was more comfortable in the car and finished 14th out of 44 cars.

Unfortunately because of the delay of getting my license and all of the last minute changes, I had missed all of pre-season testing and the opening race rounds in the UK. So after two days of testing at Donington Park, it was off to round two of the BRSCC National Formula Ford Championship. Grabbed a top ten finish my second race weekend and progressed from there. Learned a lot over the course of the season. Made some mistakes but learned all I could from them. Progressed a lot and consistently finished top 8, got close to a few podiums but did not quite have the pace just yet.

Really happy to be back again this year for a full season! Making a lot of progress this year. Came really close to a win at Silverstone earlier this season, qualified on pole and finished on the podium in both races with fastest lap. Was leading in race two but got punted out of it on the last lap! It hurt but overall it was solid progress and things are starting to click. Grabbed my first National podium at Croft, set the second fastest lap in qualifying, less than a tenth from pole! But unfortunately that lap was deleted because of a questionable call from the stewards. My second fastest time wasn’t the greatest so I started in P7. Made it up to P4 in race 1. Got a really good start in race two which put me into P3. Lapped traffic kept things interesting but I built a gap in the closing laps of the race to secure the podium spot! Grabbed my first win at Snetterton as well! With 4 podiums and a win so far, I’ve been picking up speed. Looking forward to the races to come. Some off track developments are also promising, excited to see where it goes from here.

If anyone has any questions or comments, feel free to reach out. Hope you guys enjoy it and thank you for your time! Thank you to Dominique for the suggestion. 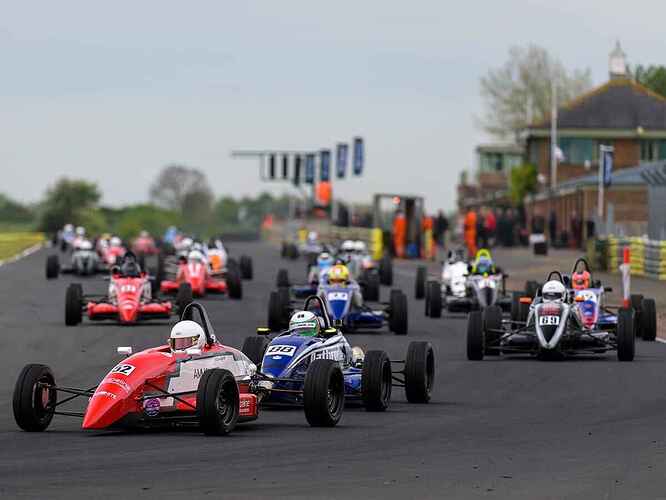 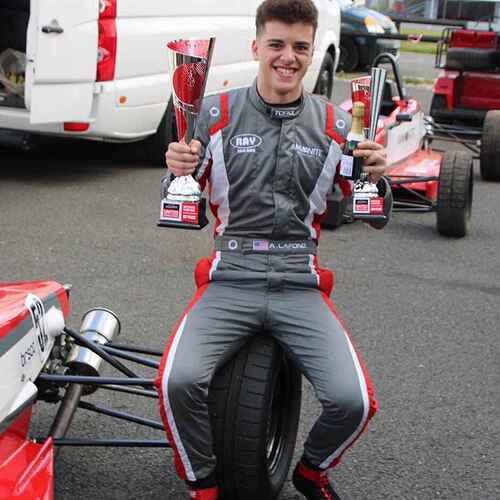 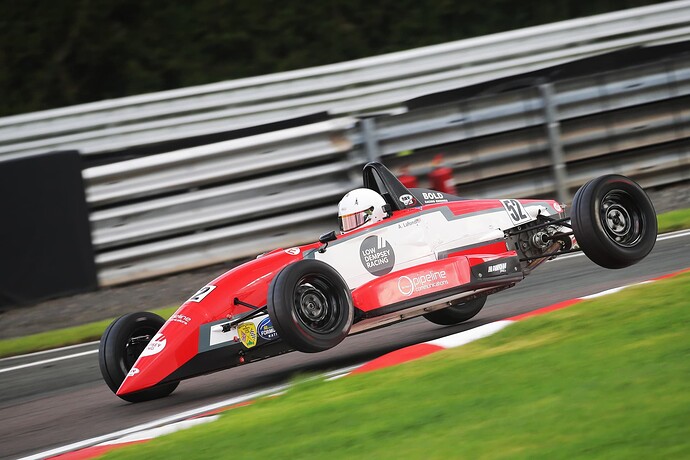 @Bimodal_Rocket Its posted, and @E13 if you want to have a look.

Awesome! I am heading out shortly and will read on train! Looking forwards to it.

Andre,
It’s cool to read about the experience. Huge congrats on the podiums and everything else! What are your plans for this year? I know you headed back to UK just recently. What’s your schedule for this year look like?

What would you hope to have happen/accomplish this season? 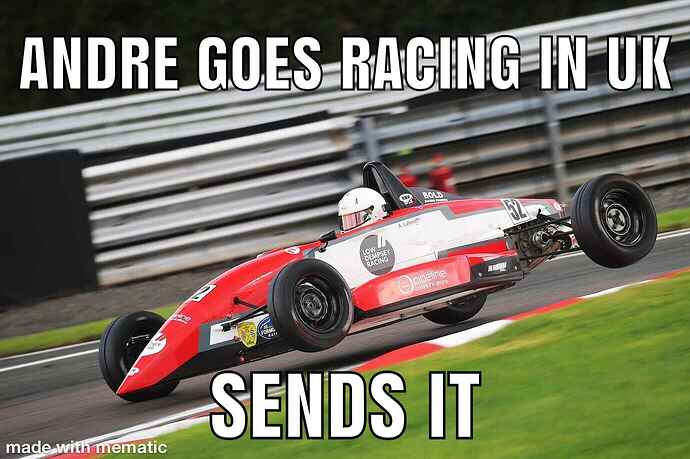 Andre this is an interesting story and to some degree, I suspect your story is like many others that have made their way to the top forms of motorsport. It would appear you are on that path as well, good luck to you on that endeavor.

So to add to the questions:

Let’s talk about the decision to go pro as opposed to following conventional wisdom, going to university, etc.

How did you (and your family) consider/discuss/decide to pursue an unconventional path? Covid? world on fire?

I’ve beaten him in forza, does that mean I get his seat now? 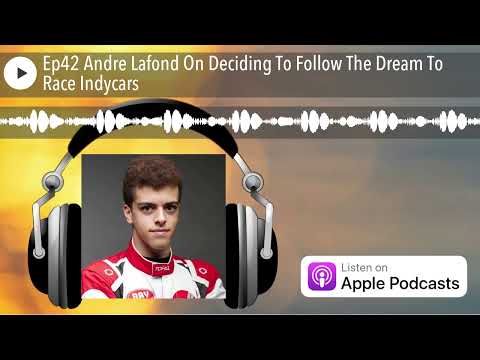 It was something I thought about for a while. But I came to the conclusion that I had a shot at it, it’s what I’m good at and I love it more than anything else. When I told my family about it, they both basically said that it is what they thought I would say. Fortunately my family has been incredibly supportive, while we don’t have huge amounts of money, we are figuring it out.

Glad you enjoyed it and thank you! Schedule for the year is following the BRSCC National Formula Ford calendar, as well as a few races in a different series. There are also the two really big year end races, the Walter Hayes Trophy and Formula Ford Festival, that I will potentially do.

This year I’m looking to get my name out there more, grabbing some more podiums and wins, doing a better job on the social media side of things, as well as lining up backing and a seat for next year. Looking to move into GB3 (British F3), or something on the Road to Indy ladder.

It was with a leaderboard car, thus it is null and void.

Thank you! Love the mtb by the way. When I’m home I do a decent bit of park riding.

Thanks for sharing. Good luck and may you have many podiums and wins. For those who like to watch, it appears that this organization streams the races: 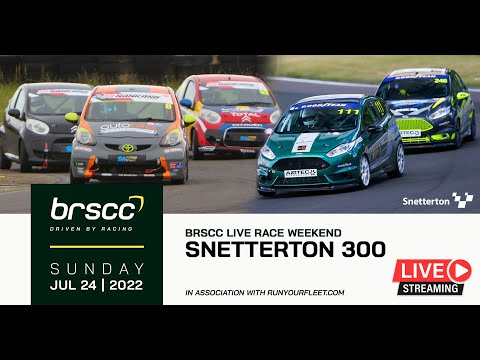 When I’m home I do a decent bit of park riding.

Would that be at Mountain Creek?

I do a fair amount of trail riding around home and some DH when I can. We have a mountain about an hour away, not as good as Mountain Creek though.

Yeah, mountain creek is a lot of fun. Really good tech trails. Flow trails end up getting beaten up pretty bad though.

Called smart decisions. Why would anyone want to race a Williams when they can race for red Bull?
And that van was damn quick too

Through magic, I can fail at making a car that should be fast but I can make a competent van.

@AndreLafond, CONGRATULATIONS on your first win in the BRSCC National Formula Ford Championship!

@AndreLafond Indeed. A monumental accomplishment and one that you cultivated very nicely. Your races have gotten better and better!

Thank you so much! Made the car wide at the end haha.