Mychron + EGT - which sensor to buy, and how to install

I’m looking to install an EGT w/ my 5S-2T, and have a bunch of related questions.

First, which sensor to buy? I see mychron sells two for basically the same price: standard and t12. Or a aftermarket ebay option.

Second, I believe I’m supposed to drill a hole and weld a mounting nut on the exhaust. Mine happens to already have a thread welded on (roughly 5/16" ID), though it would still need to be drilled through. It looks made for an EGT but it’s way too wide for a Mychron sensor (which I believe are 5mm, rather than approx 16mm that I have). What is this for?

Third, I found another thread saying to install ~65mm from the back of the engine which is roughly where the thread is. However, mychron’s instructions says 150mm. Which is it? 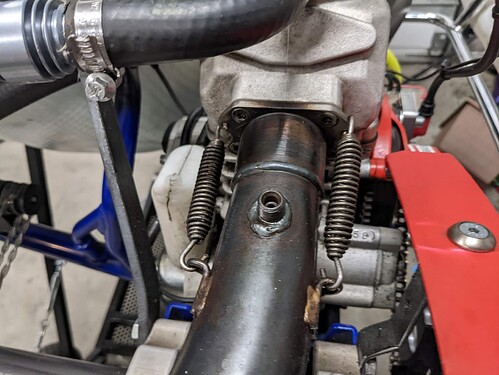 I found Mychron also sells a heavy duty version with a “clamp-on” fitting: link. I might prefer that, given the claims of longer life, and the fact that I don’t own a welder. Also it’s only slightly more expensive.

It’s confusing because AIM doesn’t list these uniformly across the globe. Why they don’t ensure their catalog is available with consistency across markets is beyond me.

The “heavy-duty” EGT Sensor is also available in an open tip design which is an exposed vs closed thermocouple which has the added benefit of a faster response time. If I were to do it all again I would standardize on the heavy-duty open tip design.

There are also two styles of the heavy-duty 90-degree style sensor, one open tip with a more conventional compression fitting, and the other has the ferrule built into the probe and a closed tip.
The one with the compression fitting allows you to set where the probe tip is placed in the exhaust stream vs wherever it happens to be due to the other built-in style.

IMO this is the one to have

Makes sense, I think this is the same variant but offered slightly cheaper: link.

Any comments on the installation? Is my exhaust threaded at the right spot already, and if so, what’s the right way to use it? It seems sad to drill a hole right next to it. I see they do sell adapters to 5mm (example), but I’d have to figure out what size I have.

Where the bung is currently is fine, you want it closer to the exhaust port than further. I think that 150mm suggestion might be for cars every other suggestion for karting EGT placement has been about 2" or that 60mm suggestion.

I would use the bung you have and get an open tip style sensor.

If you have an engine builder, ask him what he uses on the dyno. Most useful at the track during a phone conversation with the engine builder.

Can someone confrim which sensor reads “true-er”? From what I recall either the straight one or 90 reads hotter… not to sure if that means closer to actual or just 100degrees off.

I use this one:

This EGT has been designed specifically for KZ & KF homologated exhaust pipes.

You’ll need to drill a hole in the pipe as you mentioned, but once that is done you simply insert the the sensor and thread onto the fitting. This should be the open-end sensor, which is more responsive, and will read higher than the closed heavy duty sensor or the smaller “straight” sensor.

The heavy duty, or right angle, EGT sensor should fit in the hole that is already in the pipe. I had ran that sensor for quite some time until I switched to the normal one because the pipe I had purchased was setup for the standard one and not the heavy duty.

rom what I recall either the straight one or 90 reads hotter… not to sure if that means closer to actual or just 100degrees off.

It is opposite. The heavy duty one reads about 100 degrees hotter than the standard stick one. I know from experience of running both of them. I believe that the reason for this is that the probe end on the heavy duty one stick further into the pipe and gets a reading more from the middle of the pipe, where the standard one is closer to the edge of the pipe and doesn’t have as hot of exhaust near it.

Ok, that makes sense. So it’s less about it being a special probe or that is more sensitive and more about the position of the tip between the two types

OK, so I got a caliper out and measured my bung at 12mm. I put 2+2 together and realized the T12 EGT probably means 12mm, and would be a direct fit onto my exhaust. From the manual, even their photo looks like mine: link.

The “heavy duty” EGT isn’t even listed on AIM’s website, so I can’t find the spec for it. It looks like it may also be 12mm but I can’t tell for sure. Will the heavy duty open-tip one also be a direct fit?

Buy the one @Muskabeatz linked to and drill the inside of the existing bung to fit. Don’t get caught up in all this other stuff being talked about with heavy duty and whatnot.

I’ve usted EGT sensor for a Long time, Alfano and Mychron, I haven’t noticed any difference between the expensive EGT sensor and the cheap EGT sensor, no difference whatsoever, they last the same, years and years no problems at all.
What matters is that you really learn how to use the reading you get from the EGT, an exhaust temperature is a very vague number, be careful whenever that temperature starts to come down when you get to the end of the longest straightaway of the track.

OK, so the EGT nut is 10mm or so, and my exhaust bung is M12-1.5 (discovered through trial and error), so that didn’t work as a direct fit. I think I can make it work by welding the 10mm onto the M12 nut. How is the “height” of the sensor controlled? When I test fit it together (not tightened down), there’s no resistance to me pulling the sensor right out.

I test fit with a bung, the conical piece, and then the nut together, assuming it goes around the halfway point before the bend.

Thanks, with your help I was able to get it installed. Basically, I needed to tighten more – the cone-shaped piece flattens down, and is now stuck at the random height it was at when I was testing things :-P. It should work though.

As mentioned above, the EGT varies depending on the sensor. QUESTION: With a T12 installed in a VLR 100 pipe, what should the maximum EGT be per lap for best performance AND what should the minimum EGT be for the same lap? For reference, I have been advised and I have been tuning the two jets not to exceed 1200 degrees max. However, I’ve gotten very conflicting advice on the minimum EGT. Some advise as low as 750, others as high as 1000. Does it matter if the engine “sounds good” throughout the lap or is 1000 too lean at the low end and, thus, dangerous to the engine?