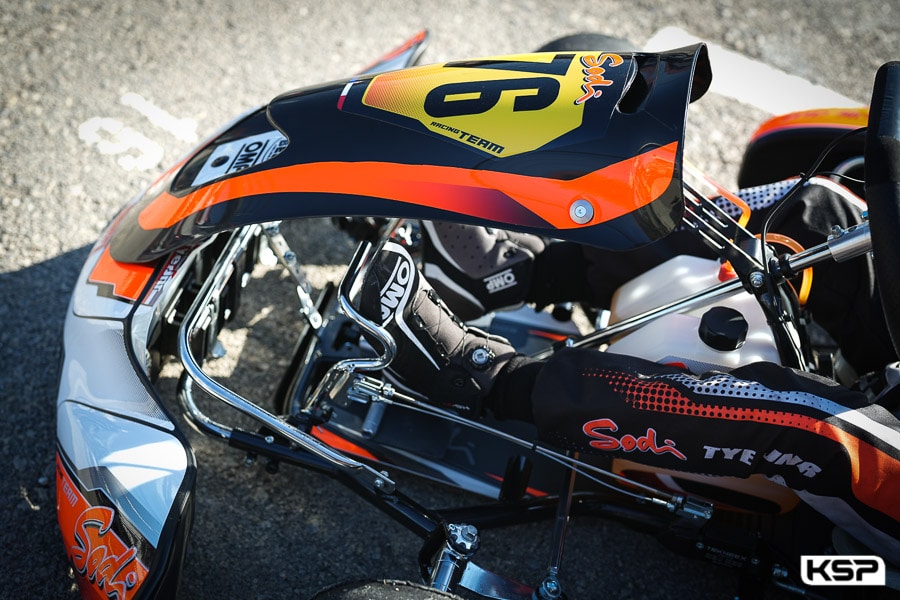 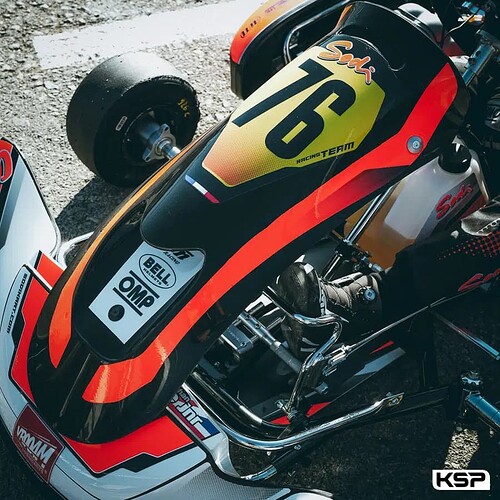 Absolute bonkers. How the FIA have allowed what amounts to safety mandates to be exploited for aero gain (and in the end increased profit) is beyond me.

This kind of development adds absolutely nothing to karting other than increased cost. I warned about this back in July, and here we are.

How does it affect the safety?

(I’m not trying to start an argument, I just never knew

Looks cool. Doubt it makes a difference in lap times unless you’re already chasing your last .001 to beat the best of the best.

FIA: “Karting is too expensive”
Also FIA “Let’s start a war of arms for aero”

I don’t like it for karting, but it is a cool thing. I can’t see much benefit from this though? In my minimal knowledge of aero, doesn’t the S-duct work to keep the flow of air attached to the bodywork, keeping it from becoming turbulent down the car so it works better on other aero surfaces? Surely that doesn’t apply to a cadet kart…

Also I am hearing rumors about more aero development by another manufacturer, so year, welcome to the land of $200 nassau panels…

As an avid bicycle racer in addition to racing my kart on the occasional lucky weekends, I’m used to seeing an aero war with bikes, and this doesn’t even come close to being one. In comparison, my racing bike which is aero-optimized to the extreme costs more than my Tony Kart/Rotax easily.
This Nassau panel looks pretty cool and represents a nice facelift on Sodi’s product line and $200 is a small price to pay for that.

I assume with a new homologation schedule coming in 2022 every manufacturer will come with some new bodywork. Isn’t this just on schedule? At least we don’t have in-season development of aero solutions and such. I’m fine with it if it means upgrading once a year or once every few years.

I think Alan’s main point is that these new aero fairings cost literally 10x what the old normal fairings cost.

I assume with a new homologation schedule coming in 2022 every manufacturer will come with some new bodywork. Isn’t this just on schedule? At least we don’t have in-season development of aero solutions and such. I’m fine with it if it means upgrading once a year or once every few years.

It’s not an ‘upgrade’, and shouldn’t be considered an upgrade, in my opinion. Homologated safety equipment should never be offered as performance based upgrade.

These nassau panels literally bring nothing to karting. I’ve raced without pods completely so I guess I may have a different view on things.

The only reason we have karts covered in plastic is solely for safety. That’s it and it started way back in 1985 with Formula K. A carefully worded regulation could kill these nassau panels overnight and you’d never be able to sell one above $25.

So when you go from $25 nassau panels to $200 (or whatever price point this one falls at) alarm bells should be ringing, If every manufacturer comes out with these types of nassau panels, which it seems might be on the cards, then due to homologation requirements every karter might find themselves having to shell out $200 or so for what amounts to nothing in terms of the sport.

Wealthy people don’t care, but your average joe? These things add up.

I understand your point and while it’s probably valid for the lower echelons for karting. If the top guys are going to spend x amount of dollars they are going to spend it anywhere. Whether it be a nassau panel or somewhere else.

Just like the top guys go through a chassis or two a weekend while the club guys gave 2-5 year old equipment. I don’t think these nassau panels change that one bit, at the top its always a development race determined by the biggest budget.

The top level guys should be almost all but ignored. They make up a tiny percentage of the sport and their spending habits are generally more about following some F1 dream. Remove F1 from the equation and that end of the sport collapses over night. The number of racers you get at a national event is the same as one small club. And there’s a ton of small clubs. So the ‘normal’ guy should be absolutely the priority, always.

I’ve helped a lot of new people get into karting over the last 10-15 years or so and it’s never been THIS bad for a normal person to get involved in modern kart racing.

Take my budget kart. Cost me £600. A reasonable amount but achievable for a good number of working people

However, the newcomer who hypothetically has my kart would find arriving at a Motorsport UK regulated kart event in the UK that they need to buy a drop down bumper system. That’s if they had spent money on getting a licence and passing the ARKS tets. They’d also find Rotax made their engine out-of-date and they’ll probably think they need to buy an EVO Rotax (not NEEDED but I can see why a newcomer would be confused). Worse still you find that you’re having to run D5 tyres which are atrociously grippy and mean any normal person can’t really dream of getting fit enough to race competitively. Now you see people running these flash nassau panels, and suddenly your kart’s bodywork no longer is in homologation and you’re like “HOW MUCH?”. Worse still, the new homologated rib protectors come into force (which will happen sometime in the near future) and you have to fork out even more.

And at this stage you sell it all and move on. I’ve seen it time and time again. This is why this kind of stuff annoys me because it shows the sport actively turning its back on the VERY people that made it successful in the first place - the average joe.

I don’t disagree with any of your points but unfortunately the top echelons of sport always filters down.

Here in Canada it’s the same thing in karting but also in hockey. My 8 year old nephew just had to buy all new hockey equipment to match his new team. And next year when he either grows or switches teams to AA or AAA he’ll have to buy new equipment again. When I was that age all we just bought whatever was cheapest but with the influence of matching team equipment in the NHL that has pushed to lower and lower age groups.

So as you can see it’s not just F1 that influences karting, all major league sports influence the lower tiers.

So as you can see it’s not just F1 that influences karting, all major league sports influence the lower tiers.

This take is detached from reality. You may see it differently but the majority of the public and racing community sees karting as an entry level motorsport while F1, WEC and Nascar would be considered the pinnacle of motorsports.

So if the FIA mandate a nassau panel for cost savings then what would the FIA do next? Where does it stop, do we mandate a standard chassis next? Then what about just handing out engines at events as well so no one can look for performance gains there. If you want the FIA to go after cost savings I think it becomes a slippery slope and karting just becomes a single make sport all in the name of cost savings.

Firstly not detached from reality. Nascar doesn’t have FIA World Championship status… so if we’re talking tiers… karting is ahead. And if karitng is lower tier please explain why Danny is so far off Kremers 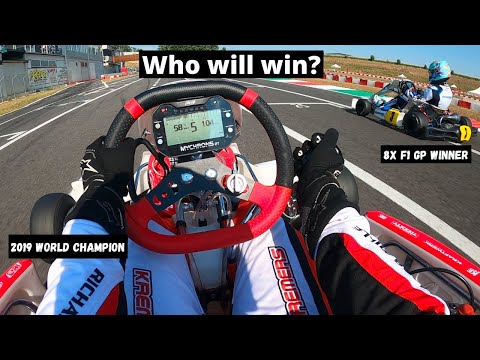 Secondly you’re confusing the difference between safety mandates and performance mandates. Under the sport of karting mandated performance items are engines and chassis. That’s acceptable and part of the sport. It’s a shame we don’t have a tyre war either any more but there you go. But there is a clear difference between extracting performance from the historically agreed components that are chassis and engines, and extracting performance from items that are mandated by safety (beginning with fibre class sidepods in 1985 in FK) and inflating the base price of the sport.

I personally wouldn’t have bodywork. Look at my profile pic, I am not joking. By accepting bodywork, you are actually one step more down the road towards spec racing than I am… I don’t like anything on a kart that isn’t for performance only.

But the reason I am so strong on this is because from a performance aspect the sport never ASKED for bodywork. It was bought in for safety reason. Once the manufacturers started exploiting bodywork for performance and charging a lot of money for it there is an intrinsic breaking of trust between competitors who are forced to run these items and the governing body.

“You make us wear these pods for safety, and now we’re getting charged $200 for a thin slice of plastic”

There is a reason the FIA don’t let F1 teams build their own Halo devices.

It blows my mind really that people think this is fine.

I guess a lot of us in the USA don’t care because we don’t have to use current homologation stuff. At most, we have to use something that was homologated at some point, currently valid or not.

I fell for the areo hype. I remember being new (I’m still new) but watching the really fast guys in LO206, and I noticed the front 5 all had the same inhanced aero. So my thought was, “Do what the fast guys are doing.”

So I bought the areo, and I picked up zero time. Turns out they were fast because they had advanced skills, not aero. Who knew!?

Now I just look fast, as I’m struggling with the rear of the pack.

Absolute bonkers. How the FIA have allowed what amounts to safety mandates to be exploited for aero gain (and in the end increased profit) is beyond me.

This kind of development adds absolutely nothing to karting other than increased cost. I warned about this back in July, and here we are.

July? Heck, I’ve warned about this garbage happening 3 years ago:

Last thing karting needs is an aero war. That is a black-holed money pit with no end.

This just reinforces the idea that the CIK/FIA and the related euro karting industry suffer from a case of myopia.

But aside from making things more expensive, I could never approve of the recent trick aero fairings from simply how they are all fantastically ugly.