TLDR: I’m building an EFI system for karting application, based on a ground-up design that would also work for motor cycles.

The last couple of weeks I’ve been doing a deep dive into spec racing and spec classes in karting.

Talking with people that established (or were heavily involved with) programs about what worked, lessons learned and if they were to do it again, what would they do differently…

One of the things to come out of that was a desire for EFI. I’m pretty comfortable with carbs (My 100cc direct drive days ensured that), but I’m also super keen on the granular and adaptive capabilities of EFI.

Recent developments in open source hardware make it more viable than ever to build a bespoke, paired down system that can be produced in volume.

Last night the first hardware steps began. There’s a lot of research up to this point, but now it’s development time.

My hope is to have the (prototype) EFI system on the kart in June.

At the beginning this is going to be pretty hacky, but as we move closer to the final product things will be much cleaner.

I hope to share everything from design/build, dyno and on track tuning and everything in between.

For now the working title for the system is MuleEFI
Why?

Here’s the first pic following a successful throttle position sensor test last night. I had 3 throttle bodies laying around from the rental kart stuff I bought a few years ago, spent some time figuring out the pinout and nothing blew up. 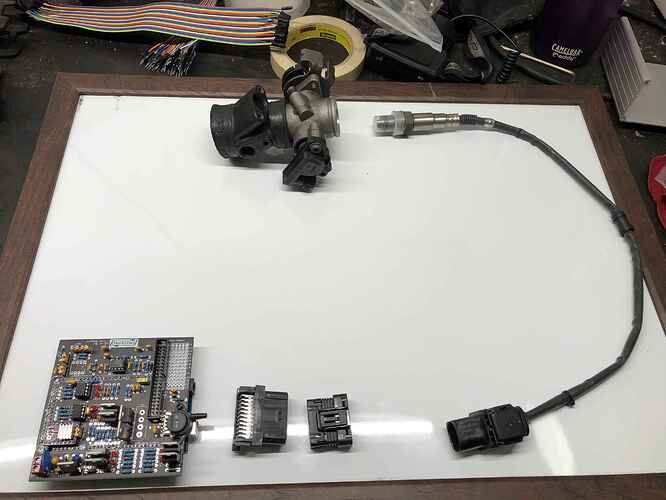 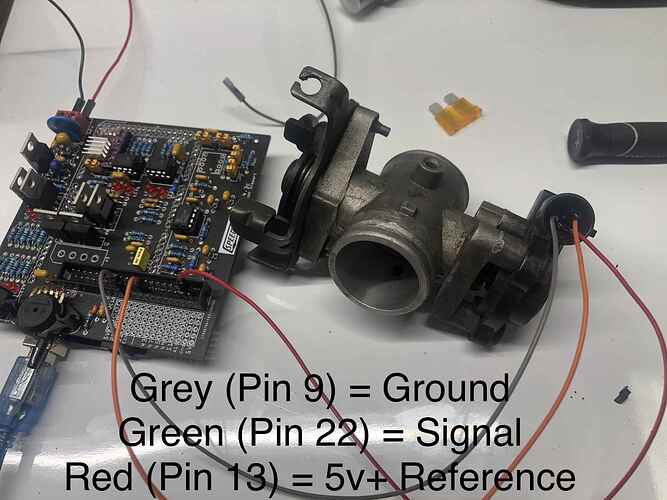 You can see my color blindness in the second pic. I should add, I won’t be doing this on my own, I’ll be bringing people on board who know a lot more about this than I do!

James, does efi allow for better parity? No carb monkey business? Is that why a spec series would like it?

For sure EFI can bring introduce more parity. It can provide consistent performance across a spectrum of (Spec) engines. Being able to adapt to changes in conditions helps on those days where some racers are scratching their heads too. Wether the challenge in the day is power, driveability/throttle response or starting problems, EFI can pickup were the carb left off.

Typically the concerns are cost and complexity. But if you think how much a blueprinted carb costs…
Then show an exploded parts diagram of a carb to someone… I’m not convinced those two objections are as valid as we’ve come to accept. 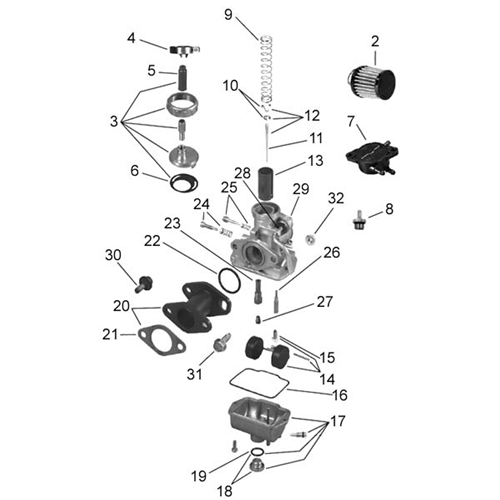 I will say though, this is a four stroke project for now. EFI on two strokes with expansion chamber exhausts is a totally different ballgame.

The Ecotrons 2 stroke EFI conversion kit has been around for a while now. Can’t speak to its performance.

The potential perfomance benefit of an EFI conversion kit is somewhat nerfed with the injectors being resigned to the intake manifold instead of at the transfer ports where they’re closer to the combustion chamber like KTM & Husqvarna. However, there’s still the advantage of active fuel-air ratio control.

Yeah there’s lots of platforms that can be used including Ecotrons, megaquirt, RusEFI and some random kit on eBay for cheap.

Ecotrons quoted me $599 for their Briggs Jr. kit.
Considering how rudimentary it is (No wideband support) and the limited tuning options for it, that was a very hard pass. Hardware has moved on significantly since it came to the market.

I’ve chosen Speedunio as the platform. It’s an open source design with incredible flexibility. That flexibility of course means things that can be added, but perhaps more importantly… things can be discarded.

One variant of the project I’d like to explore is a “spec” ECU. A custom circuit board design that does have reflash capability. Unless one cracks the sealed case open and directly flashes the chip… which can be detected in other ways.

First I have to get this prototype running. Engines should be here in a couple of weeks so I’ll use this time to work out as much as I can on the bench.

This system would support a two stroke application, but I don’t have any plans to work with that at this time. But someone else could.

For a few years we’ve been working on my Aixro UAS dirt kart with plans to make it EFI. Using a microsquirt for the engine management. Currently just have the ignition being run by the system. Last hurdle was building a charging system because the voltage drop was too much running the coil and it would cut spark past a certain rpm. The charging system fixed that. Next I have to build or have built an intake to better fit my throttle body which was sourced from a 2012 kx250f. Interested to follow your project!

Charging is definitely a big factor. If you don’t have a way to integrate a decent sized generator on there (typically 200w) you’re looking at having to use a large battery that needs to be charged between sessions. That’s a pain in the…

The fuel pump is a big (HUGE) source of power consumption too, especially with the systems being “always-on” return setup where the fuel pump is flat out all the time.

With this system we’ll test a non return setup with a PWM controlled fuel pump. Just like a modern car. A small circuit that regulates the system to 43.whatever psi.

The added advantage of this for karting/bike setup is the need for only a single fuel line to the engine.

I’d love to follow your project too, esp since it’s a rotary. Are you documenting it somewhere?

Here’s an example of a custom ECU circuit based on the Speedunio platform. The current board (Speedunio 042c) I have is for testing and is pretty big. A lot of the components are not combined where the could be, including the Arduino driving it.

Once we decide on what a V1 should look like and have, we’ll get a run of circuit boards printed (Usually MOQ of 10) and go test those. 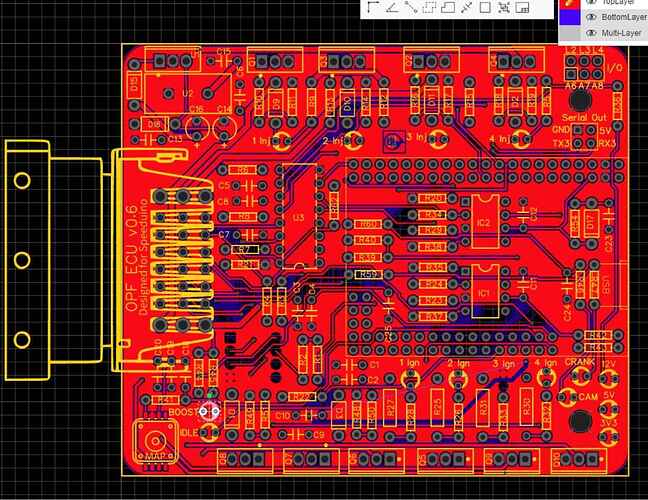 I haven’t really documented it anywhere at the moment. It’s been a very slow process. Mostly due to time available since Sprint is the priority most of the year and usually only do dirt for winter. I do want to get going on making the manifold. Think I’m gonna 3d print one using a CF reinforced nylon filament, see how it holds up. My plan is to use the stock fuel pump from the bike the throttle body is from which has internal regulating. Have to modify my tank to mount the pump into the bottom.

This board can be shrinked down a lot with SMT parts. It looks like the board is design to be more flexible.

Looking forward to the build and love to see a good EFI racing engine, maybe I can adapter this engine in my future hybrid kart build.

I strongly suggest using a MAP system instead of the standard MAFS for your airflow. MAP sensors require more work on the bench, but provide much greater reliability and function for racing. Unlike the MAFS, if you lose an airbox or get a leak in your plumbing, the MAP doesn’t care and will still function. MAPS are also better for a broader range of performance (F1 engines, and other high revving high performance engines will use them).

Regarding the matter of power generation, that is actually quite easy. Grab any off-the-shelf “brushless DC motor” and size the pulley/sprocket appropriately. The actual challenge is regulation. A diode bridge can rectify it, a cap can stabilize the waveform some. But you will need a reguator. Realistically, if you identify the normal expected rev range, you can size the motor to run in an optimal spot for your output voltage for a given current, and then let it drop below ‘operating’ (therefore be off) for the lower RPMs. This is fine for more simple/direct solutions.

I also recommend picking one motor to start with, and not worry about handling ‘extra’ motors until you finish the first one.

If you find the arduino platform missing or lacking anything let me know. I hate the Arduino line of products.

Also I think there is a nice incremental path to building this up:

In a weird variant system I am working on, I’m actually going to use the Exhaust Gas temp to help tune-for-power actively, but my control will be carb adjustment [non karting application in my case].

That’s prettymuch the process I’ll follow. Sensors > Cold start Enrichment > Fire it Up. No ignition control to start as I’ll likely only have a single trigger hall sensor. I don’t have the hall sensor on hand to setup crank position so I just moved on to TPS since I didn’t have a pinout for the connector anyway.

There’s basically two hardware platforms that I want to develop and release:

The final spec system may not even have a MAP sensor on the intake unless it proves itself to be useful with the single cylinder setup. There will be a “MAP” sensor for baro correction though. For the final system a lot of things are up in the air, the goal is to see what can be removed for simplicity. It will either be AlphaN or Speed Density, baro corrected. No O2 sensor. Not planning on cam sensor (therefore no sequential injection)… unless testing shows a compelling reason to use it.

I like the Speeduino platform to be honest, hard to fault it for the flexibility and functionality it does out of the box. Works with tunerstudio too so that’s a big bonus.

I have a handful of GX390 clones knocking around here, if I get a hall sensor and fuel pump in time I’ll try to make some noise this weekend.

This board can be shrinked down a lot with SMT parts. It looks like the board is design to be more flexible.

For sure it’s all about being a dev platform and it’s size is just fine for a car too. That large section of pin hole connectors is a proto area for any extra\custom functions you might want.

That market seems to be overlooked… or maybe doesn’t exist.

My findings have been that ‘small volume’ fuel injectors are (or were) hard to find at a good price. The injector themselves were usually the bottleneck.

For what it is worth, I like MAPS because they’re speed density sensors. 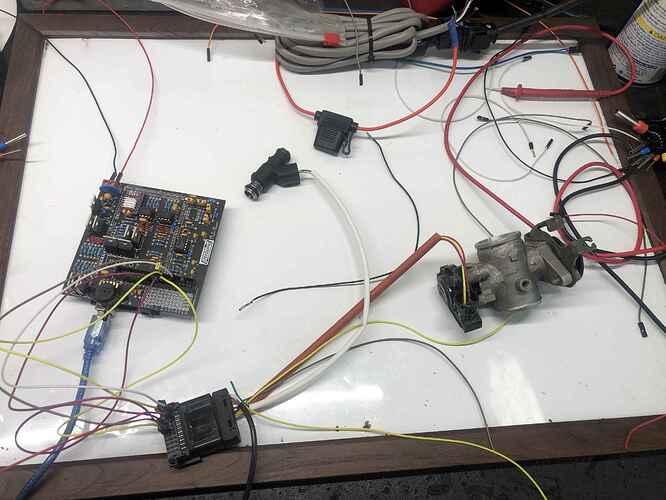 Looks nasty but it’s close to functional today. Crank sensor (Stole the Mychron 3 wheel speed sensor from my kart) is working, TPS is still good and injector is all set.

Hoping to make some noise tomorrow with the Briggs 206, or one of the 460cc clones I have. Mostly depends on which I can whip up a manifold for up the fastest. Plus the 460s are in storage, but the 206 is right here in the garage.

Fuel control only, no ignition yet as it requires a more finite crank signal rather than the single pulse per revolution setup (Flywheel magnet triggered).

If you know someone with a plasma table it’s easy to cut a custom reluctor wheel to use with a hall sensor. That’s what we did for the Aixro.

On that note…This is a great tool for designing trigger wheels. Doesn’t work on mobile.

Enter diameter and tooth pattern. It doesn’t the rest and gives you a file to be plasma cut.