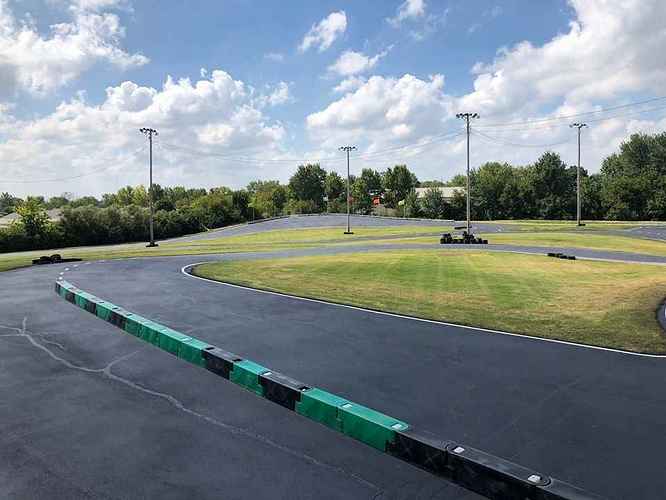 A team including former IndyCar driver Sarah Fisher has acquired Whiteland Raceway Park in a last-ditch effort to prevent the karting track from being bulldozed.

Fisher, her husband and business partner Andy O’Gara, and businessman Willis “Wink” Hartman announced Friday that they bought the aging track from Mike Swails and plan to renovate it. Hartman has been a longtime investor in Fisher’s racing efforts.

Terms of the deal were not disclosed.
The new owners said a real estate developer had been prepared to buy the property for another use.

“When Andy called to tell me that Mike had offered us the purchase of WRP, we immediately agreed that investing in the karting community by reconditioning the facility was an obvious decision,” Fisher said in a written statement.

WRP, founded in 1958, bills itself as “America’s oldest kart track.”

“First and foremost, please know that our ultimate goal is to restore Whiteland Raceway Park to its former glory,” the new owners said on Facebook. “We want to preserve the history and heritage of WRP while bringing new life to the facility.”

The owners said WRP will continue to operate throughout the remainder of the 2018 season. Three races and a number of open practice days remain on the schedule. The Sept. 22 race will be rescheduled so renovation efforts can begin.

Fisher and O’Gara also own Speedway Indoor Karting, just blocks from Indianapolis Motor Speedway in Speedway, which opened in 2016.

Whiteland Raceway Park is now under new ownership! We know you have a lot of questions and we will do our best to answer them, but please be patient with us as we work through everything.

First and foremost please know that our ultimate goal is to restore Whiteland Raceway Park to its former glory. We want to preserve the history and heritage of WRP while bringing new life to the facility.

We can’t thank everyone enough for their support through this process. We are hopeful to have open practice days by the end of the month and have every intention of keeping the final two races on the schedule as is! We want to start with our best foot forward. That being said we will have to reschedule the Sept. 22 race as we begin the revitalization process but will have a new date coming soon.

In the interim we will be making the following enhancements to WRP:

This is just the beginning! If you see us out and the gates are open please feel free to stop by and check it out for yourself!

Details on the Oct 13th and Oct 27th races will be released in the coming days but there is some very exciting stuff in the works here!

We will posting prices and other details soon but be on the lookout for discounted standard rates for the remainder of the 2018 season.

We will do our best to keep everyone posted and to answer any questions throughout this process. Please be patient for us though. We are working very hard and want nothing for the best for Whiteland Raceway Park.

Wow! We are so overwhelmed and amazed with all of your kind words and comments over the weekend! We ask that you continue to be patient with us as we sift through all of them and try and answer as many questions as possible.

We have answers to a few of the most commonly asked questions below. If we haven’t answered your question yet, please feel free to comment again or send us a message. We may or may not have a concrete answer for you yet, but we promise we are working on it.

Also check out some updated photos of the track after it was seal coated over the weekend.

We unfortunately have a conflict with the 10/27 endurance race date so that will be rescheduled for 10/20 or 11/3. We will post an updated schedule to discuss the potential rescheduling of the 9/22 race and other open practice dates.

We hope this brief post of info helps everyone. Again, thank you so so much for all of your support and encouragement. Please be patient and we will continue to share as much as possible, as quickly as we can! Stay tuned and we will see everyone very soon! 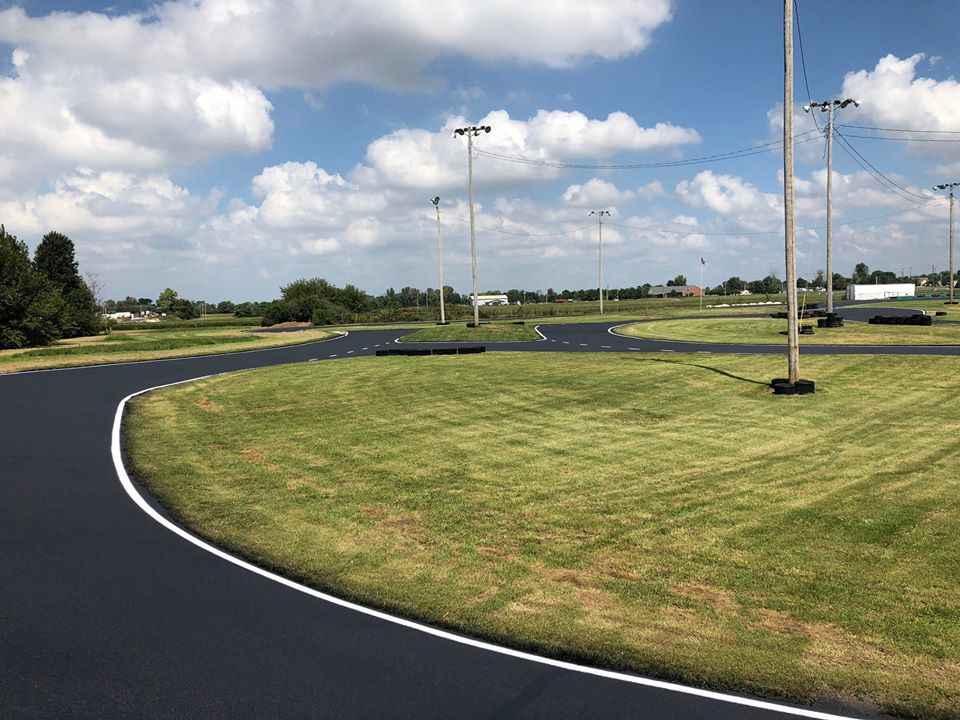 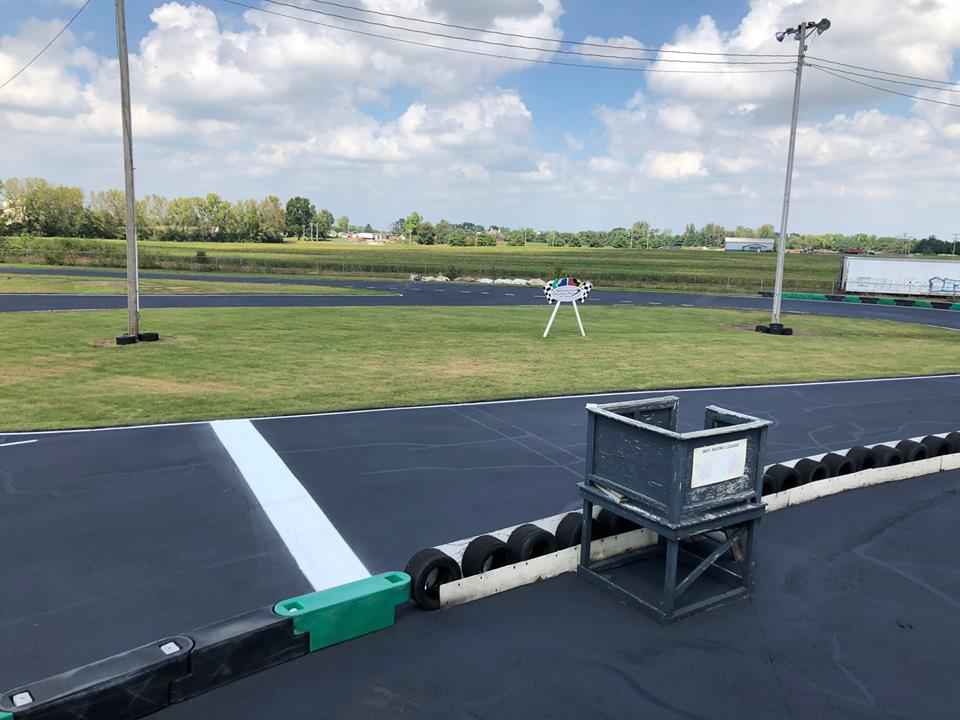 Looks great. Hope they put something around the light poles though.

From the looks of it they resealed the whole track. Has anyone ever ran on a reseal? Curious what the grip level is like. I know the drive way gets stupid slick when its done. Could be the low dollar product I used too

No web site, any ideas what classes they ran/run?

Has anyone ever ran on a reseal?

Yes, my local track has recently resealed. It’s like an ice rink. Will be curious how quick it rubbers in.

Yamaha can, kid karts and i believe clone for sure. im assuming before fisher bought the track the turnouts were horrible. I was one of two people to show up to the august 25th race. That would have been my first race at whiteland but it was canceled. I live 10 min away so ill update back after the practice on the new sealed track this weekend. I have a feeling there will be quite a few people there

Hoping for the best but they are competing against two other well established programs within 90 minutes that get good regular attendance. Interested to see if it effects KRA or OVKA fields next year.

My home track, Circleville Raceway Park, is starting back up a sprint series next year and while I’m happy to have something closer to home (45min) the OVKA and KRA programs are such well oiled machines it’s going to be hard to pry me away from them.

From what I’ve gathered, Whiteland will run a cooperative schedule with KRA.

That said, I ran open practice today and it is slick. Three more open practice days before their first race under the new owners. $1000 to win 206 and Yamaha Can.

Looks like a class structure of KRA with 80cc shifter thrown in.

From what I’ve gathered, Whiteland will run a cooperative schedule with KRA.

That’s good to hear. With the short season in the Midwest it’s even harder for tracks/series/clubs to avoid conflicts. 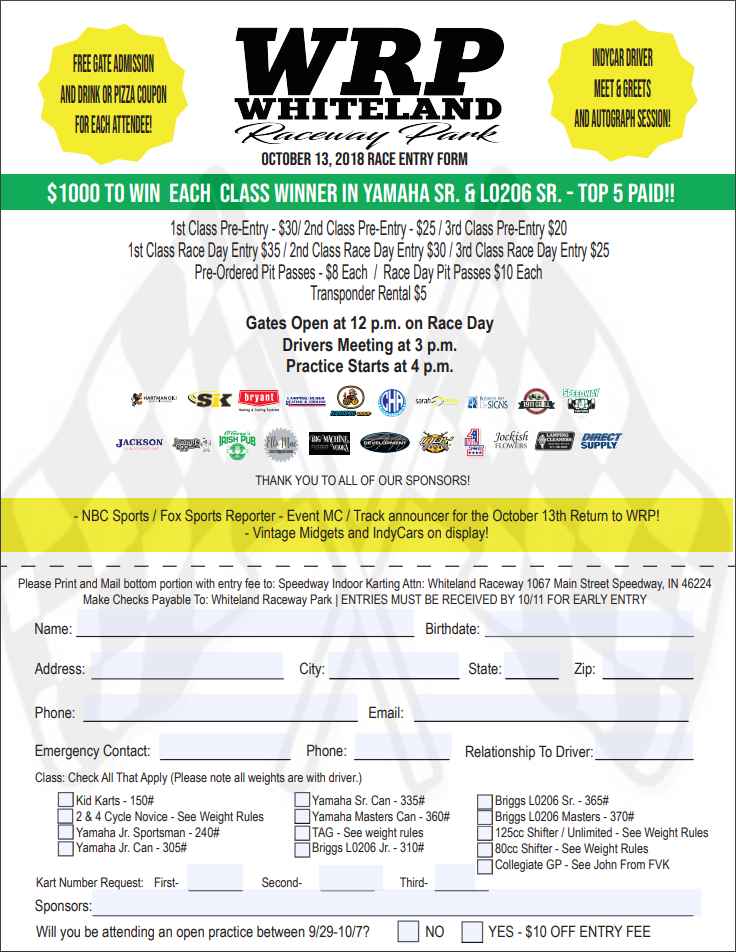 Wow this is big (the attachment)

Oh, wow, that looks cool, is there a link to the rule set?
Might have to change plans.

bumping this up to see if anyone has gearing targets for Whiteland?

Specifically looking for KA100 but if you can give me Yamaha gearing I can get close enough.

10 driver and 81 to 83 for yamaha on the standard track layout. Personally i like an 83

Theres only like 4 KA’s that show up. First race if the year i was thinking Yamaha would have 12-15 karts like last year. Nope there was 6 of us and one was Masters. Yamaha is basically dead

Our Yamaha counts at OVKA have been down this year too but Masters had 9 last week, think Sr only had 6.

We will be at Whiteland in 3 weeks if you want to come join the fun.