While I was at the Supernats, I snapped some pics and got some details on the IAME Super Shifter that being developed for SKUSA competition in 2019. There may be some changes between now and it’s official release, but from what was described to me, the package on display was likely what will hit the market.

The carb is still under development according to Tillotson, but at this point they are working on finer points. 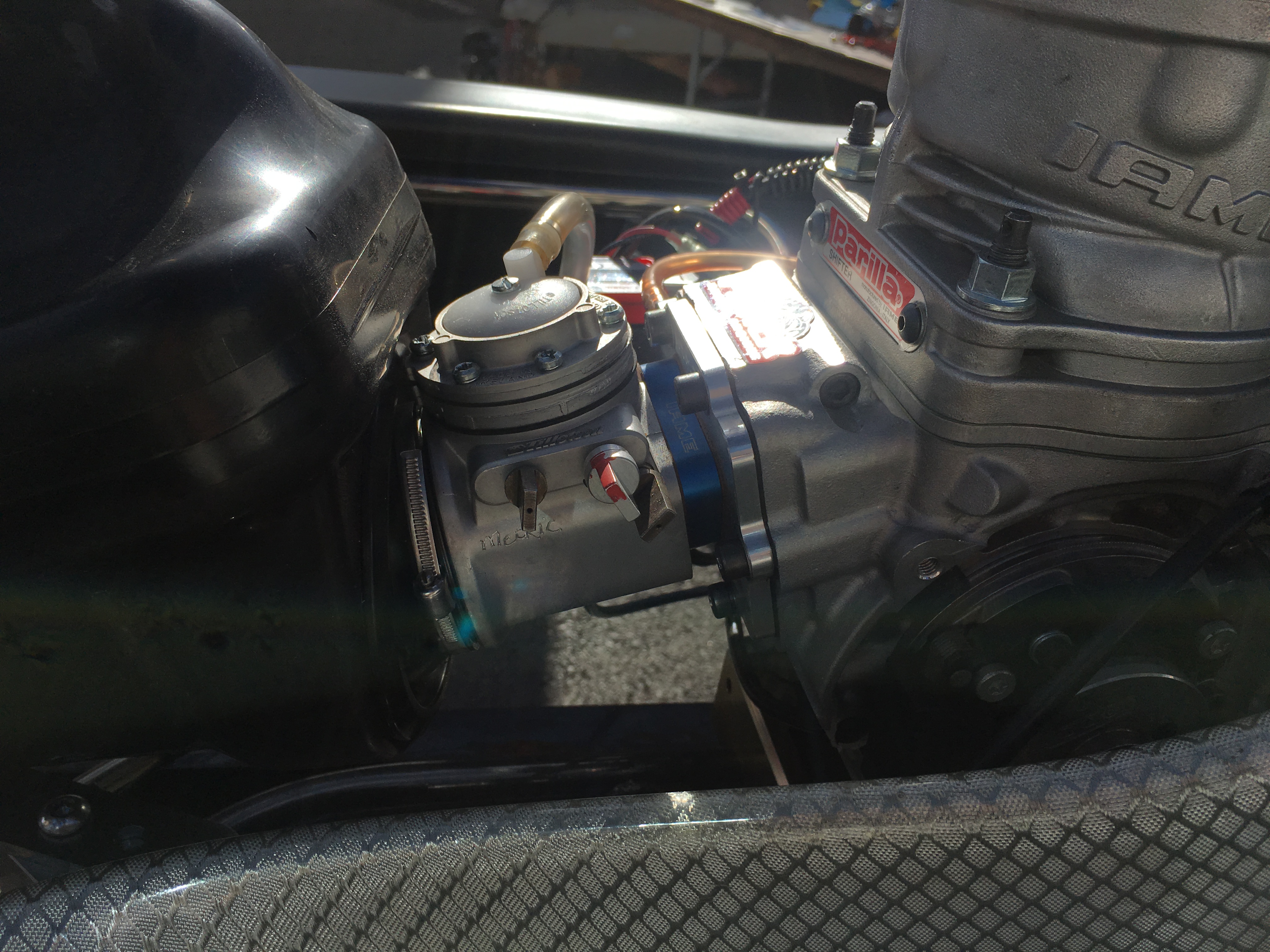 Utilizes a regular crankcase nipple along with an adapter plate to provide the (integrated) fuel pump with it’s pulse. 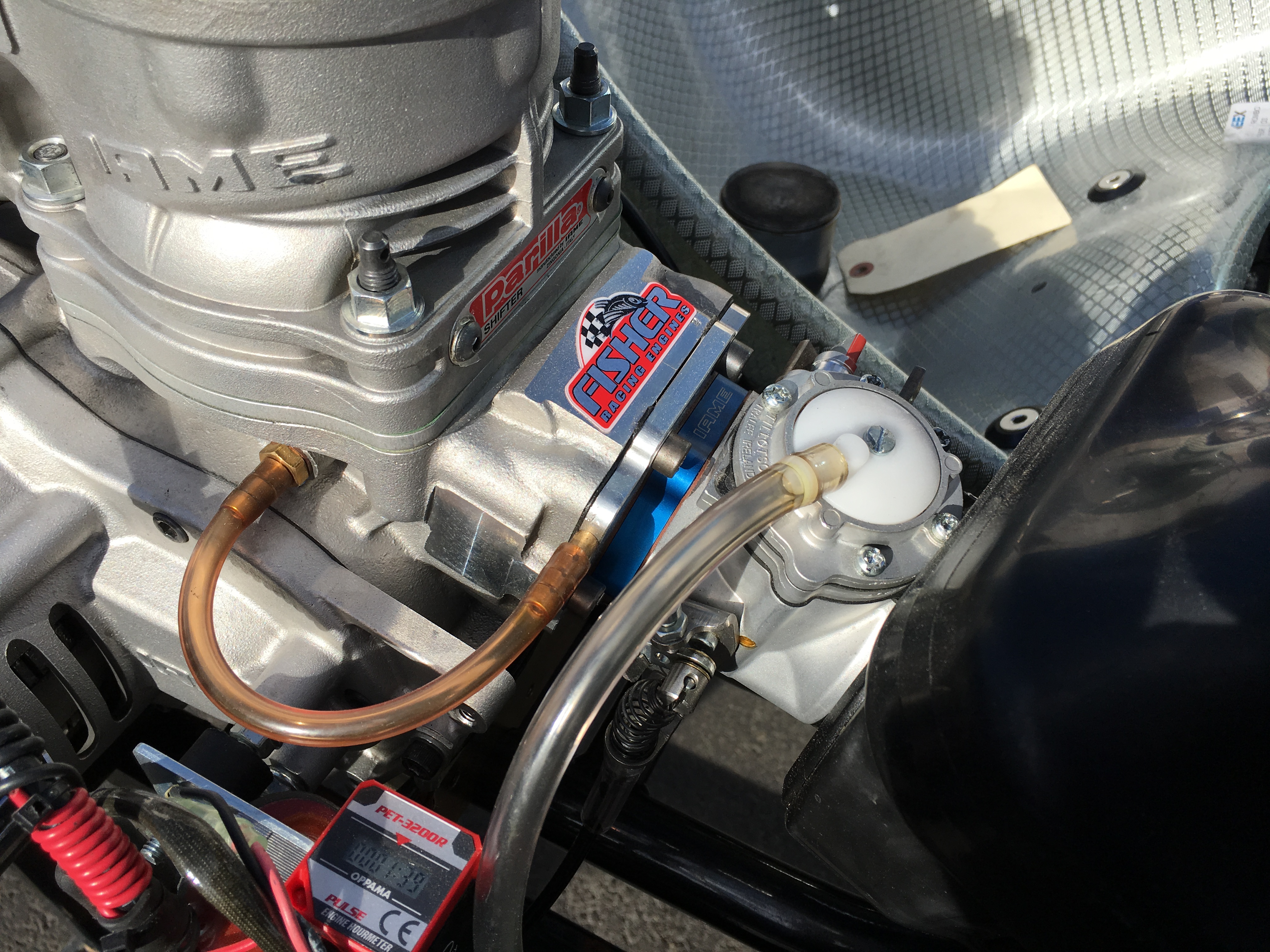 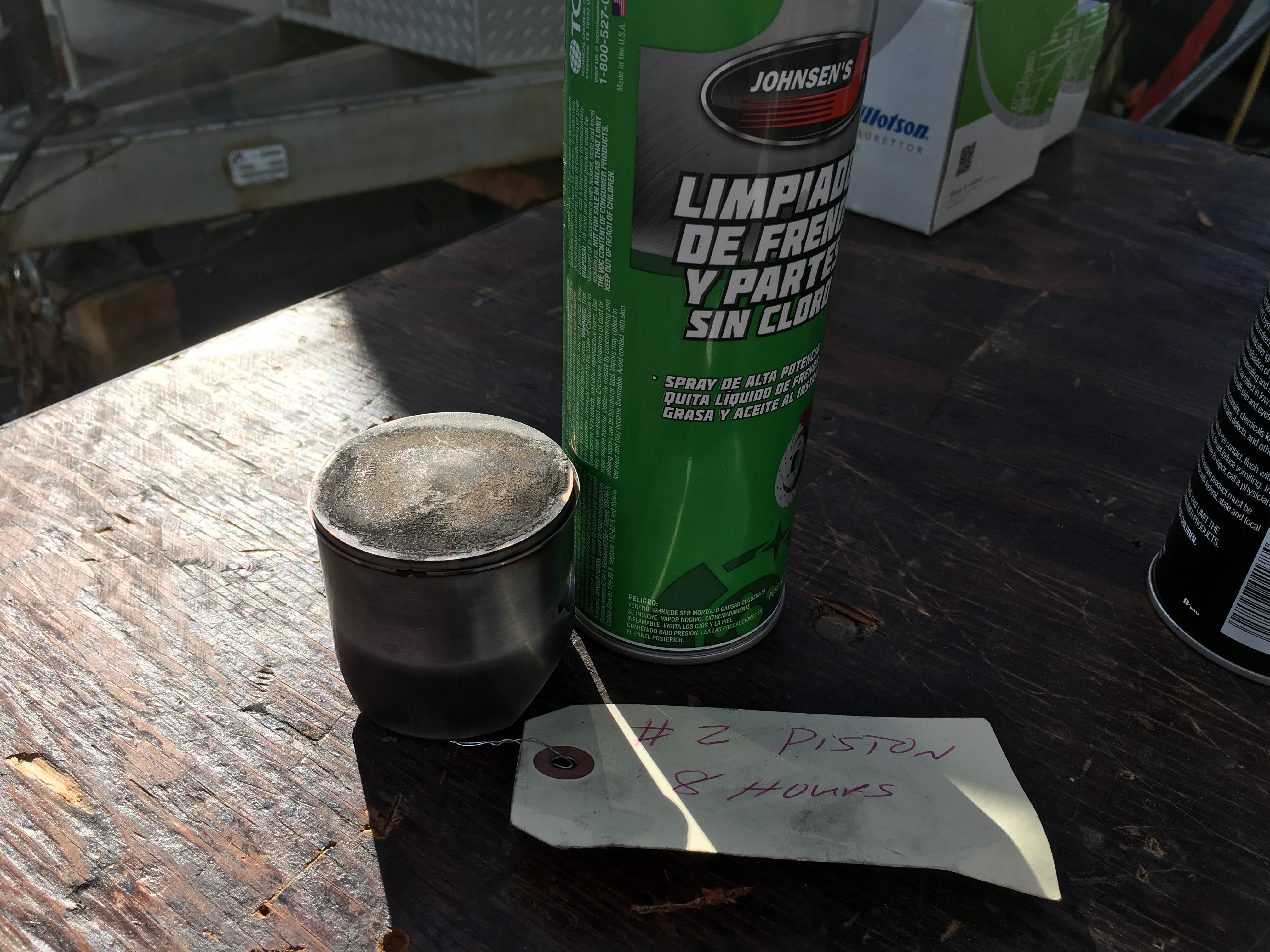 Complete package from the front 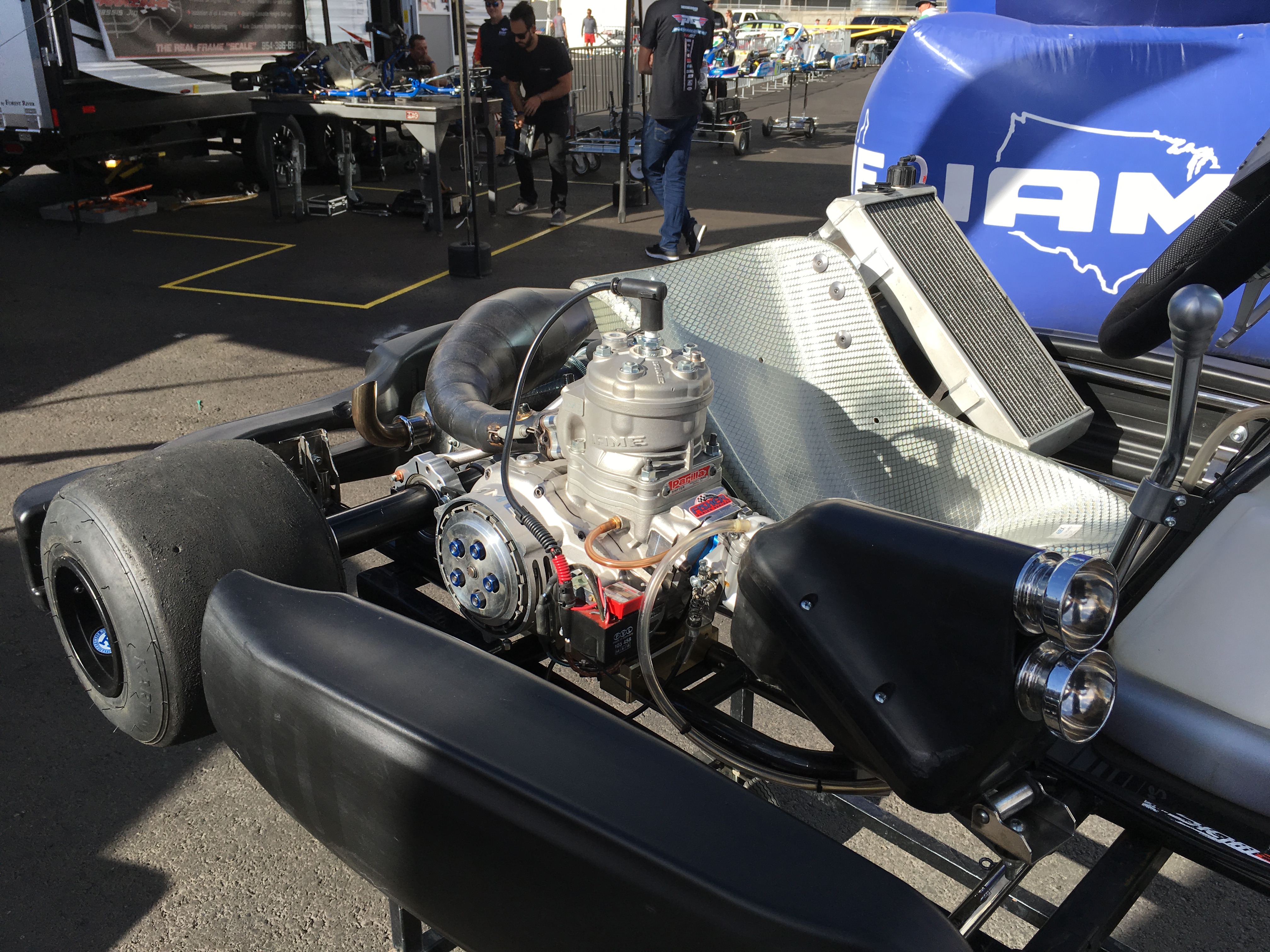 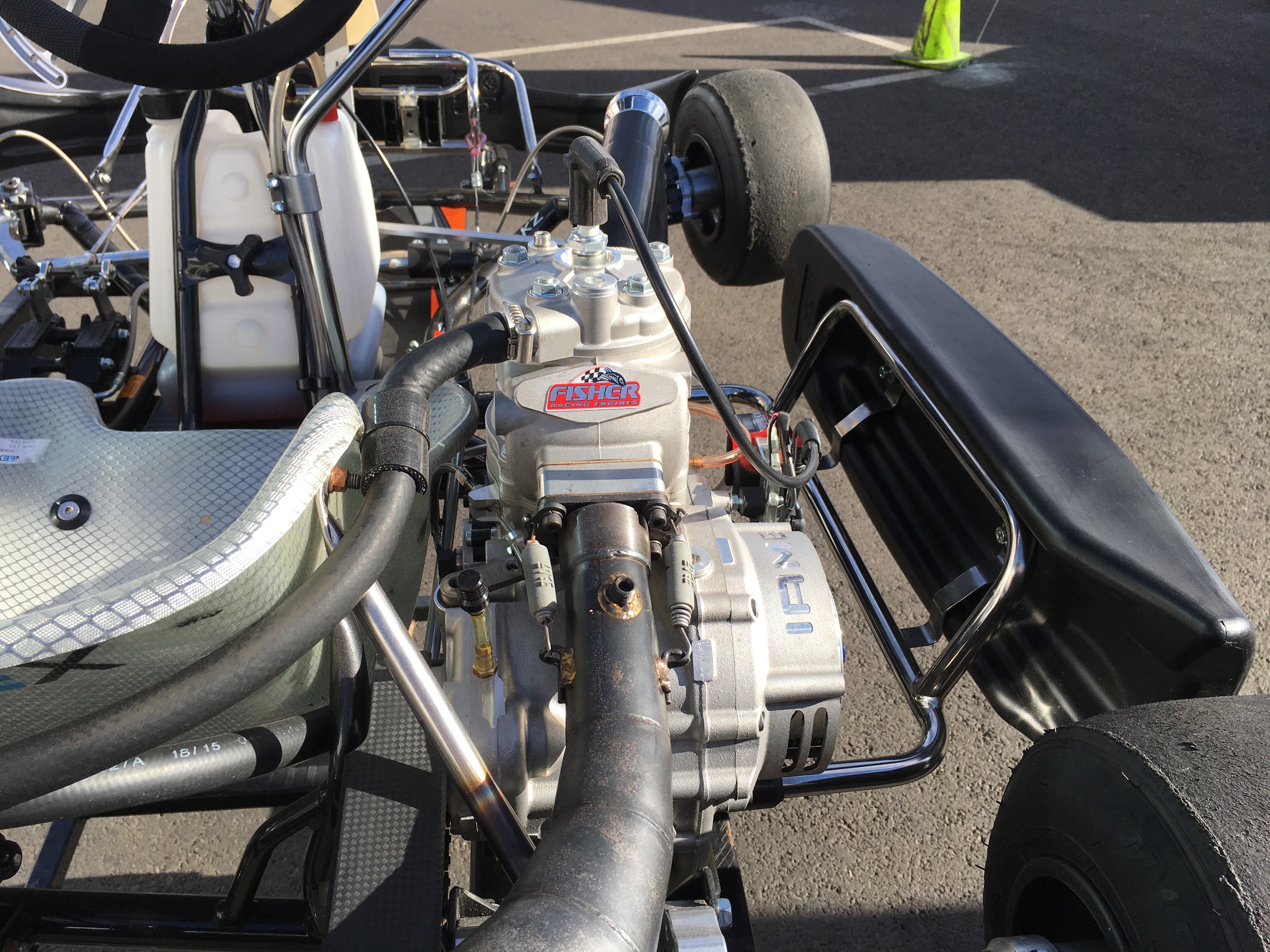 Hope they keep the starter motor

A starter is not part of the standard package, but will be available as a $500 option for those who want to add it.

Good to hear it’s an option. Thanks for following up on this James.

What is a qualified persons opinion of the piston?
-Was it running lean/rich?
-Expected wear on skirts for hours?
-Lots of build up on the top is this from the type of oil?
Any thoughts would be appreciated, as I would love more info on it.

In retrospect I should have taken more pictures of that piston… 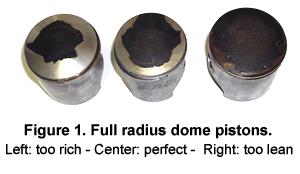 Additionally, the pattern shape is excellent showing good and even flow from the intake ports.

-Expected wear on skirts for hours?

-Lots of build up on the top is this from the type of oil?

I thought it was normal, but I tend to work with motors that run castor based oils. Additionally, there was no carbon buildup or signs of heating underneath the crown.

$5900 is definitely not an insignificant price tag for a motor unique from any of the other shifter motors around; it being 175cc and not 125. Of course, the argument can be made that your current '01 cylindered Honda cr125 package goes beyond $6000 when you factor in all of the other components to make it go, and competitive, and that’s a very valid argument.

Still, it’s quite a gap from the Vortex Shifter and it’s retail price of $3600 that I see being listed as right now. Is Vortex underselling trying to get a market share? Or is everyone else marking up their products?

The big issue I see is, if I were considering to buy this new IAME engine, is a matter of trust. If I bought the motor at that price, I’m trusting that the concept will succeed, and that they’ll be a place to race this engine for a very long time. And not just SKUSA; I’m sure the various tracks, series and orgs. that are friendly to IAME would welcome this engine with open arms. But there has to be other places besides SKUSA to be able to race it to make it worth getting one.

It’s why I’m curious about how many components does this share with any of the other IAME engines, if there is any at all? If this concept doesn’t work out in the end, can you fit a different cylinder on it and maybe a couple other things and still be able to race it elsewhere? Or are you stuck with a $6000 paperweight? Doing a little searching online, the bottom end, at least the outward appearance of the crankcase, looks very similar, almost exact, to their KZ-classed IAME Screamer. Is that what the engine is, a KZ with a different carb, digital ignition, and larger cylinder?

I get the reason why they go to a larger sized cylinder than what is typically raced. But knowing that your engine isn’t useless and you don’t have to buy a brand new one, if the 175cc Super Shifter idea ultimately doesn’t work out in the end, gives someone more reassurance to take the plunge.

The list price for the adapted engine package will not be the $5900 price you see now. Increased ordering volume and production will drop the price substantially. The engines available now are not what will be released for SKUSA. “We will be releasing the engine in end of 2018 early 2019. We don’t have a set date yet or a set price.” says IAME. Although we’ve had a lot of fun at eShifter with the current Super Shifter engine,

The actual package will not be the same. Personally I expect a price tag to compete with the ROK.

Hi James, I’m merely relaying the information given to me by Tillotson and IAME at the Supernats.

I do think it’s fair to say there will be some changes between now and when the “SKUSA” package is officially available (Vs the "standard X30 super shifter from IAME), but from what was described to me, it’s minor nuances at this point.

I agree with your sense that the price will come down some, really it will have to with the Rok being priced so aggressively right now.

Fuel pulse adapter plate
Utilizes a regular crankcase nipple along with an adapter plate to provide the (integrated) fuel pump with it’s pulse. 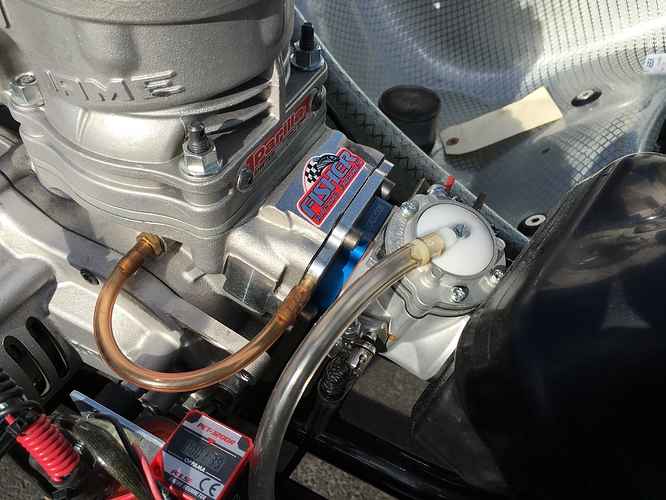 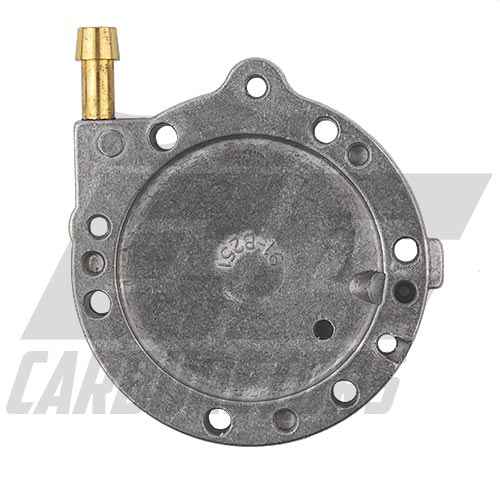 There may be more to the existing plate that’s sandwiched between the inlet and carb, I didn’t get to pull it off.

The carb is being developed by Tillotson themselves, so I’m guessing there’s either a reason they didn’t use that pulse part for a reason, or perhaps that’s something further down the line.

Hey im wondering were i could get the SKUSA IAME 175cc super shifter 500$ extra electric starter?

Now I know that the SSE is based off of the already existing IAME 175 Super Shifter, which comes with a on-board starter. If you’re looking for a starter for that specific IAME model, possibly the retailers that sell the 175 Super Shifter model (as opposed to the SSE) might also have parts for this, starter included. Otherwise, I don’t know who else in the US, if that’s where you’re located, might have one.

Maybe you could order one from IAME direct in Italy. Shipping will be a killer though.

That SS would need a carb & ignition swap to be SKUSA legal. Looks nice, though.

The SSE doesn’t have the starter mount built into the bottom end cases like the European SS does, as well as probably a crank-mounted gear for starter engagement.