I mean if the pipes have some variance in them you can buy 50 and find the one that’s closest to what you want.

Back when I raced SBD there was a kingpin that had to be supplied by the organization, so what we would do is buy 100 or so of them, and measure all of them until we found one that was the shape and size we wanted

After the ceremonies on the track, officials penalized Grice for contact, putting Power onto the top step of the podium. However, Power would not make it through tech with a squish issue, removing him from
the results. Then, Grice’s penalty was overturned

So Power was given the win, then failed tech, and they re-instated Grice. I wonder what criteria they penalised Tom on in the first place…

Some wild and entertaining action for sure on the weekend. Also some serious punts and wall bashes, but I guess you’re going to get that on an event this important to people.

My opinion on the RPG pipe issue: think about how much prep and work a team that large is doing for an event like this. Coordinating for that many karts and drivers just to get their karts there and prepped must be insane. I don’t think they were taking the time to measure individual pipes, but instead knew they wanted fresh ones to have the best performance for their customers. Sounds like one or more may have been wrong (not all 50 went thru tech), but unless there’s a statement saying the pipe was modified I’d have to think it was an accident.

. Sounds like one or more may have been wrong (not all 50 went thru tech), but unless there’s a statement saying the pipe was modified I’d have to think it was an accident.

I don’t agree that a lack of statement implies an accident, in fact it’s the opposite. There’s no immediate imperative for SKUSA to release anything publicly if the exhaust was modified (if you’re doing an investigation, the you will stay quiet), there is an imperative to release one if the supply was out of spec (assuming confidence is high this is actually a factory issue). You can’t guarantee this issue is isolated to those 50 exhausts, thus a technical bulletin and statement will have to be put out, and you also need to alleviate reputational damage to the affected driver.

The third option would be damage, or something coming loose. For that I’d expect a statement form the team/driver pretty quick. Something along the lines off “great weekend but ruined by a spring falling off” as we’ve all seen a million times before on FB or whatever.

I have seen variable compression cylinder heads that would change squish values based on a two step tightening system at FIA World Championships.

Absolutely not pointing the finger at anyone, but implying that people would not go to absolute extremes to win is misleading.

I have seen variable compression cylinder heads that would change squish values based on a two step tightening system at FIA World Championships.

Guessing the gasket takes a set at a certain torque value. Continue to tighten and it continues to squish reducing the gap.

I misspoke. i didn’t SEE it myself, as it was long before my time

I believe the head had a two step “setting” based on its positioning in relation to the cylinder studs (so a very very small area to play with). A little off centered left was “legal” position, a little centered right was tighter and lower

I understand there always has been and always will be cheating in racing, intentional or not.

My point is that I can also see plenty of opportunity for the pipe to be an accidental issue. I bought a new pipe this year and I didn’t measure a thing on it. I went under the assumption it was good to go because it was as delivered from the factory which is what the rules state. Thankfully it passed the rigorous tech noted above, but had it failed I would have had no idea how or why.

Wonder if this turns out true, will we be heading down the path of serialized headers?
I know normally for KA/X30 tech we had to run the engine seal thru the header nut so you can’t switch it out during the weekend. Not sure if this is the same for SKUSA.

My point is that I can also see plenty of opportunity for the pipe to be an accidental issue.

I heard that they were running relatively high pressures. Were there any numbers for pressure floating around?

I didn’t hear anything, but it isn’t totally unusual to run a bit higher there. Not crazy high though. But the parking lot track sometimes takes some pressure to get temps up.

Does anybody know what happened in Pro Shifter under the red flag? Aside from Wick and Formal, there was also a group of drivers that got DQd for what it looks like a red flag procedure infringement, abandoning kart on track, working on their kart under the flag etc

I’m not really getting the what they do to the pipe (Not RPG, but the ones that cheated in KA)

They cut the cone (K) and move it closer to the starting section of C… and therefore make T shorter, but still within the .7 tolerance? Shorter exhaust is more top end power right? 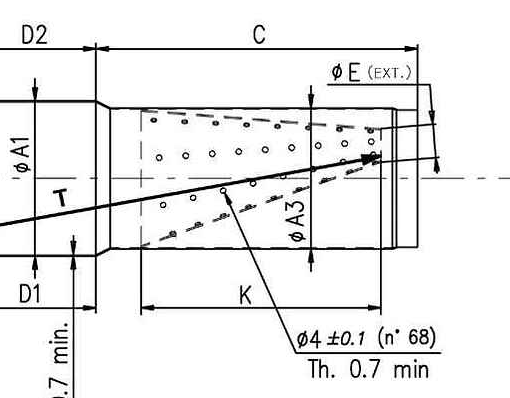 on the KA pipes they were cutting at the right edge of “L”, just before the divergent cone portion of the pipe. Notice the spec on “L” is 270 +/- 5 so they were making sure all of the pipes were coming in right at 265 giving them the shortest possible header or what would have traditionally been referred to as flex section in non-fixed pipes. Shorter the flex the more top end power the motor will make.

You can do alot inside the rules for top end power in the pipe change cone offset/reversion amount/etc… but most of all you can change the little holes in the pipe to increase flow and infact you can increase flow in a singular direction.

I have heard there’s another vendor where these pipes are coming from, also this weekend there were plenty of engines that typically have no stickers on them that had other engine builders stickers put on them. If I was one of the other builders I would not be happy.

Care to elaborate further on this? If pipes are not coming from IAME, who are they coming from?