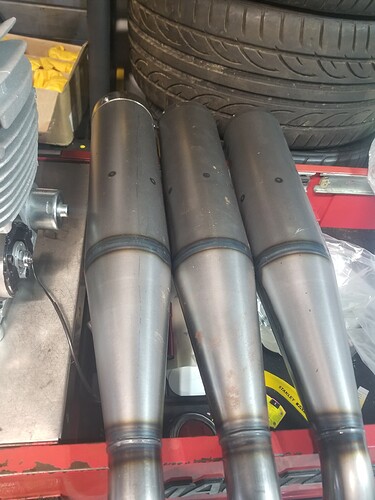 2 VLR pipes and a KA pipe for reference.

Wonder why Vortex has a tighter tolerance then IAME. 2.5mm(1.5+1) vs 5m based on the fiche

5mm seems like a large variance, or I just don’t understand the challenges of making these in larger quantities.

Probably the latter, but still 5mm seems like a lot. That’s a flex length adjustment worth.

Billy Musgrave was disqualified for putting his tape back on the radiator under the red flag.

That’s absurd. How is that any different than removing tape from the radiator while on track?

I guess technically it’s not any different, but should have been done under green.

Wow, that’s harsh. By that logic, if you had a radiator curtain, then you are good because you are “operating”
a part of your kart instead of “modifying” it? That’s a little bit of a stretch to me…do we know about the others as well? Similar reasons?

It’s still “working” on the kart during a red flag, but that’s a pretty pedantic interpretation if you ask me (especially to DQ).

Billy went from 31st to 14th in 6 laps before getting DQed. If they’d had the courtesy to at least wait until he’d gotten to the scales after the race, the last feature of the SuperNationals could’ve been a lot more eventful.

Any updates on the issue related to the IAME exhausts?
I have seen some comments on the latest video by Ryan… some are not very nice with regard to him getting DQ.

This made me lol:

Any updates on the issue related to the IAME exhausts?

Not too much to update. But there’s a lot of rumors floating around. We went over the facts on our KC Happy Hour episode after Vegas, but here’s a short summary.

Now, the reason for this tolerance change:

In theory, if you built your motor for bottom end speed, then ran a shorter than normal pipe to make up for that with a top end heavy setup, you MIGHT have an advantage over the field. No data here. But hard to believe that it would be massive.

What does all this mean:

There were cut pipes, 100%, but to think RPG intentionally cheated Norbergs engine with something that has been a big deal for the last couple of months at THE biggest race is laughable.

Agreed 100%. Cheaters aren’t stupid. No matter what you think of RPG, thinking this is a “gotcha” is silly

In theory, if you built your motor for bottom end speed, then ran a shorter than normal pipe to make up for that with a top end heavy setup, you MIGHT have an advantage over the field. No data here. But hard to believe that it would be massive.

Intersting.
Could you or someone elaborate on what is meant by “built your motor for bottom end speed”?
To my understanding, you can change the power band of an engine by playing with the base gasket thickness which in turn will alter the port timing & squish gap.

So a thinner base gasket will increase squish gap (more compression) & lower the port openings, and therefore give you more or less top end? If it gives you more top end, you could compensate the mid range power with a longer exhaust length?

This is going really off topic now, but hearing all this great info seems to me like a good new topic for 2stroke tuning (within legal rules)

I would argue that the overarching main goal for low power single make platforms like the x30, which also are usually characterized by a high compression ratio relative to their architectural design, is to free up the engine and its capacity to rev as high as possible as early as possible. Performance wise, the edge will be won over someone else’s engine which has a harder time reaching its redline over a given distance.

If you ever have the opportunity, i’d suggest grabbing the crankshaft of a built x30 (on both the sprocket side and the ignition side) and wiggle it back and forth. More often than not, a good engine will have a lot of play in this area.

In terms of whats allowed in the regs, you have a max port height which can be changed by the cylinder gasket and you have 2.5 degrees of timing to play with, based on how you tighten the stator

It’s funny you posted that image. I was thinking about rollerblades the other day and how they are all gone now, like they never existed. I think the world is better off with just standard roller skates.

As a skater, we dug it when someone would rip up the park/bowl/ramp on regular roller skates, however.

Some examples of the cheating in X30 is more coming down to coils, cylinder liners, recoating pistons, and fuel additives. There is also a banned engine builder building engines and putting other builders stickers on it too, so theres that. Karting is a small world and people love to talk, so these things hopefully dont last forever.

Spec racing as an idea is great, but we are seeing the reality after people take advantage of it, whether it is buying mass amounts of product or taking advantage of grey area and now black and white areas too. For many of those in the industry playing these risks to win can earn them amounts of income that is hard to turn down.

As a driver I would want the honor in my success knowing I was on a fair playing field. Unfortunatley many of these parents are adopting a win at all cost mentality which has pushed a karting budget to 120-200K a year for those doing the national events with big teams.

Let’s start a new tent program called Cobra Kai Kart Dojo and cheat like we breathe. (Looking at you Furarri).

You don’t need to start a new tent program for that, plenty of “teams” already operating that way, but not the ones everyone thinks are.