So today I heard some rumors that the Tillotson 225RS is going to start showing up at tracks in the PNW. I’m hearing PSGKA will have a class and rumor is other tracks are considering it too. From what a friend told me he sees it as a cheaper and more powerful version of a Briggs World Formula engine. I’m curious to hear thoughts here. I’m a bit frustrated as it seems like it’s going to steal entries from Briggs WF and eventually kill that class, especially if this engine proves to be less expensive. @DavinRS have you heard anything?

Would also love to hear from any of you who have run the Tillotson 225RS. I’m looking to put it on a Kosmic Mercury R chassis and would love to hear others experience with the engine.

Is anyone else seeing traction with this engine in other parts of the US or Canada?

When I hear “cheaper” all I can think is for how long? Long enough for everyone to have spent a pile of money and then the next ones comes along.

I’d be down to run a tillotson 4-stroke. It looks lighter and I think it’s a bit beefier than the lo206. Seems like a great package.

The Tillotson is just another Honda gx200 “clone”, albeit this one is a little higher displacement. They did beef up the bottom end some by adding material here and there which certainly helps. I personally am not a fan of another engine package, nor do I think it’ll gain any large popularity in the NW (or anywhere in the US) unless something awry goes on with Briggs.

I’d agree with Ricky on this. Personally, I don’t think that 206 needs the dilution, and I don’t think it’ll replace World Formula from a class need.

But this is a typical karting trend. Something works, and someone tries to force in a new engine, and it just splits a popular class.

It’s definitely is plausible given that Marty Casey seems to be an advocate of the package and is based in PNW. Also PNW seems to have it’s own unique classes (or engine packages) that are not found in many other places such as the PRD Galaxy, X100AC and X125AC.

No doubt there are some racers looking for a bit more power than the 206, but don’t nessacarily want to go the route of other packages of World Formula or KA and would like to stay with something sealed, clear ruleset, four stroke OHV.

That’s where I see the Tillotson fitting in. That said, I find myself confused between the different Tillotson engine models in displacements, carbs etc. etc.

I’d like to think that with 206s flowing again we’ll see growth in 206 while some transition to other classes. I’m an optimist. How many drivers will really make the jump from the 206 program (To me it’s more than just an engine package, it’s a program which is why it’s seen success) remains to be seen.

We might be seeing the levee break in the Northeast. Marco is apparently running Lo as a sort of trial at events at his upstate track. I guess with his track’s proximity to Canada (and their strong Lo program), it makes sense. Tim has the ignite spec series at OVRP. It’s a start.

I get the impression that there’s small tracks sorta alone out there that are typically the places that run the oddball packages. Like the place that runs the subarus that Dean? spoke about.

I’m guessing they made these decisions in a vacuum, ie no traveling series, just a track with a club. The package is whatever because it can be.

I am guessing dilution doesn’t even enter into their thinking, it’s just so not relevant to their scene?

Yeah, I think this is who I was seeing push the Tillotson. Remains to be seen how many tracks pick it up but Kart-O-Rama is offering the engines now and I’ve heard of a few people from the Portland area starting to test the engine. There’s a rumor that PGP may have a winter series class with this engine as well.

I’m with @DavinRS that class dilution is a bad thing.

Like I discussed before, my track was a Subaru distributor back in the day, so the 4 stroke class is all Subaru. But they stopped making that motor In Japan, and the Chinese knock off has quality concerns so they will be a dying breed. I think the only reason they haven’t switched over yet, is the crazy amount of money they all seem to have in their Subaru motors in perfromance upgrades (North of $3000 in alot of cases).

The Tilly platform is something I’m interested in, but where I’m at nobody runs them. I know there is a class of them in I think someone said Orlando? But the LO206 classes are so dominte here, that unless I lived in the shadow of a track like Orlando, with its own growing Tilly class, it’s not worth trading up because you can’t run them anywhere else. That is one of my barriers of entry that I struggle with because I had been toying with the idea of keeping my 206 but picking up a Tilly as well.

We saw some of the Tillotson engines up at the Miller race. Unfortunately they were all running on the Sprint track so we could never get a comparison with the WFs. Package looks nice but you never really know how things will go until people lean on them for a while. I know Briggs has made lots of various small improvements in the Animal/WF/LO206 package over the years, will Tillotson be willing or able to do the same? A supply line from the other side of the planet has always been a tough thing to deal with. The people working with the regular clones have been dealing with this the whole time, China makes what China wants to make. Kart engines are a pretty small part of what they sell. 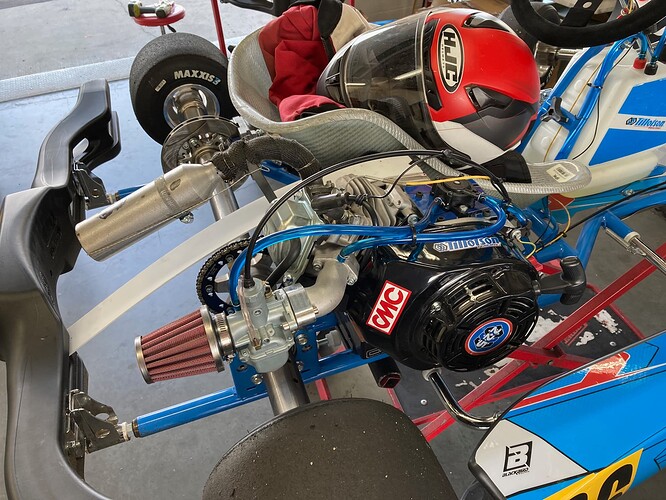 I just saw that PSGKA is lumping the 225 in with World Formula this Saturday/Sunday for their club races. Will be interesting to see how that goes. I wish I was free this weekend and could go down and run but have other things I’ve got to tend to.

Personally, I’ve always thought that not aligning engine and tire packages up with what’s nationally popular, just makes it more expensive and challenging for out of state drivers to want to come to race at local tracks.

Why would I want to pay extra money for a set of tires I can only race at a track that I might visit once a year, or an engine that I’m only going to run at one track to be competitive? I wouldn’t. No one would.

But (shrugs). You just end up creating a bubble that will deflate, if people decide to go do something else, other than karting.

Ill be there. Its only being run together due to not stretching the race day. As of now I think both the drivers are pretty inexperienced and it will be in the rain. So who knows how it will go.

How was the race? I had some other things to get done so couldn’t make it. I’m seriously considering grabbing one of the 225RS’s for the PGP series to run both classes. More seat time is definitely needed.

It was hard to say truly as both drivers were super inexperienced. However. The tillotson looked stable. The power delivery seems to be amazing. Very linear. I haven’t decided what motor I will run for pgp

I got a lil buddy who races these in the Netherlands. Apparently the tillotson 4 stroke is popular economical class in Benelux.

The T4 complete package along with the T225 engine class being run in the US are desinged to make karting fun and affordable. As a monobrand, the complete T4 package takes 90% of the kart setup variable out of the equation and really makes the race about the driver. There are a few things you can tinker with (gearing, rear axle length), but even there we encourage racers to share information to make the racing as close as possible. The T225 class allows drivers to use different chassis, which some people feel is an advantage, but the T4 chassis is designed to complement the engine, so we feel it is still the best combination out there. We work hard to keep the category affordable. We set the price based on a reasonable profit level, about 25% at each level, a little more on spare parts, so you shouldn’t see prices rise unfairly. We also put a lot of the proceeds back into prizes and supporting the classes.

I wouldn’t call the engine a GX clone. It’s based on the same geometry, but all of the key components are specially designed for racing and the digital PVL coil and our own Tillotson carburetor makes a big difference in performance. It is also tuned and matched to the T4 chassis to make the whole package feel like as much like 2 stroke racing as possible. Our own world-class drivers made sure it was a kart they would want to drive, not just a cheap kart to save money.

Our goal is to make the racing fun and affordable aroun the world, with the best drivers competeing each year in our T4 World Cup. For the last few years, we’ve been running the World Cup in Ireland, where it’s a little easier to handle the Covid restrictions, but eventually we plan to have it move around to different countries. If you want to see how close the racing was at this year’s race in September, you can see it here: T4 World Cup Day 2 - YouTube It’s the full day of racing, but you can jump to the Finals for each class at the following time stamps:

[quote=“TillotsonRacing, post:18, topic:8029”]
the T225 engine class being run in the US are desinged to make karting fun and affordable. As a monobrand, the complete T4 package takes 90% of the kart setup variable out of the equation and really makes the race about the driver. There are a few things you can tinker with (gearing, rear axle length), but . . .
[/quote]> Blockquote

Again, one of Tilly’s biggest hurdles IMHO. If we are doing everything Briggs already does and/or provides, what makes us different? Why should someone switch? The T4 chassis isn’t enough and doesn’t answer the following from a cost v. benefit standpoint:

Is is engine quality? (Engines are built in China like most of the clones)
Is it performance? (They have the edge there, no question)
Is is cost? (A Tilly is almost double the cost of an LO206 and an inferior motor from a perceived quality and tolerances standpoint)

Not trying to be a debbie downer, but these are the questions that both Tilly and the end user need to answer to before they can comfortably meet in the middle.

Perosnally speaking, I was trying to get there and go to Tilly, but at the end of the day, I just couldn’t get there and decided if I wanted more speed, I needed to cross over to the dark side and go 2 stroke.

Having run these a couple times now. They are not double the cost. As add clutch and mount to go. They are more expensive though

A friend is doing a burn down on hours. All he is doing is changing the oil and lapping the valves at a set interval. I think he is already at the 50 hour mark on the hour meter.

The power band is far superior.

I personally got one to throw on a kart and just pound out laps. To extend rebuild intervals on my 2 stroke.