Have to improve on yours here… 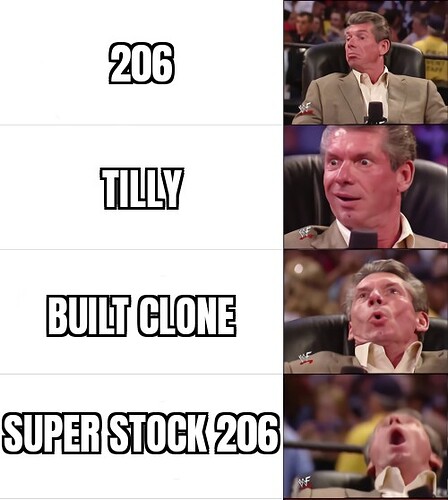 This video did nothing for me either way.

Yeah I’ve found the content on the channel more about getting attention and complaining about things without being part of a solution. It’s their channel to do with as they please and how they see fit, and I get that. But it’s not a channel I follow anymore.

Haha!! I was struggling to find a three frame version to make mine work. Your 4th is excellent

Yes, the AKRA has authorized our 212RS engine to run in the same class as the Briggs L0206 in their series. AKRA’s concern was that racers were not able to get 206 engines and were leaving the sport, so they asked us to put together something that could compete alongside it. This announcement was directed at AKRA races, but since then, we’ve been approached by several other tracks to use the engine in sprint racing. Our engine is not intended to fragment the market–it runs in the same class as the 206, so racers can choose. We worked with the AKRA and RLV to make sure our engine has the same performance characteristics as the 206 so that neither ours nor Briggs has any advantage. It was tested extensively by them and us everyone happy (if that’s possible).

Does Tillotson enforce anything such as for example engines need to be serviced with an interval of xx miles to ensure that the T4 series are fair for the drivers?

I have a couple of friends that participated in an event, but there was clear differences in performance.

engines need to be serviced with an interval of xx miles to ensure that the T4 series are fair for the drivers?

I’m not sure if any engine has this kind of requirement on a fairness basis. Reliability, sure. Fairness, not so much?

James, I believe he is asking about the T4 series in which Tillotson provides/maintains all the karts.

That’s correct Derek.
It concerns the T4 series where you compete for championship points.

Got it. Ok that makes more sense.