I put new tires on the kart on Saturday and by the end of the day, they were pretty much toast. To be fair to the tires, I did about 10 sessions on them of 10-12 laps each.

A) How often do you guys change tires? (For practice? I assume most folks will put new tires on for race weekends.)

B) Would it be a feasible idea to put harder longer lasting compound tires on for practice and switch to the softies for competition? Or would that be so different handling wise that you’d essentially be learning totally different lines etc.

C) it seems that tires make peak grip for a very short period of time (10-20 laps). Is this about right? If so, on a race weekend, what’s a viable tire strategy? Do you put them on for qualifying or do you hold out for the race? 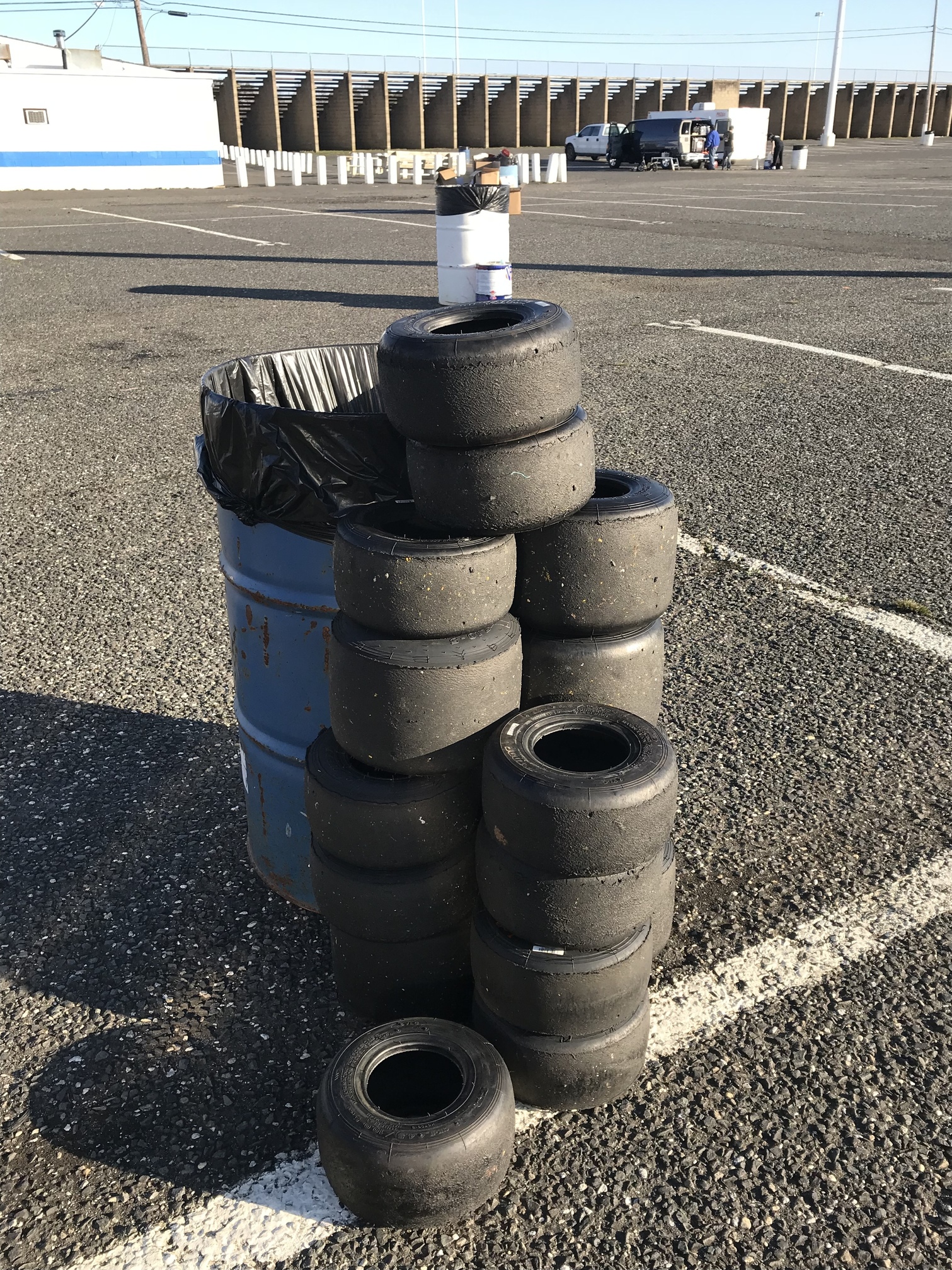 You need to practice with the same tires that you race or lines and kart set up will be different. With that being said what tires are you running? It sounds like it is a tag or shifter softer tire if you wear through them so quickly.

C) If the compound is equivalent to a MG Yellow then yes. All race tracks will typically require you to qualify and race on the same set

Are those your tires? They don’t look too bad…

A. Depends what your budget allows and what event your racing. Most “regional” and “national” series require new tires for the weekend or each race day. Many guys will then take those tires and use them for practice tires for the next event. For club racing, I’ve seen guys put new tires on every weekend and others use 1 or 2 sets over a 15 race schedule.

B. I would run your current tires until you can’t see the wear dimples. Something like a LeCont Red would last longer than Whites though. I think I ran 5 different tire makes/compounds last year because everyone has a different spec tire. It’s ok to run different tires.

C. Yes, new tires make peak grip for a handful of laps and then level off. The norm for most any track/series is you must qualify and race on the same set of tires so there isn’t a really a true tire strategy.

If you flip the tires on the wheels you can get some more life out of them.

Those aren’t my tires. I was just amused at how each trash can in the parking lot had a big stack of tires next to it.

I was not aware that you had to qualify and race on the same tire. Makes sense. It also makes sense that it would mess with setup. And yes, it’s 125cc TAG (lecont whites).

Thanks for the responses. I quess the answer is… practice on what you got, race day means new tires, if budget permits.

I shall try that, thanks!

One more thing… you say the tire levels off after the initial super-grip wears off. If grip over wear time was visualized in a curve, would the grip be steady-ish (mildly deteriorating) until the tire is done or is it a more rapid curve downwards (significantly progressively less grippy)?

The reason I ask is my times got progressively slower as the day evolved. I presume a lot of this is due to ambient temperature falling as the day wears on, but I went from 41.6 after switching tires to 43.something as the day ended.

In my experience, grip “feel” starts high, then drops into a plateau. I would assume there is a point where it drops off again and the tire is officially done, but I have never hit that point and I’ve only ever ran 1 set of tires per season!

Granted these are always hard tire (MG Red, Lecont white) in a LO206. But I will often run my fastest lap in the last practice session or in the final. Point being, I’ve found that working on your driving and setting up the kart are more beneficial than throwing new tires on the kart. If the kart was hooked up and I was driving well, a new set of tires probably would be .5s faster but I don’t have that kind of budget.

Here I am, dragging up another older post, but it’s close to what I’m after.

We run Dunlop DFH (I think - the hard compound) and I’ve only ever used tyres thrown out by racers, or sold off cheaply.

I’m very interested in buying a new set but the cost difference is significant obviously. Does anyone have an idea for how long a new set of tyres will last before they fall off completely? Hours vs laps vs cycles.

For reference I run Pre-Evo Rotax Max. I did have a set of well used Vega Whites on the kart when I bought it. They were grippy right up until I could see the canvas on the fronts.

Hey Liam, really depends on who fast you are.
if you are just driving for fun on a greenish track, you will probably get the advertise CIK “250km” out of them before you notice a big drop off.
If you are competing, we are seeing a 0.2s drop off after about 80 laps, then a rapid drop off after about another 20-30 laps.
Oh’ and they don’t store well.

That’s awesome info. Largely we are just turning laps. I’d like to see my times at Carrs Rd get into the consistent 31’s before trying to race anyone.

I’m definitely keen to try some racing though.

The storage thing is interesting, and might explain why my last couple sets have been really bad even with some wear hole depth left.

Would you think I’d get better value out of a single new set of Vega’s, or Dunlop’s? Or should I just ask again for some second hand tyres?

depends on what you are trying to do. If you want to gauge you progress, it will be hard without new rubber to compare your times.

Very good point. It’d be hard to gauge against a PB that was set on new rubber I didn’t have very often.

So I’m bringing up this topic again because tires are a concern and I don’t want to have to be replacing tires every race to keep up with others.

What does flipping the tires on the rim mean? And does it run on the same or similar pace as a new pair?

Tyres are directional, there’s an arrow on the side wall for direction of rotation. Flipping means basically put lefts on the right and vice versa - you have to physically swap them over on the hubs, though I’ve never done it - Im required to buy a new set every race. Grip wise won’t be as good as a new set but slightly better than trying to do a second race on the same tyres.

There’s also a thing called conditioning new tyres, for example Comet K2H are best run for 2-3 laps only initially, slowly brought up to temperature then allowed to cool completely before going out again. Gives them the best grip for the longest duration.

I flip my tires every day. Karts will wear more on the inside of the tire than the outside. I do it by dismounting the tire and flipping the tire on the rim remounting the tire, then mounting the tire/wheel on the opposite side of the kart so the direction is still correct. We run our track clockwise and counter clockwise so I end up using all 4 edges. The last two sides are typically practice as I throw on new tires after 2-3 days depending on who is there racing if I can get away with 4 races I do.

We switched to MG reds at out track this year. They have an arrow indicating they are directional. However, I posed the question to an MG rep and they said it doesn’t matter you can run them either way. So I rotated tires one week side to side and 1 week rotated on rims.

Thanks for the replies, so just to be sure I understood, you would take off the tire from the left wheel and then put that tire on the right wheel and vice versa? Would you do this for both the front and rear wheels and how much time difference is it approximately to run fresh tires and switched tires after one race?

Depends on the track but it was 1/2 second a lap when I swapped to fresh rubber last weekend. Previous tires had 2 races on them.

Everyone rolled out on fresh rubber or I would have left them on.

So if I race one race day on the tires and then flip them for the next race day, I’d lose like 1/4 to 1/2 of a sec per lap? Quite a significant difference

However, I posed the question to an MG rep and they said it doesn’t matter you can run them either way.