I hope you are doing well, and I am writing here to ask for help regarding the EGT temperature of my TM-M1 engine.

Because of the rules of the championship, the carburettor is the Dellortto VHSB 34 ES - Only needle allowed is the K28, and the emulsifiers allowed are the 267, 268 and 269 only - We are with the 268. We also tried the others and had no success.

Below changes/tries we have done all of them with no success in lowering the Low/Min temp of the EGT.

After all the above, we noted that the maximum temperature always varied but never the minimum temp - Which was very frustrating, and neither TM answered my emails.

Does any of you have other ideas of any other causes that this might be?

By having the minimum temperature so high, we noted excessive engine wear on all components.

Could this be coming from the cylinder? Any other clue?

What gasoline are you using?

We need to make it cooler. At last 50 celsius.

Can I ask how you’ve drawn this conclusion? I see you mentioned wear, can you be more specific on what you’re seeing?

While there are general ranges, target EGTs can range quite a bit depending on many factors and tend to be specific to your own setup and even conditions on the day.

Adding ignition advance can reduce EGTs, not without risk of course.

Could it be a change in driving behavior? More gripped up track?

What does your piston look like when you’ve had the EGT be “too hot”?

The only allowed gas for the national championship is pump gas - Mixed with Xeramic oil.

The piston looks OK such as the spark plug - Although wear is notably higher than normal.

Ignition advance can`t be changed as we have a plate that is obligatory to be used on it; thus, you can’t manipulate it.

Regarding driving behaviour, I tried everything, being more aggressive and less aggressive on the throttle, using more 1/4 or even 1/2 of the throttle and nothing.

The engine behaviour was the same when we were during the racing weekend and even weeks after when we had almost no one on the track and a few rainy days.

I also spoke to other mechanics in the track, and they all had no idea of where this could be coming from.

The only word I can find is… weird…

I figured advance might be restricted. How are you measuring wear exactly? Also do you have a datalog you can share? Speed curve vs EGT.

Reason I’m asking is that it’s not clear if you actually have a problem. If the engine is performing well and as reliably as before, I would not be too concerned about the arbitrary number for min EGT.

I guess you could have a minor air leak somewhere that’s making it run a little leaner on partial throttle application.

Your pump gas is Pemex 92 with 10% ethanol, right? That should be 97-98 RON which is enough for a TM. If you’re using pump gas your best EGT on the bottom end will be higher and your maximum EGT before detonation on the top end will be lower. Do you see detonation damage on the head and piston? Do you have adequate fuel on the top end to leave a fuel deposit on the piston?

I have no problem sharing the data; I don`t have it from this last weekend, but I am almost sure that I have downloaded the data from the racing weekend and can send/share it tonight when I get home.

Regarding the air leak, any ideas of where? And so we can try to check.

Wear is being measured per hour of use - Attaching a photo that my mechanic took of my piston after 6h of use.

In the attached photo, we were jetting 155 on the high jet and 52 on the low jet - Which was the jetting we were using during the race weekend. My teammate was even leaner, 150-50 and temps were in the window we think is adequate, 420-670 C (788-1238 F) - We tried the same jetting, and I ran out of gas several times when exiting the slowest corner of the track. 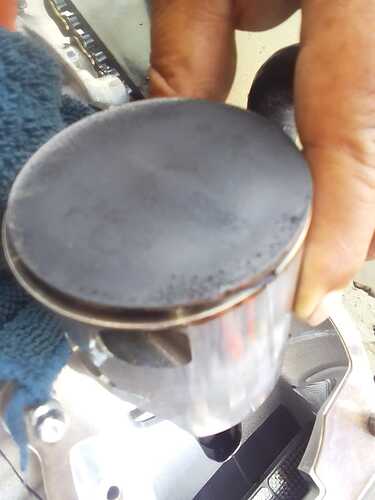 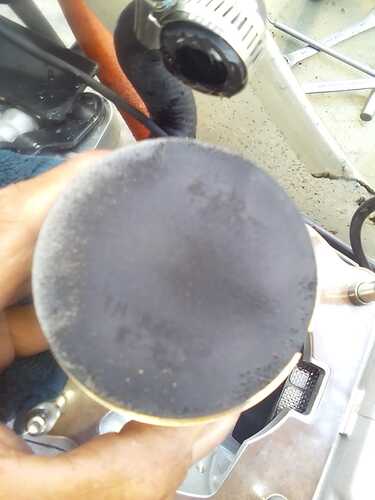 OK yeah you have detonation there for sure.

Oh, yeah, that’s a lot of detonation. I would strongly recommend enriching the mixture just about everywhere. You need a bigger mainjet, a bigger pilot, probably raise the floats at least 2 mm, and maybe check to make sure that your fuel circuit is not losing pressure in corners.

How does your fuel line connect at your carburetor? Can you make a diagram of your fuel routing?

Also, if TM ever needed to advertise, that engine apparently ran fine with a piston like that. TMs are TOUGH engines. My FSAE team once ran a K9B on 87 octane gas mixed with regular 5W30 motor oil with no apparent damage.

Thanks for that @KartingIsLife - We will have that checked and I will come back to you to let you know.

And… @Charles_Kaneb we will enrich that jetting then maybe just like you said, no fuel is being left there as reserve. If we were using 155-52, how high would you go just to start with?

TMs are really tough, but I had a piston with the 175 with 10h of use looking like new - TM is a better engine in general as we all agree. 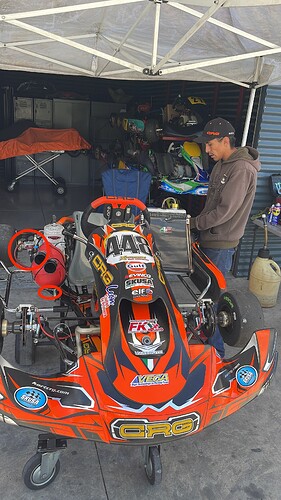 Ok. Do you have one fuel hose leading to the carburetor? If you have two, you have the regulated pressure inlet on the carb, if not, it’s unregulated and you’ll need to plumb the system like this:

That’ll give you about 250mm of pressure head at the carburetor and consistent fuel pressure - if you’re running out of gas right now midcorner you’ll get high EGTs and hideous detonation. The big fuel filter stores gasoline to make sure you always have it available even if the pump isn’t keeping up.

So detonation occurs when there isn’t sufficient fuel? Is this similar to cars needing special oil setup (dry sump?) when exposed to sufficient G loads?

Do you have a better photo of the fuel line routing to and from the fuel pump and carb? Have you cleaned the pump and replaced the gaskets recently?

Have you inspected the reeds to ensure they are not broken, and causing an air leak?

Have you verified that your float height is set correctly?

Is the slide returning to 100% closed when you are off throttle?

Have you lowered the clip position at all (raised needle)?

You could always try a bigger pilot jet (B100), and/or a different slide (lower number).

This was the first weekend that we have the below list of items we replaced - Just used Google Translator from Spanish to English on some of the components:

See below how we have it set up, just like TM indicated to. 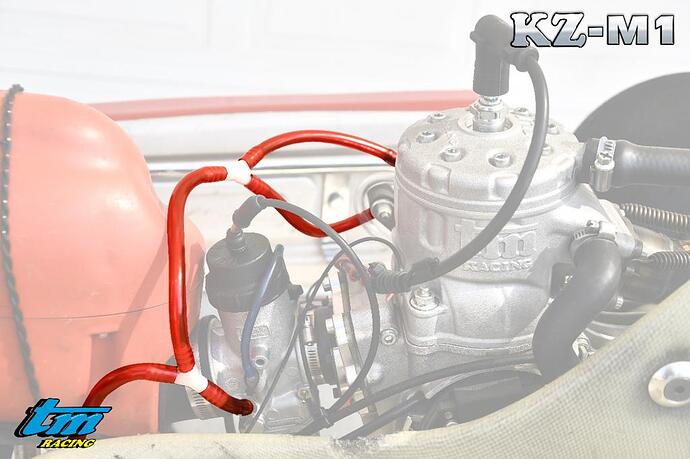 You may also check that the idle air screw is set correctly on the carb. Turning the screw in leans the mixture, though a very small change, and you’ll need to go in at least 1/4 increments. 1 1/2 turns out from closed is probably a decent starting point.

Yep. That looks like you’ve got 50mm of pressure head and no storage volume after the pump. In the line running above the carburetor before the wye install a big fuel filter as a first step.

Maybe install this ahead of the carburetor fuel inlet: 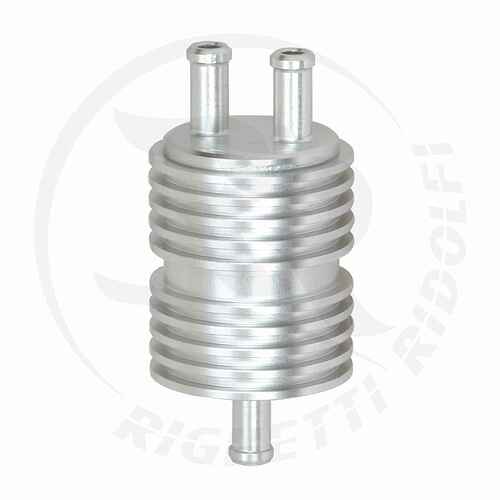 Tie it in with this on the return line to the tank. 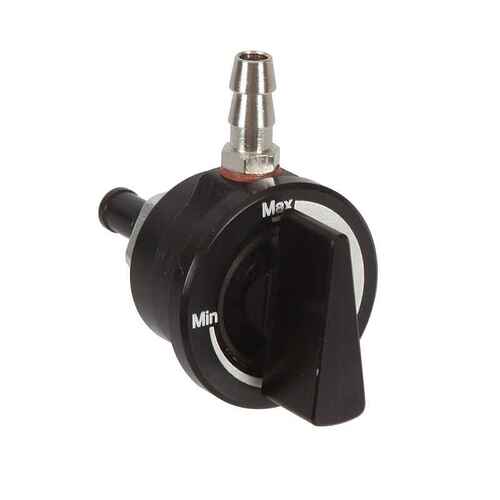 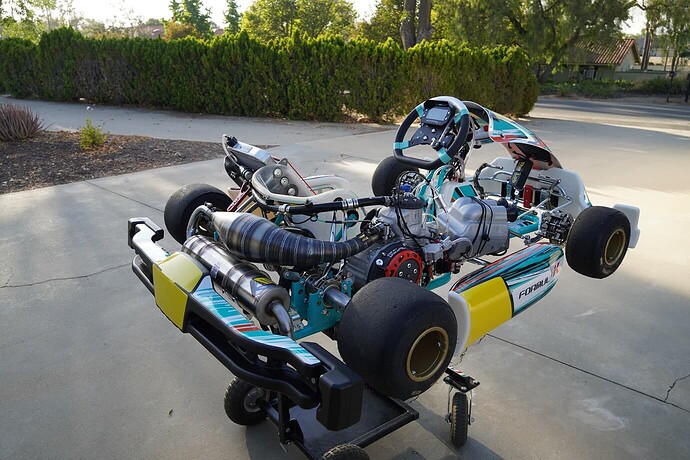 Are you allowed the change the squish? If you open up the squish and reduce compression a bit you might need able to get rid of the detonation. Basically it might have too much compression for the lower octane fuel you’re using. Regarding the time is another answer, but sounds like you can’t adjust that.