Typical Air Density Changes and it's Effect on Performance

Hmmm…I don’t know, never had experience with old/new tyres (at least never knew were they new or old) but in terms of overinflating, it sounds logical so it probably affects the grip levels. Also, the air more dense during the day so engine is struggling more then during the night.

@alvinnunley That completely opposes what I experienced so far. It could be that the new tyres work better during the day and that I got rubish ones yesterday. It could (most likely) also be that the race karts are affected by tyre wear differently as they are much lighter in comparing to rentals so they handle higher temperatures much better. I actually always thought that higher the t° = more grip, before I found out when the best laps are set.

They are set at about 8-11PM every day, so I think in my case, tyres work better at night. Maybe I can figure something that will change my opinion, might be.

“Dense air” there’s a thing called an “Air Density Gauge”, it measures the barometric pressure as affected by the air temperature. Low air density means “lower performance”, high era density “higher performance” now it doesn’t always work out that high air density occurs during the evening, or that low air density occurs during the day, but air density tends to follow that pattern. I could give you the formula for calculating air density, (it’s a tedious task) but I don’t think you’d be interested in that. Instead of guessing, you could buy an air density gauge from Longacre, they sell a pretty good one. It also has instructions on how to use it. Very simple. When the air density is low, engines tend to run rich (less performance) and when air density is high, they tend to run lean (less performance). People racing their own 4 cycles can change the jetting to match the air density. I doubt, in your racing efforts, that option is available. Anyway, the formula gives you a number based on the ambient barometric pressure and temperature. In general, and I repeat, in general, because you can’t re-jet the carb, higher air density is faster than low air density. I think if you saw my charts, you would be quite surprised at how much, and how often, the air density changes. I have about 3 years of charts. Retired, and living alone, I have extra time.

@Stacker . What’s the nighttime temp generally. If it’ was 35c day, what’s night temp? This would explain the faster laps if the tarmac is still warm-ish.

Are you being serious? It doesn’t sound like it!

Edit: Ah I see your edit.

You’d think rich would refer to “a wealth of oxygen”

Here’s the air density chart for January 2019. The scale on the left is percentage of air density, across the bottom is the date the reading was taken. 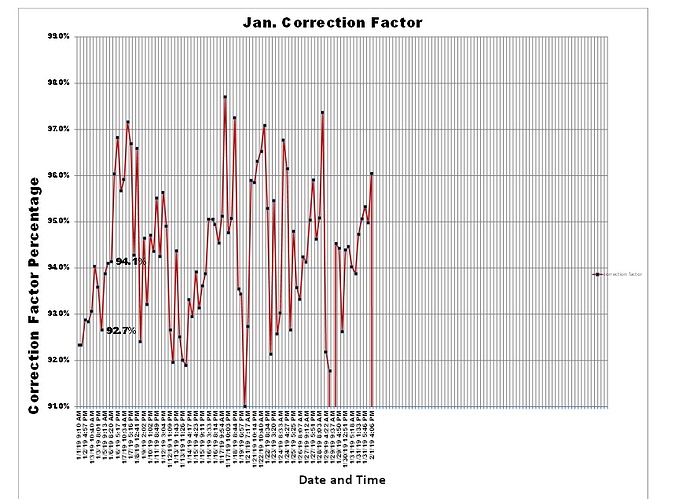 The more dense the air the more oxygen that air holds per cubic inch. Meaning that the combustion in the combustion chamber has more energy. 100% how and why forced induction works.

Caveat being that you have the appropriate amount of fuel in the cylinder too of course to maintain the same specific output.

Wait. Lean means what exactly.Less air or more fuel? If I twiddle my jets to make it leaner… what am I adding (or taking away)? Air presumably since its a carb?

I know this is basic, I just drive the things mainly.

Lean(er) means you have more air in a given charge than before. It’s a relative term of course. It can be more air or less fuel, it’s more a description of state rather than how it got there.

As far as screws, it depends. Typically the screws (essentially taps) on a TaG control the fuel. Screw in, less fuel. Screw out, more fuel.

However the idle circuit on some carbs controls the air allowed into the idle circuit. Most slide carbs operate like this. Warlbro on a 206, Dellortos on KZ, RoK and Rotax.

When you lean down your carb, you are taking away fuel and increasing air.

Sure you’re displacing some air with the added fuel, but I’m not sure if it’s as significant.

Wait. Lean means what exactly.Less air or more fuel? If I twiddle my jets to make it leaner… what am I adding (or taking away)? Air presumably since its a carb?

I know this is basic, I just drive the things mainly.

The ideal ratio, when all the fuel is consumed, for gasoline, is about 14 parts air to 1 part fuel. Stoichiometric is what it’s called. A lean condition occurs (in an engines combustion chamber) when the ratio increases. I.e. more air and/or less fuel. A rich condition occurs when that ratio decreases. I.e. more fuel and/or less air There are other factors that come into play, but these 2 are the basics.
Remember this; there is no suck, there is no pull, everything gets pushed into the cylinder by the outside air pressure. It’s called a pressure differential. Trust me, knowing that makes a difference.

When you lean down your carb, you are taking away fuel and increasing air.

When you are turning the needles in, you are restricting the amount of fuel flow, (called leaning down the mixture) but the airflow stays the same, less fuel, no change in air, leaner.

With reference to a fixed jetting carbureted kart motor, the % fuel in the fuel-air-oil mix is taken independently relative to the volume of oil, & then air. Essentially, in a fuel-oil-air mix, the fuel & oil take up a certain % of the volume, & the air fills the remainder. But since air density is independent of volume, the % concentration of O2 in the mix can vary for a given volume of air.

An increase in air density means more O2 is going into the mix, which brings about a lean fuel condition. Vice versa with decreasing air density, where the fuel-air ratio would become rich.

Just to complicate things a bit more, the same effect is in play WRT altering the % volume of premix oil in the fuel. Increasing the mixed in oil volume will lean out the fuel-oil ratio, & vice versa if less is mixed in.

So, it’s best to think of fuel-air & fuel-oil as a balancing act. If you change your fuel-oil ratio, then that’ll alter the fuel per unit volume being delivered by the carburetor. Then you have air density, which is the final effector, & what you ultimately reference against your jetting adjustments. So, for example, if you were to change your oil mix ratio, all your jet settings would have to be adjusted accordingly for the same air density values of the former fuel-oil ratio.

Thank you both as well! Much clearer now.

Humidity is a factor too. More H2O in the air requires a leaner mixture.

Thanks. That makes sense.