What camera should I get

I currently race world formula (4 stroke) and id love to get a camera but im not sure which camera to get. Ive heard that with 4 strokes the footage can be shaky so what cameras would be best for that? Price range wise i think around $100-$250.

But, get one of these too or something like it as the audio on the 7 is total fail due to mic placement.

Here’s why: https://youtu.be/pXFWB7sMddQ
And, I made it less “bad” in post, believe it or not.

But, James is correct: the 7 is unrivaled in stability. I have owned 4-7 and I agree with James.

I recently snagged a gopro hero 7 black , brand new for 275 on the O bookface market place.

The camera I recently bought is Eken H9R. It is quite under your budget and I can´t really say anything about GoPros as I never used one. This one is good for what I need it. It gets my driving filmed at 1080p 60fps (Also has 4k 30fps and some 2.7k option). It is is a bit shaky, it is not the best mic but it is about 70$ on amazon. I am not sure if you would like it, as you can get a GoPro 5/6/7 for like 150-300$ that offers much better, literally everything. In case you want to start off with something that will work and that will be much cheaper you can give cameras in this price range a shot.

As a rental driver, I can confirm that 4 strokes are a bit chunky and shaky but I don´t see a problem or a need to buy GoPro Hero 7 Black just for the sake of stabilization. Of course, it is a better cam and everything but if you want it only because it stabilizes the video, I would not recommend you to do so.

All up to you. If you want a good video (potentially good youtube quality like 4k or 2.7k at solid fps), stabilized very nicely and bunch of modes, I would recommend GoPro 6/7. If you just want to tape your drive and see what and how you do, to analyze a bit, I would recommend you some cheaper cam as it does the job just as good as the 200$ one. As you can choose both, think about it.

I would say it depends on what level you race. I mean rentals can not be professional but it can be either just for fun or something more serious that tends to be professional. Depending on this, think about what kind of footage you need and do you want it to be very high quality that will let you analyze everything in slow motion options, that kind of stuff.

I hope I helped in some way.

That was very helpful, thanks. I do mostly sprint races and road races right now so I do have some bumpy tracks. Do you have any footage that I could see with the Eken H9R? Also would any of you recommend the hero 7 white or the hero 4? both ive found for under $150 which is great. would I still get very shaky footage if i mounted it way up on the fender right infront of the steering wheel? unfortunately helmet mounts are banned.

Hero 7 will have super aggressive shake reduction and works well on faring.

Check my youtube channel “Pavle Smiljanic” I have a few videos that are filmed using Eken. Just ignore the first video, it had problem with mount as it was my first time using it. Now that you mentioned that helmet mounts are banned, I think it can get pretty nasty with the weaker stabilization as cam will be on the kart, so I think some GoPros will do a better job. Check some footage during the day and you will see how good/bad it is. 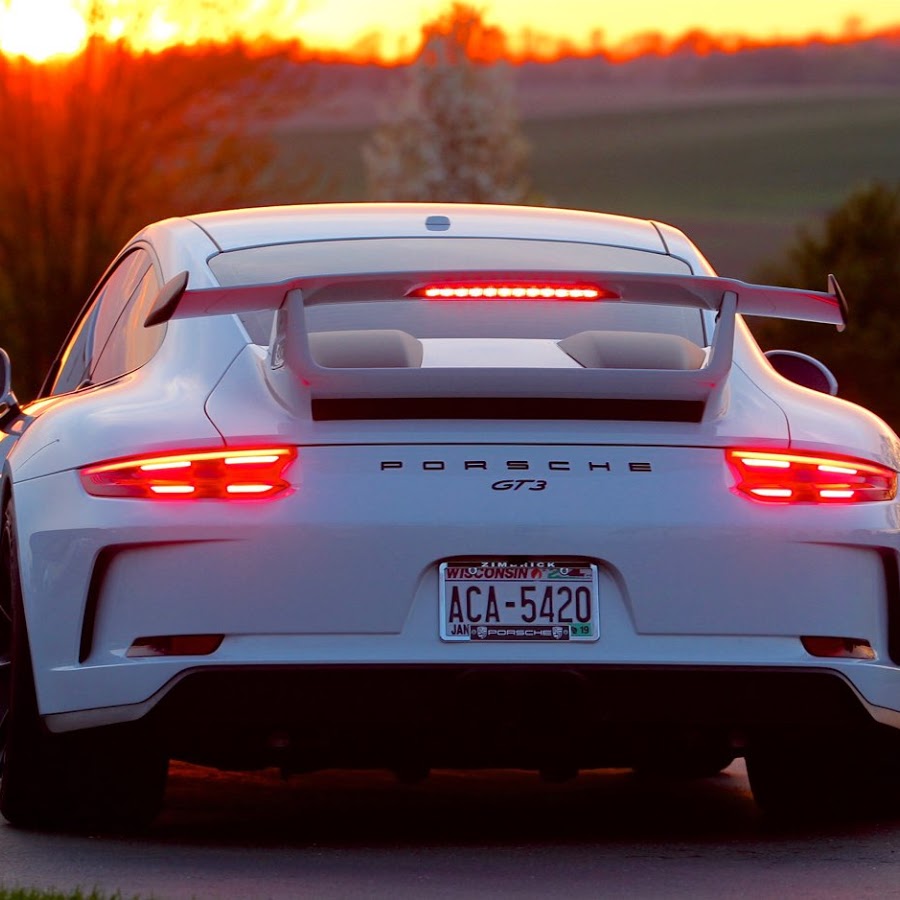 
Quite a few videos from different angles on my youtube. Road race and sprint from the GoPro 7. Has worked fantastic so far. Only problem I have been having is the cracking of the lens covers, but have found a protector to help solve this problem.
1 Like
Bimodal_Rocket (Dom Callan) September 19, 2019, 2:24pm #10

So stable on the road courses. They really nailed the stabilization. Too bad the audio was a problem in general with the 7. I am guessing the imminent 8 will be better audio.

I believe the DJI Osmo Action cam has pretty good stabilization and was made as a direct competitor to the GoPro 7 Black but costs less.

Most action cams have sub-par microphones, especially when it comes to racing and wind noise. IIRC, they all have auxiliary mic inputs if that is a major concern.

Is that the hero 7 or hero 7 white? The white is much cheaper. im hesitant on the hero 7 simply because of cost, I just need good enough footage to analyze without the agonizing shake of a 4 stroke onboard video. It doesnt need to be as perfect as the hero 7.

audio isnt a major concern, I just want the footage.

Im gonna re describe that as vibration

If you can find my Go Pro 5 in the weeds at Mid Ohio you can have it.

hero 7 white vs black: For your purposes the white is fine. No 4K. No facial recognition.(Huh?).
You also don’t get 240fps or whatever for super slow mo (never used it). 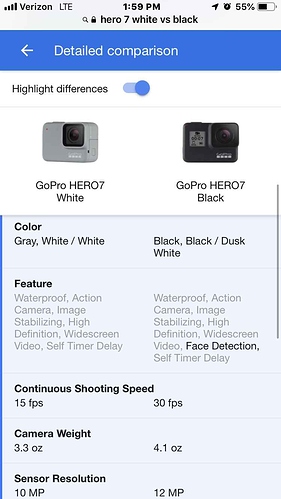 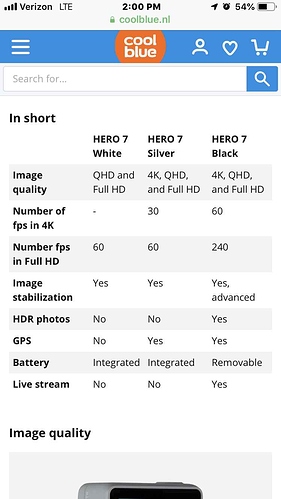 One BIG thing to consider…

The hero 7 white has an Integrated battery. That is not ideal. It will not last more than 3-4 sessions on track. I typically put a fresh battery in after prefinal as it’s usually more than half done.

So, make sure to keep it on charger between sessions.

Also, they say the 7 black has “advanced” stabilization which means the white is probably like the 6 which is actually more than good enough. Arguably, the 7 black is too stable.

This is super helpful, thanks. It says the white doesnt have gps, do you find telemetry to be important? I have a mychron 5 already. Ill be able to charge it without a problem but thanks for letting me know. I’ve found some for under $150 which is nice. Im gonna check out some hero5 footage but I dont have high hopes for it on a 4stroke so Im probably gonna go with the hero7 white. Im definitely going to get a gopro.

I appreciate it. Ill keep an eye out for it

, do you find telemetry to be important? I have a mychron 5 already.

It’s neat to have but the mychron data can be imported into racerender which is even better.