What camera should I get

The hero 5 black is very good. The vibration reduction started to get good with the 5.

Do you have any vidoes with the 5? I think I might as well get the 7 white if im going to the higher price range instead of the hero 6 black. but if the hero 5 has decent stabilization than I think it would be best to get that.

I am honestly not sure which of my older vids are on the 5. And, I’ve never used the 7 white.
They are probably pretty comparable but the new one is probably the better bet. They would both be more than fine.

Thanks for your help! Ill be going with one of the two. Just depends on price.

You are welcome. Can’t go wrong, either way.

Here’s some hero5 I think:

If you are able to compare audio on 7 white to 5 black, I suspect the 5 will have much less wind noise. Refurbished 5 black is 110 on eBay it seems.

Also, the non-Gopro batteries are pretty crap. Gopro regularly messes with their software to make life hard for the knockoff guys. If you get a 5 and buy spares, pay the extra for the Gopro branded batteries. Also, if you film in HD, get fast SD card.

(Slightly)Crank down the Gopro mount with a Phillips head before heading out on track so the vibrations don’t change the camera angle mid session.

Very helpful again. What’s the difference with a session? I unfortunately can’t mount the camera on my helmet so it think top of front fairing is the best option. So far 5 seems perfect because of the price

The sessions are the teeny ones. Not ideal as a main camera in that I don’t think they have shake reduction.

I could be wrong, but, I think the hero5 sessions might have shake reduction. I have 2x hero4 sessions and they definitely don’t have it.

You are indeed correct: 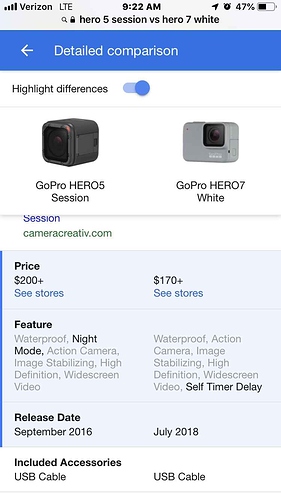 Given a choice, I’d prefer to use a non-session as main camera. I think the sessions are ideal for back camera or when you need something small and light.

Oh hey @Bobby; since you have two sessions, lemme introduce you to racerender…

It allows you to put multiple camera angles in your videos. This is fun to have in races where you can watch your heroic passes and see your opponents fade into the distance. Hugely gratifying when it goes your way.

I’d love to get a 7 but after needing a new axle and rim the 5 is the only thing in my budget now. I think that’s what I’m getting. Ideas for mounts on a four stroke?

Sorta depends on what your series lets you do. I personally like front faring. A lot of folks put a mount on radiator. With a 4-stroke, no radiator so some other part of the chassis. Some have used a ball joint bracket.

Try to jury rig a zip tie system of some sort so that when your camera inevitably detaches itself, you don’t lose it. Only happened to me once, but it happens.

Im pretty sure I can do anything on the kart. I could have a bracket off the side of the seat (similar place to radiator). Will videos on the fairing vibrate? I think for having one camera those are my two main options.

Yes they vibrate. However, I’m pretty comfortable with 5 onwards fairing mounted. The stabilization is effective.

You will not see the tearing Matt is displaying, in my experience.

Yeah, sorry, this was on a Contour HD camera - no stabilization.

has anyone ever tried rubber mounts? kinda like what the seat is mounted to.

I think those might be for a drone? I don’t think you will need rubber mounts. Try it without first and then maybe try things if needed.

Slap a sticky mount on the faring and let er rip.

sounds good. plus a sketchy zip tie safety mount. you might’ve ended up saving me a camera because I didnt think of that! thanks again

Yw. The cameras are surprisingly well made. My hero 5 went flying at 55mph, bounced three times on track, slammed into huggy barrier and kept filming the grass all day.