What transponder to buy?

I’ve actually never bought a transponder, only rented them. What transponder should I buy? Is there a difference? Thanks

I really like the mylaps transponder with direct power. Fit n forget. 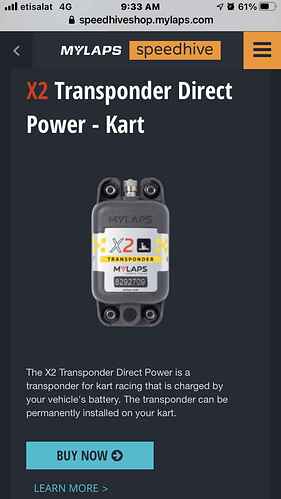 If you are allowed in your series, and can get hold of one, I’d suggest the older AMB TranX 160 series since they don’t require a subscription like a lot of the later ones do.

I use an older non subscription model sold by a guy in England on Ebay that are modified to run off a 9v battery. Works great.

Mylaps has a new non subscription based transponder, though on the pricey side at $400.

Great topic. I just ordered a Mylaps transponder and now I wish I didn’t- as I didn’t realize there were other options out there (non-subscription).

what options are non subscription? how much do they cost?

I still use my original yellow brick Tranx160 from when I started 20 years ago. Tabs are broken off, so it gets zip-tied to my sidepod but it holds a charge like new and I’ve never had a single issue with it not picking up.

Isn’t there usually someone who is selling used transponders posting on here? I can’t remember who it is.

Check ebay, yesterday there was one up there for $260 or so.

why so insanely expensive?? whats so special about transponders?

Because it’s a necessity I assume. Plus, like I said, mine has lasted 20 years so if you spread out 300 bucks over 20 years, it’s pretty cheap.

Maybe you could arduino one up!

Required for timing and scoring.

I’m sure any patents have expired, create your own and sell them.

I think it’s easy to assume that, and scoring systems are not an insignificant cost to clubs and racers…

AMB\MyLaps is by no means the only supplier or technology on the market. There are other choices for tracks\series\clubs, including RFID based systems like Motosponder

It’s pretty specialized, developed from custom hardware that demands high reliability (See TJ’s post on 20 years) and demands a high level of support. I spent some time consulting in the early 2000’s on TX160 and TX120 systems, it’s not as easy to do as people might think… even with modern tech.

I agree. Was just being a bit silly. I certainly would want a reliable transponder that the race director would accept.

Anyone know where the best places are to mount them? I’ve heard front bumper, seat, and side pod? I’m wondering if the Lo206 class has some sort of requirement I’m not aware of?

Your local race org will have a rule about where it has to be mounted. Most require it to be either a set distance from the front kingpin, which usually means it gets mounted on the sidepod, or another common placement is on the back of the seat.