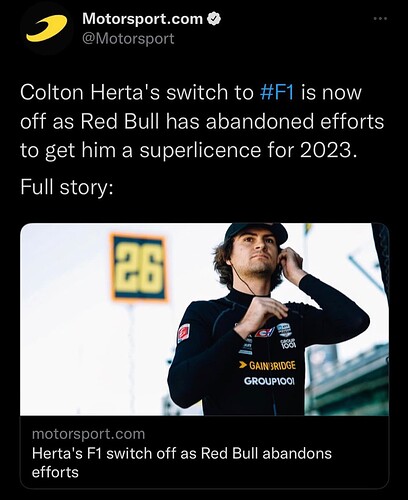 Well I think the FIA made the right decision in not giving Herta special dispensation. The rules need to be followed (pity they weren’t at the last race in 2021). However I think the rule is rubbish discounting some very good drivers from Indycar. Off subject but I think F1 is getting too big for it’s boots. When you have other teams (Andretti) wanting to join F1 being snubbed I think that they have lost the plot.

Controversially, I’m not entirely convinced by Herta. I mean Ericcsson had a good shot at F1 and he’s whipped him this year.

I’d rather see Scott Mclaughlin get a shot but he’s a bit old and not American so no ones interested lol.

Colton had an awful year this year because Andretti was literally like the 5th best team this year. Ganassi was obviously very strong. Herta’s strengths showed more in previous years. 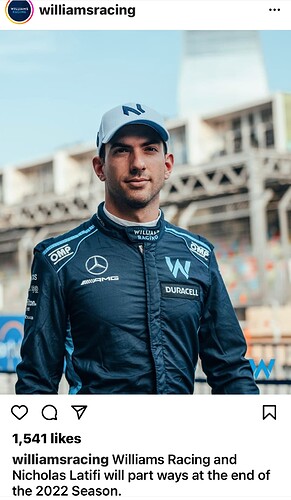 Although the car itself was a looker, its performance was sub par. Both drivers struggled with it all season.

It was time. Williams is spoiled for options right now too.

I’m hoping for Sargeant with De Vries going to Alpha Tauri and Gasly to Alpine.

Somebody on the crew is having a bad night.

Yeah what a crazy deal, especially since he aborted the lap before.

They probably had planned to fuel for one lap, but then they asked him to abort the first attempt which appeared to be all purple at that point… then they realized by the end of the lap they were going to be out of fuel, but they had to go for it.

Bit of a silly miscalculation there.

Delay was too cautious, we could be racing right now…

May as well just get rid of the full wets, we never use them anymore anyway. 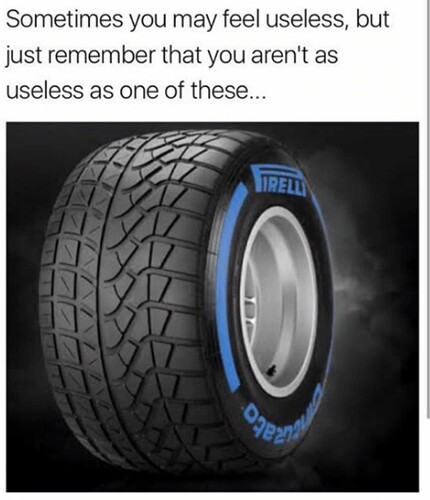 Can Haas please just put steel end plates on KMag’s car? That’s the third time this season his endplate gets knocked 5 degrees out of wack and is black flagged…

What a shame it’s happened to him multiple times when he is up near the front. Maybe just back it down a bit and survive the first lap?

And quite a few unforced errors today from Hamilton and Verstappen.

Super tricky conditions, wasn’t surprised to see a handful of errors from all drivers. Except Perez, he drove almost faultlessly and absorbed so much pressure from Charles. And you could see Charles pushing, locking up, overshooting apexes.

I don’t think you can calm down Magnussen on that opening lap. Half the time he makes up 5 spots, half the time he knocks that wing askew. His style is just aggressive. And at Singapore you can make or break your race on the first lap. I just don’t think that level of damage is black flag worthy… as he said there are tethers in the wing so it won’t fall off.

Common theme with Russel. Ran over Bottas last year destroying both of their cars and blamed him.