Correct, it’s for reducing vibrations, you can actually see it visually when you warm up on the stand. Not sure how many springs actually break without it, but it costs about $0.50 son I run it…won’t hurt

Cooling system - Disclaimer: I import these, so you can say I’m partial.

Radiator is a KE Technology KL290, double pass. KE is the official supplier of Birel-ART and OK1 in Europe and many race teams, soon expanding to another big name as OEM manufacturer (announcement coming out soon). It’s a top notch product, handmade in Italy at a competitive price.

This particular radiator is a KL290 (I live in California, so I went with biggest for the summer months), double pass technology so you can see both inlet and outlet are located on the bottom. 10mm thinner than standard, 30% lighter, 8% more cooling capacity than standard race version. There is also a standard race version and an entry level. Pump is a P400 model, high-capacity CNC machined. Differently than other pumps, this one has a screw-type cover, where the entire cover rotates to seal against an o-ring.
I like toothed belts (personal preference), one suggestion is to use kevlar belts (cheap, you can buy them from McMaster). I always tape a spare on the axle…and never use it 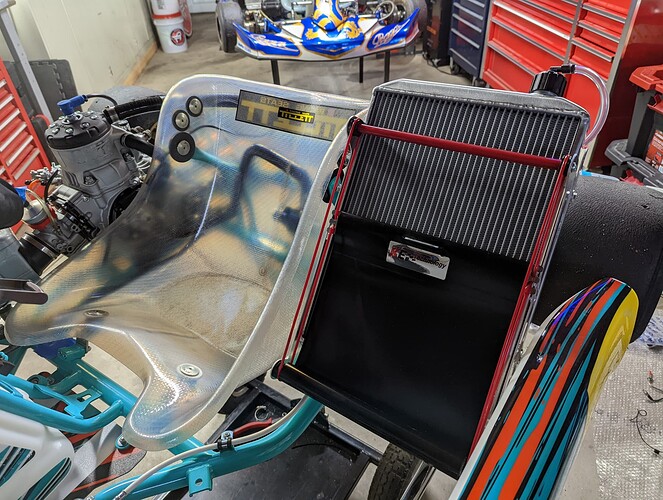 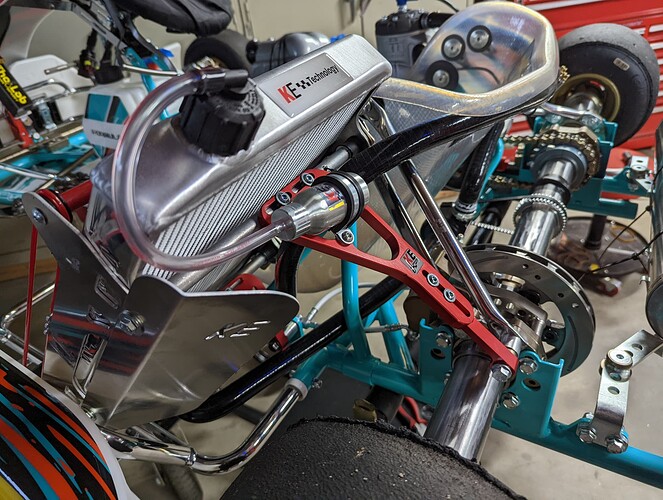 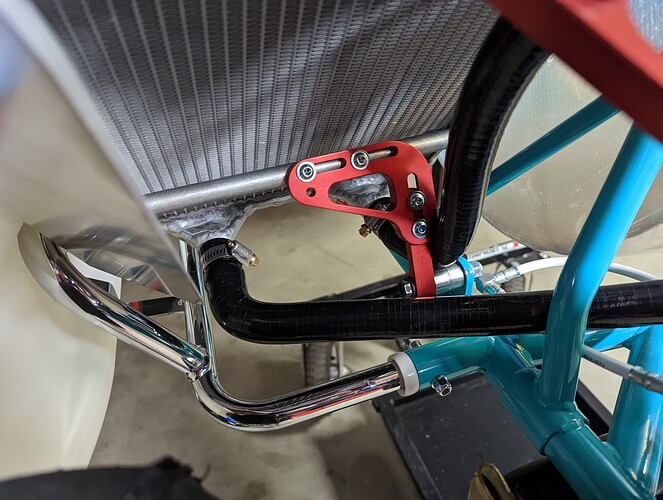 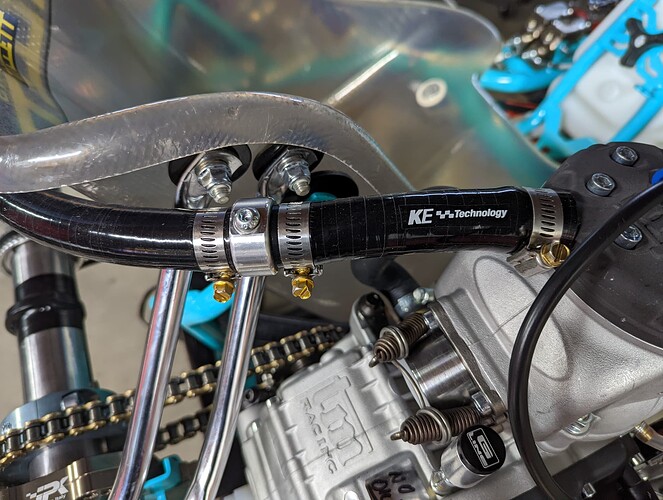 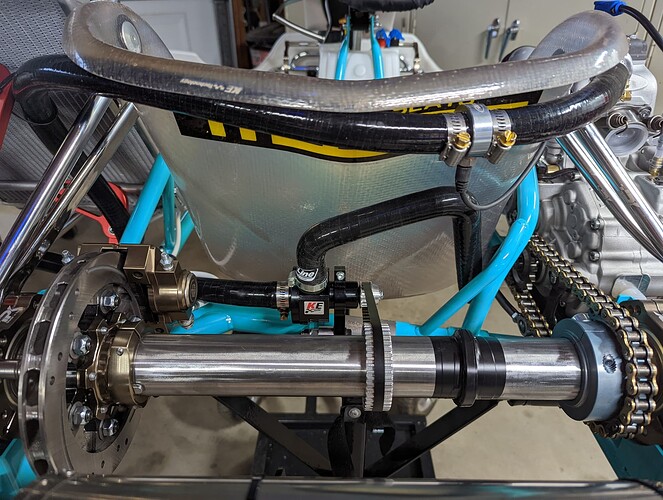 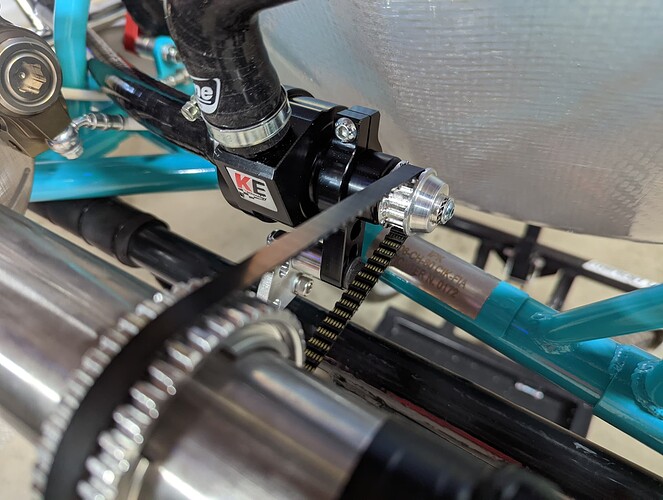 Last posts here to show why I went with custom rod vs aluminum bar…since I moved the seat to the right and used the standard TM J-Arm, I had to find my way around the seat, motor mount and chain. The rod is much smaller in diameter and you can bend it as needed without fear of breakage. Worked perfectly 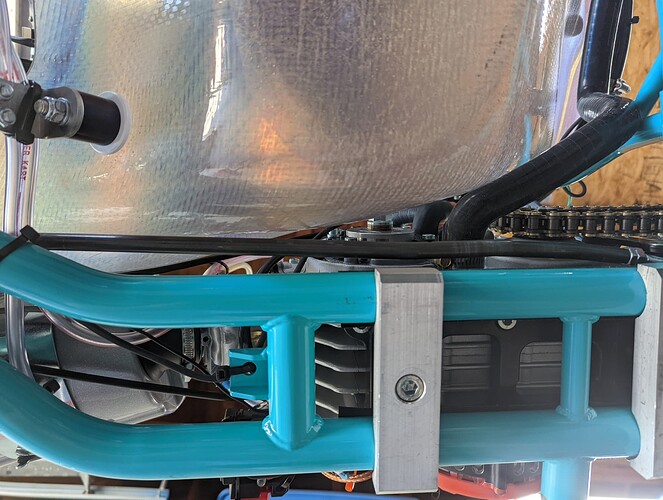 The pluses: took it to a small track for a shakedown with standard settings as far as height, camber,caster,toe. I found it to be incredibly easy to drive, very neutral (not too grippy, not too loose). It flexes for sure more than my prior factory so it’s less stable on high speed corners, but it’s much easier to drive at the limit and doesn’t require super precision on low corners, it just simply doesn’t hop. Very forgiving. Brakes are a step above everything I tried (CRG steel & duralcan, K-Kart, Italfreno). I had medium compound (black) when most use red (medium-soft) but even then…very linear and a lot of bite 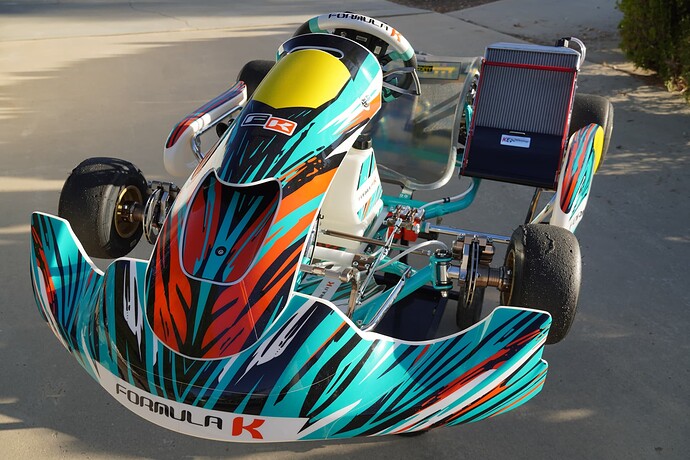 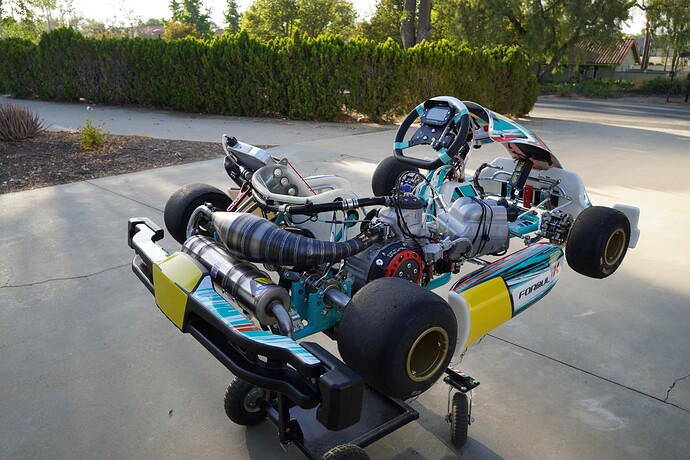 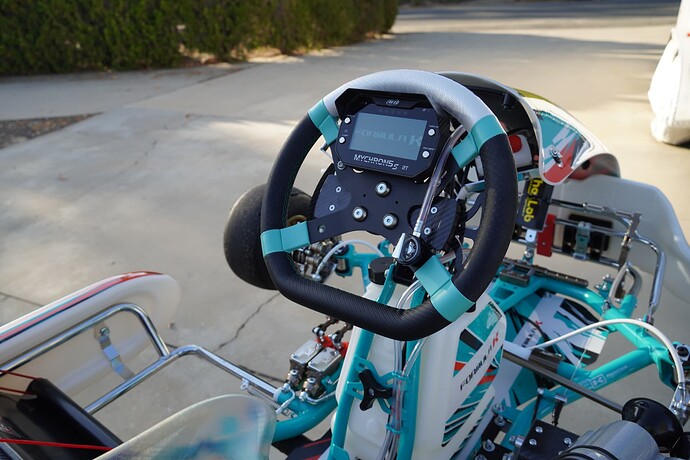 That is a pretty kart.

The (minor) minuses: I didn’t realize ho low to the ground the chassis is, in standard configuration compared to CRG (higher) and Factory (much higher). It felt like it flexed more (it’s a mixed 30/32 vs 32mm I was using before) but yet not a scratch on the powder coating. Track was quite bumpy with a couple of jumps where you take off on all 4 wheels, so probably that didn’t help.
The only parts that took a toll where engine mounts and seat, as at the last second I decided to run it 5mm below the bottom instead of 3mm planned. Next seat I’ll run parallel to the bottom and hopefully fix the issue 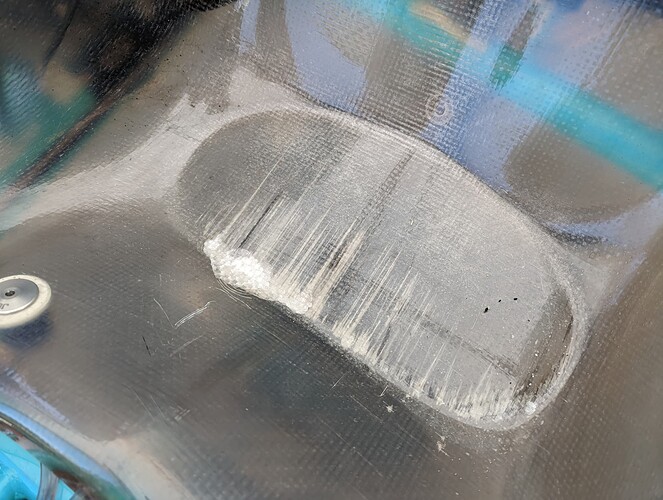 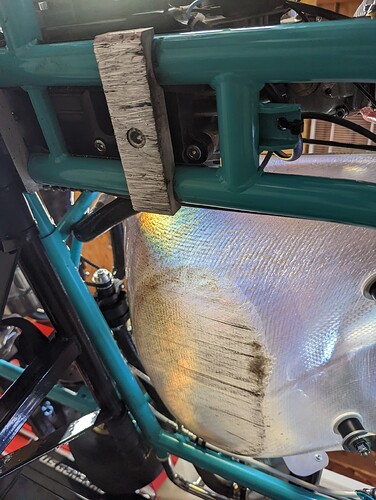 These were the only two points. Frame protectors had some scraping but not horrible. Probably 30 laps or so in total, so a bit too much beating

You have built a very nice looking kart

Could you tell me as Im not familiar with dellorto setups in kz engines - What is the purpose of the fuel tap in the steering wheel ?

What is the purpose of the fuel tap in the steering wheel ?

Me too on this one. Never seen that before. Appears to be a fuel tank return shutoff valve. What purpose?

It’s on the return line. By turning it few clicks, you partially close the return line, force feeding extra fuel back into the fuel bowl.of.the carb. This allows you to correct an overly lean jetting and stay safe, saving the day. It’s a patch though, I can see the egt numbers coming down and you can feel it runs richer but the engine doesn’t run all that well, especially in mid-low range.
So I’m not sure how many times you actually get to use it, but I had one laying around so why not. Some use it, some don’t…same thing with the small reservoir on top, not everybody is using it, but again it’s inexpensive so cheap insurance, just in case

Smart idea. Where can that valve be sourced?

d one laying around so why not. Some use it, some don’t…same thing with the small reservoir on top, not everybody is using it, but again it’s inexpensive so cheap insurance, just in case

I bought tap and reservoir in Italy during my last trip (galiffa), but acceleration has it too here in US

Thank you for the insight Andy

yes, keep in mind it’s emergency only and you should only go few clicks (I tried max 3 so maybe a 20% restriction, my guess), the carb is not supposed to work that way so you are forcing things…past that it starts flooding badly on throttle opening…it will save your day but not improve performance at all, it’s a quick patch that I think helps those who like to run super lean and throughout the race they realize they are in trouble or they may want to give it a click for peace of mind. Hope it helps!

I wonder, might it be possible to jet in the “middle ground” & use the dial to give you a small workable range?

It would be interesting to test, although I’m a little skeptical as this is a crude way to adjust it…you would have to intentionally set it extra lean and then restrict one or two clicks to compensate and see how it compares to a well jetted carb that is working as designed. Interesting for sure!

Yes, agree. Definitely would go conservative on the lean jetting, but if the dial allows for a workable, usable range, it would be an improvement over dedicated static settings.

What I’ve observed from few tests (gradually close and see what happens, run it half close for few laps, fully close it and see what happens) is that the max circuit seems to be working OK. Meaning, closing the tap makes it richer but jet/tube/needle work pretty much as intended. However, the low circuit (idle jet/emulsioner) seem to work progressively worse: engine would progressively lose ability to pick up revs, to the point that after the main straight, it would bog down really badly coming off the first turn. You can notice from 4th click onwards, past half turn on the tap it was pretty much hopeless.

On the other hand, it helped me with jetting…first time I tried this particular engine, I thought I set it on the rich side for break-in but I was still lean. I had my suspicion during first couple of laps, so I closed the tap a couple of clicks on the main straight and the engine started pulling much stronger…instant feedback

I had one of the valves on my old kart with my Rok shifter. One other use is if your fuel pump gets weak mid race you can close it to keep the carb fed. I had this happen on my Rok prior to installing the valve and had to pinch my return line whenever I could to keep it from running out of fuel.