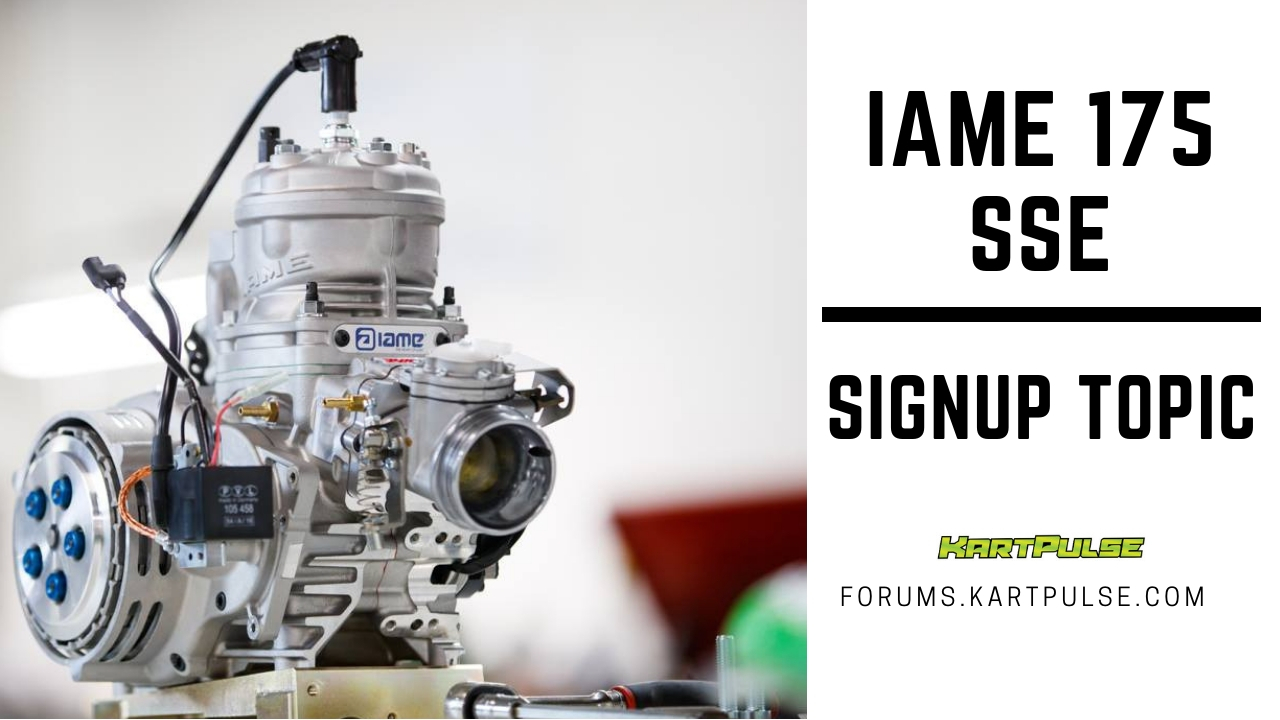 Trying to gauge who has or plans to buy into the 175cc SSE format. I did and will run masters in the skusa great lakes sprint series with some practice appearances at CES road races.

Heard no shortage of naysayers up to this point but i think the reduced maintenance/longer intervals over a kz will pan out. The engine has some cool features to help this like a lengthened exhaust runner to shift the powerband down and a minimum squish of about 0.040 to keep pressures down. I bought mine from John at SRS Engines out of Texas. He’s one of the guys already testing the engine and he spent about an hour on the phone with me talking through all the details. Great guy!

I’m on board purely from a maintenance cost perspective. (Not to mention its faster than a kz) Published maintenance intervals are 8 hrs on piston and about 20 on the bottom end. Part pricing is published as well. From that info i made a comparison point with my kz which is approaching $200 an hour to run (averaged over a 30 hour interval). This engine hits at around $50 an hour. At that rate it pays entirely for itself after 30 hours of runtime! My kz is old, it was time to reinvest, and the timing was right for me to switch. Noone really knows if those maintenance intervals will in fact play out, but even if its double that, im still only spending half of what i was, so for me, its worth the risk. All i know is im sick of being hesitant to put time on my kz because maintenance costs are through the roof. Thats the price of a high strung blueprinted engine. This engine is an entirely different philosophy that seeks to replace high revs and compression with displacement, which means the whole thing isn’t working as hard. Of course that only works if the organizers can manage to keep the racers from blueprinting the engines, hence the claim rule.

I think some of the haters are people with recent investments into a stock honda or 125 kz programs, which i certainly understand. Ill continue to run kz in road races to get wheel to wheel action but that will be the only time that motor turns.

PS. I have a stock honda for sale

I haven’t seen support for it in the PNW region, but SKUSA doesn’t play up here, so I’m guessing it won’t. Shifters up here are all about KZ & SM.

Musgrave Racing here In So Cal is all over the SSE. Looks promising. I’m not a shifter guy and don’t plan on it.

Yeah, it’s hard to say if SSE will grow up in the PNW, since there isn’t a series that supports it, or a contingency program/money class to motivate people to buy one.

It will see support in the PNW in the form of (what will likely be) an open shifter class. Details should be released soon by IKF.

I’m not aware of a shop in the region that supports it. Maybe Tri cities area will have something, but I can’t see it happening on the west side. PGP would be a great track to run it on, but 2 strokes are barred by King Co. govt. Mt High (Spanaway) is practically too small for it, though I guess it can be done.

IM-USA/SIMA is the de facto KZ hub in the region, & they aren’t going to be hosting it.

But Can-AM could have a class for it. So that might happen. Also the O2S Series might run it too.

What businesse(es) will be supporting it?

The 2 WA dealers don’t show anything on their respective pages ATM.

Still disappointing they didn’t include a starter option. The KZ ES really shines IMO for that feature.

Maybe theyre too busy playing w karts to update their website? Haha. I dont know. There was nothing on SRS’s website either but that wasnt an indicator of anything. Just sayin maybe a phone conversation would be better.

For me the starter is no big deal because I looked into a tilt stand that allows to tilt the kart onto its tail while running in neutral. 1 man job up and down.

Maybe theyre too busy playing w karts to update their website? Haha. I dont know. There was nothing on SRS’s website either but that wasnt an indicator of anything. Just sayin maybe a phone conversation would be better.

For me the starter is no big deal because I looked into a tilt stand that allows to tilt the kart onto its tail while running in neutral. 1 man job up and down.

I’m sure you’re correct. I still don’t see it happening specifically where I am, though, where KZ125 seems to be the way to go up here.

As for the starter, it’s easy enough to start on the stand. My thing is the convenience out on the track, if/when needed. For me, the extra battery weight is a nonissue (I need it just to make weight, actually).

It’s curious because the IAME 175 SS - from which the SSE was derived - has a starter, but uses a float carb. I don’t know why SKUSA didnt just go with the SS out of the box. The reason(s) for the changes are riddling from my outside perspective. I’m not sure, but suspect the rebuild intervals are very close, if not identical, between them.

The dyno numbers ive seen on the SSE (44hp 19tq) are well short of the claimed power of the european 175 (49hp 27tq). Hopefully that means the engine is longer maintenance intervals than the european 175. Wouldnt make sense to detune it if it didnt give longer life…

are well short of the claimed power of the european 175 (49hp 27tq). Hopefully that means the engine is longer maintenance intervals than the european 175. Wouldnt make sense to detune it if it didnt give longer life…

I don’t think it’s detuned at all.

You can’t really compare the dyno runs from two different dynos without knowing the test standard they conform to (if any) as well as the differences in fuel, carb setup etc.

The MRC run gives a better idea as it compares different packages on the same dyno.
One thing you can conclude is that the 175 has about 15%+ power at the peak compared to the S1 supernats winning stock moto.

Compared to a KZ, it makes more peak power, but the KZ has a lot of area under the curve at the upper RPMs.

Squish is the same for the two, but the sse has a 22mm spacer on the exhaust that the euro one does not.

When you say area under the curve are you saying from 0 rpm to peak or only within the typical rev range? I thought the sse was more area when looking only at the usable range

Very exciting to see all the shifters coming out in the PNW in the last couple years. Certainly the SSE will have a place for those who want to race it.

@WheelSpin
From what I have read, Skusa has changed out the bottom end bearings, converted the barrel from a Nikosil lined one to a more standard iron liner and used a different ignition to the standard 175.
There may be other things but I cant remember what.

I’m sorry I cant provide the sources, some of them may have been in KP threads.

I am watching all this from out side, here in Australia the Super Shifter is still the standard offering with a slide Carb and Nikosil liner. Any engine raced here has to first go through homogenisation and the SSE variant has not. I am hopeful that after some time has passed in competition over there I may be able to lean on the distributor here to get this one homogenised as well, I would much rather own the SSE with its diaphragm carb than have to worry about emulsion tubes and jets.

Thx for the info. Hadn’t heard/read about the detail differences. Still would like to have a starter option. I’ll most likely stick with the TaG-KZ, but I’ll check into it some more. The SKUSA specific changes are interesting. How much maintenance does the diaphragm carb require?

4 posts were split to a new topic: Road Race Gearing for IAME 175SSE