Original article from The Colorado Karter.com.

Kayley Korn and the Korn family are a kart racing family from Colorado. For several years, Kayley has been by her husband Henry’s side as they have discovered the sport, first as racers and then as racing parents. I wanted to give her a chance to give candid insight into what it is like being a mother and wife in a family of racers. 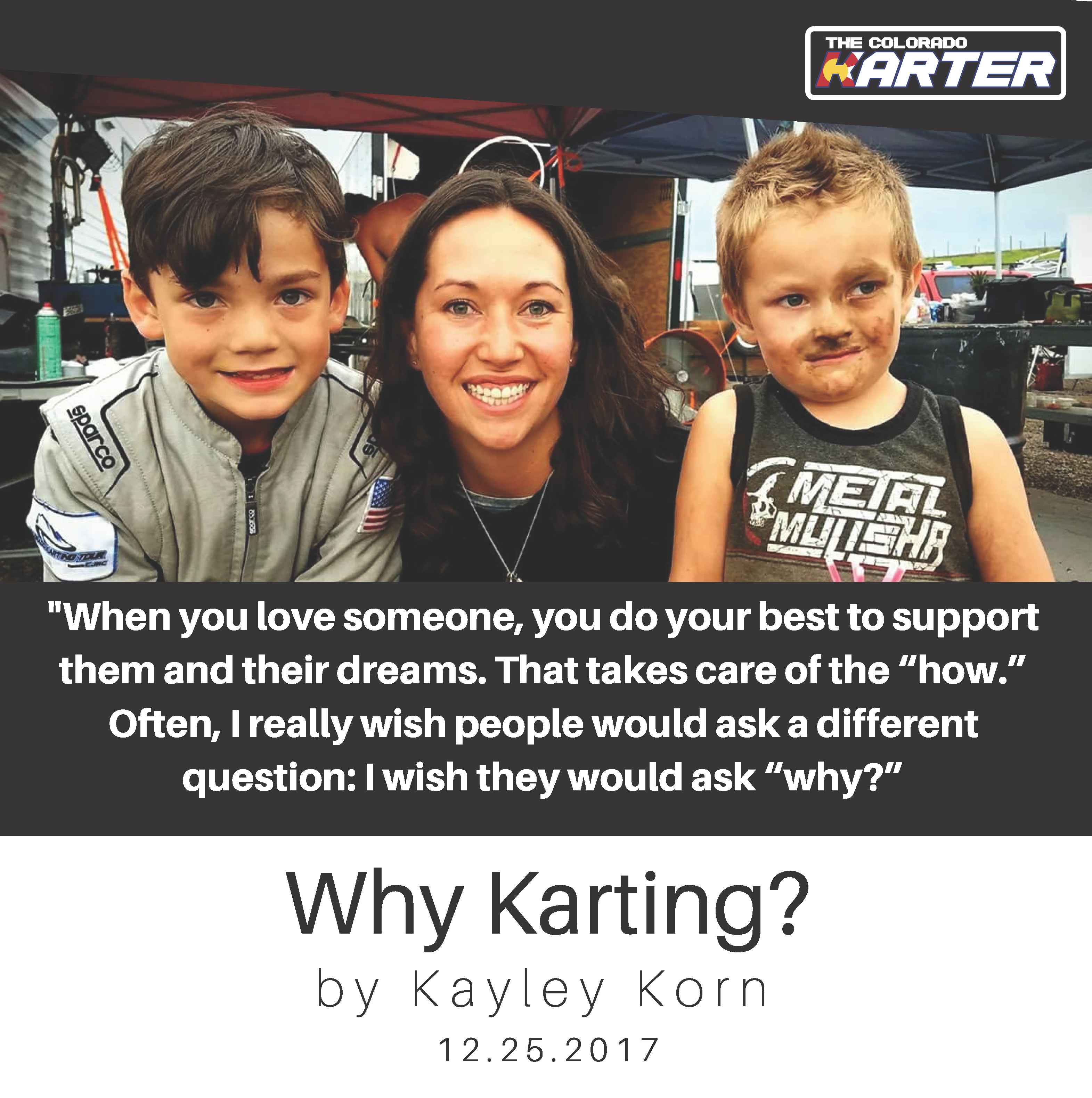 I’ve been asked countless times: “How do you do this?” Each time, I have to pause, and think: Do they mean to ask how I handle kart racing as a mother, or as a wife? With a husband competing in multiple racing classes, and our oldest son also racing in Kid Karts, the question of “how” I handle each race day is inevitable. As a mother, seeing your child competing on the racetrack is both stressful and exciting. The same goes for when I watch my husband Henry compete. When you love someone, you do your best to support them and their dreams. That takes care of the “how.” Often, I really wish people would ask a different question. I wish they would ask “why?”

My husband has always been into racing. Before karts, he raced import cars at the drag strip. After a few years of working on the car for months, only to compete for a few seconds at a time, he’d had enough. Henry had wanted a kart for some time, and found his first on Craigslist. With some guidance from his friend Al Coday, he built a shifter kart. After the first track day at IMI, he was hooked! His first race came shortly after that. Initially, kart racing was an exciting experience, but also a bit intimidating for us. Fortunately, we quickly found out that the karting community is welcoming. I was excited for him and this new adventure.

Our son Gage was just 2 years old when Henry began kart racing. Of course, he wanted to be just like his dad! He asked for a kart for Christmas when he was 3. Now at the age of 6, he also gets to compete. His passion for go karting was evident from the moment he first began driving up and down the street 4 years ago on Christmas day for hours. With Gage also beginning to race, I saw the opportunity for my son and our family to spend even more quality time together, and to be outside doing something they loved. 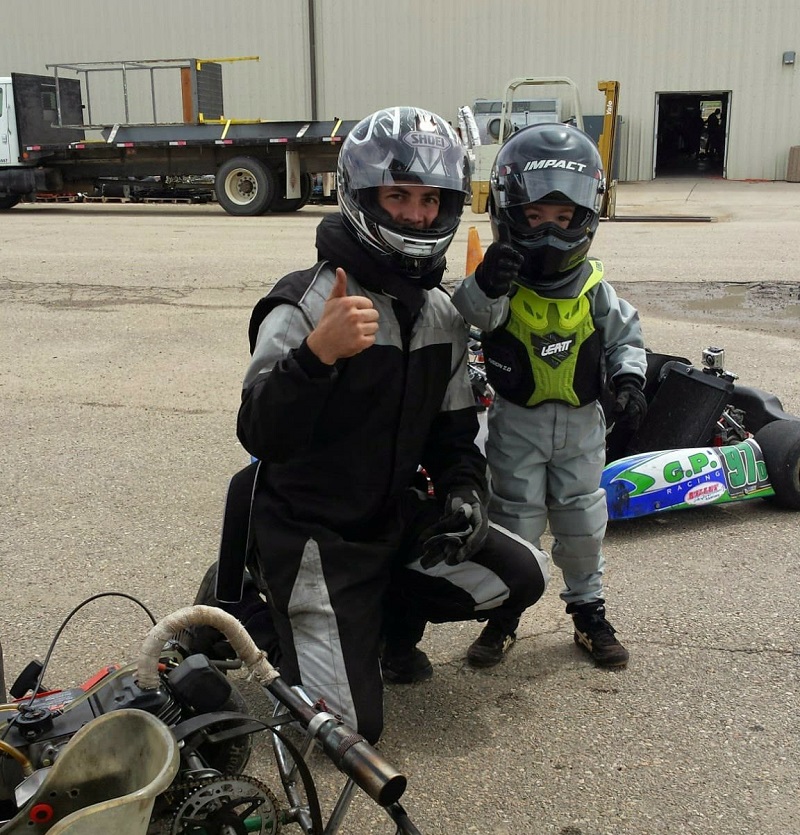 What began as a hobby for Henry has brought into our family something that isn’t just about him—it’s about all of us. When the weather turns fair in Colorado, it’s racing season for us. Once that starts, between the practice days and race weekends, there isn’t much time left in our weekly schedule for much else. Our weekends are often spent with our ‘race family’ at tracks across Colorado, and even in different states. We camp out. We share meals. We laugh together! When Henry and Gage are in the thick of the karting season, at times we see our racing family more than our closest true family members.

I’ve learned that karting is just as much a team sport as an individual competition. Driving a kart takes skill, and both spend hours practicing, perfecting. Every time we go to the track, Gage is learning the value of dedication. As I watch him grow as a driver and a son, I know that this time spent together will help him for the rest of his life, whether or not he continues to race.

On race day, our son gets to see his father at his best, and sometimes his worst. Each day at the track presents us with challenges, and together we are learning how to problem-solve quickly in some very difficult situations. Early on this season, Henry had a rough race at Action Karting. After investing in a brand new kart for the season, he was caught up in a wreck. While there wasn’t much damage, it caused him to earn essentially no points for the event. It was a huge blow to his championship hopes early in the season. After that, he was pretty disappointed. It would have been easy to give up on the season there and then. Still, he persisted throughout the rest of the year, and I am proud of him for that. Gage and I see how Henry goes all-in for something like kart racing. I admire him for it, and it’s a lesson I believe our family has taken from the track into other parts of our lives. Together, father and son are learning how to win, and how to lose.

Henry likes to joke that I absolutely hate kart racing. That couldn’t be further from the truth. It is true that when we have a bad week, I find it hard to want to go back right away. Henry, on the other hand, can’t wait! I love what the sport does for my son, and I love the relationships our family has made throughout Colorado, and beyond. So, we tough out the hardships at times, and load up the trailer again. We get back out to the track. I will support Henry and Gage in whatever they do, even if at times it seems a little crazy how dedicated they are. 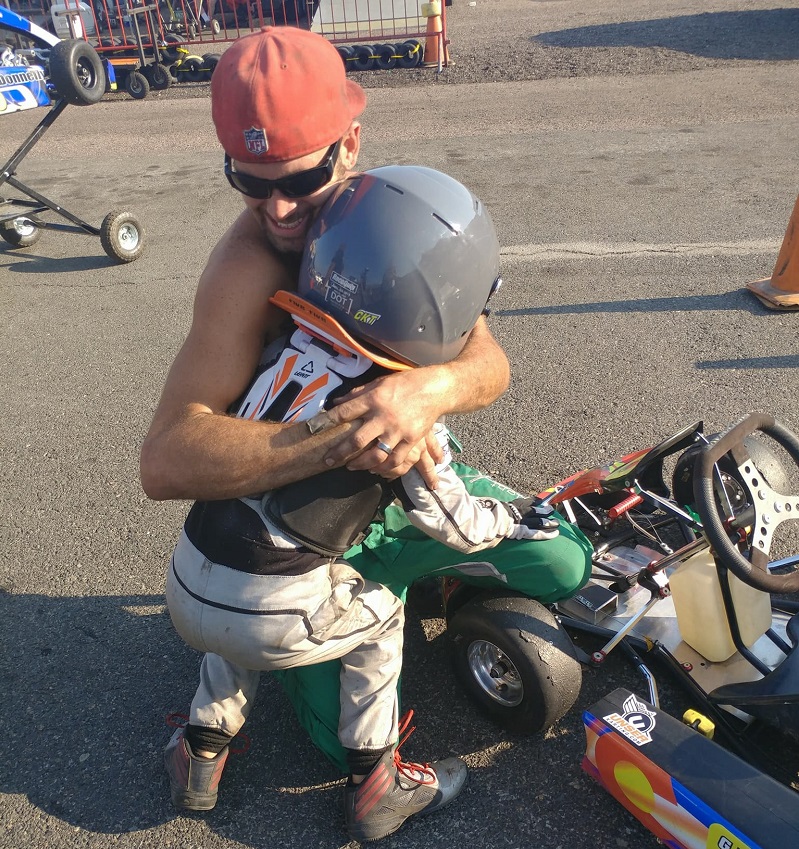 Our youngest son Mason doesn’t race. Even though he has had a kart for some time, he hasn’t shown significant interest in it. Still, that doesn’t mean he doesn’t want to go to the track! Sometimes, he wants to go more than the racers do. Mason has made great friends with other kids, and loves playing outside, in the dirt. He watches his brother race, and cheers for his dad too.

Some of the best moments that happen at the track occur between Henry and Gage, father and son. I watch as Henry coaches him, and as they work on the karts together. Gage won his first race earlier this year in his Kid Kart. Henry and I were so proud of him! I could tell that he was proud of himself too. Gage had practiced, and worked and worked until he achieved that win. Seeing him achieve that was such an accomplishment for him, and something I will always cherish.

Balancing Fear and Support for Gage

Don’t get me wrong—having a six-year-old racing karts can be emotionally draining. As a parent you want the best for your kid. You want to keep them safe and happy. When you can’t completely control those things, it can take a toll on you.

Despite this, I know Gage has the best safety equipment we can buy. We are always there, making sure he’s ready to race. On track, I’ve grown to trust his skills in the kart, and his developing ability. Crashes do happen, but I remind myself that something can happen to Gage anywhere in life.

The Korns have always been a racing family. We go as spectators to the Mile High Nationals, Monster Jam, and even World of Outlaws sprint car races. For us, kart racing allows us to combine our love for motorsports with our love for our family. At the track, the whole family is engaged, and together. It allows for a father and a son to compete, and learn together, at the same place. It also allows a son to cheer on his brother and father, and to spend time with his friends. And as a mother, it allows me to see my husband and son doing what they love, and always working to improve. While we have only been racing karts for 5 years, it has already become a major part of our daily lives. Our family is better because of it.

Interesting. My spouse is not involved at all with me and Nick’s karting. Part of that is that it’s great for her when we go because she gets the day to herself. I wonder wether it would be wise to ask her to come along one day to see her son in action. Part of me thinks it would be a good idea for her to see her boy doing something challenging, the other part of me worries that she will freak out when she sees him going sixty miles an hour.

Dom, that’s an interesting thing to ponder! It really isn’t my perspective to tell you how to parent or interact the son/mother relationship. I will say, though, that if your son continues to race, eventually the parents will have to come to terms with the risk he takes each time he straps on the helmet. Fortunately, assuming your son has all the best safety equipment, the sport of karting is overall quite safe (statistically) compared to other power sports such as motocross or even dirt oval racing. As a parent, I think most feel at least marginally better when they see how much thought and care most racing series put into having consistent medial aid on site, and a plan in place to handle incidents.

Part of that is that it’s great for her when we go because she gets the day to herself. I wonder wether it would be wise to ask her to come along one day to see her son in action

You could ask her to come drive too. I take Kart Dates with my wife when I can. Throw the idea out there and see where she takes it…

This is a few years ago, daughter and mom on the track into the sunset. 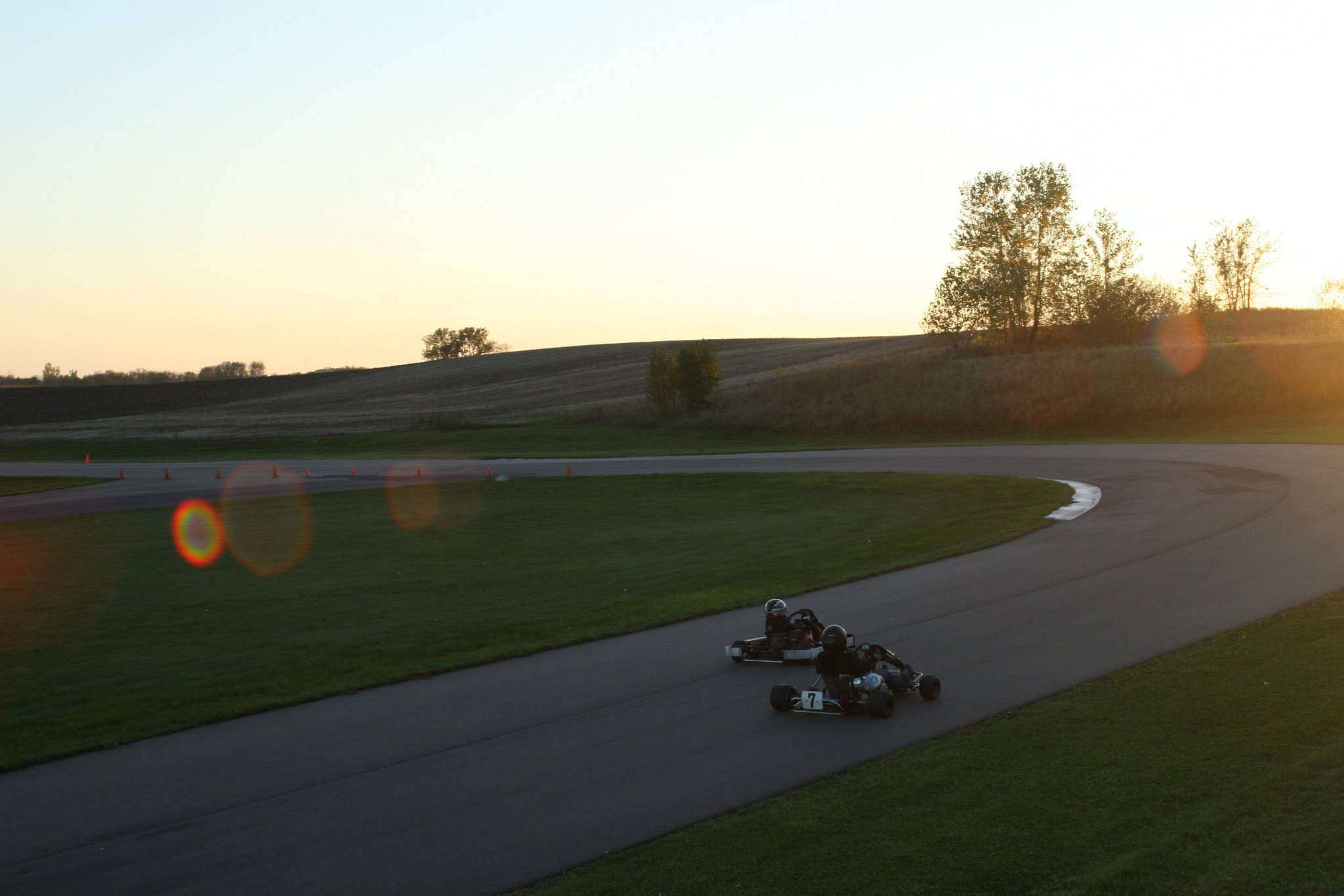