Originally posted at The Colorado Karter which is now managed by @Eric_Gunderson. Eric is working on building a great resource for karting in the Colorado area. Even if you are not around there, definitely check out the site.

I’ve been working with Eric on “The Karter” so you expect to see more cross-pollination of cool things like this between TCK and KartPulse. 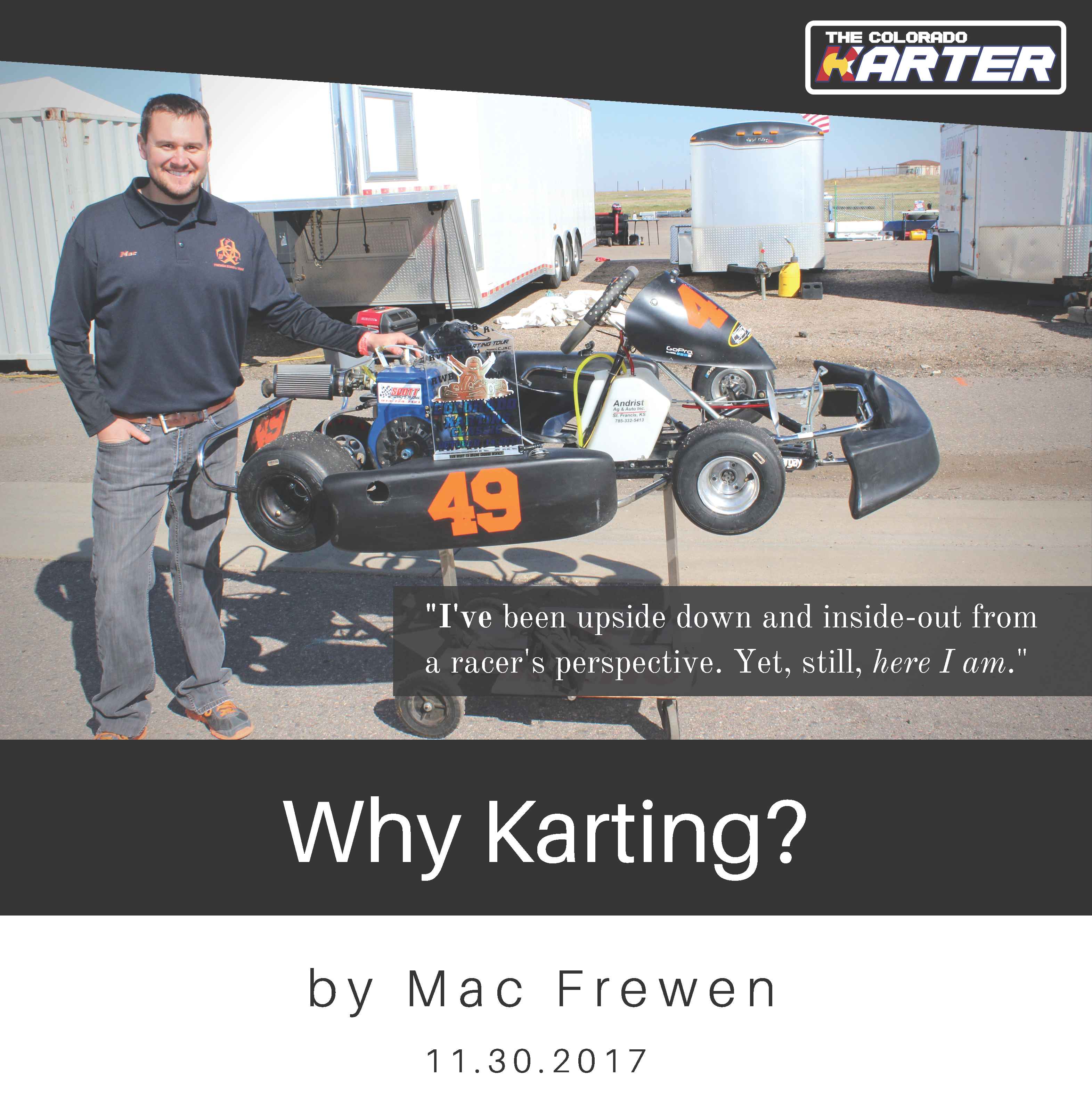 It’s 1994 in St. Francis, Kansas. I’m 6 years old, and about to attend my first Grand Prix Go Kart race in my hometown. My future brother-in-law Brian Siegfried pulled up to the starting grid with a brand new Margay, running a flathead on methanol. Mind you, I had absolutely no idea what a “Flathead” was, let alone had I ever heard one at the time. I noticed the chrome, polished wheels, and flashy new paint job. What I remember most, though, was the sound the motor made when it started. At the time, I had never felt so much adrenaline rush through my body. I watched and listened to the “thump” those tiny little engines produced. It was at that point, I knew, I wanted one of those little “toys.” I would do anything to get one.

8 years on, and the St. Francis Grand Prix was long gone, a crushing blow to my dream to race at the time. I remained optimistic, and at 14 I had saved up enough to buy a custom chassis from a local kart builder—he had kept a lot in storage since the last Grand Prix years before. The kart was cleaned up, set up to drive in a straight line, and given a “blueprinted” Flathead. All for an easy 600 bucks! There was not enough candy in the world that would’ve given me the same rush I got when I sat in that kart, running it up and down dirt roads for the very first time. Just two days later, my brother and I blew the motor up. I was devastated.

Despite this setback, I still had a chassis to terrorize the town with. All we needed was another engine. I mean c’mon, we didn’t know you couldn’t wrap these things up to 9k without blowing it up! So, the self-teaching began. I turned to online forums, to books, and magazines. I consumed anything that would teach me about go kart motors and the science behind them. I knew nothing about these karts when I started, and I didn’t want to learn anymore hard lessons. 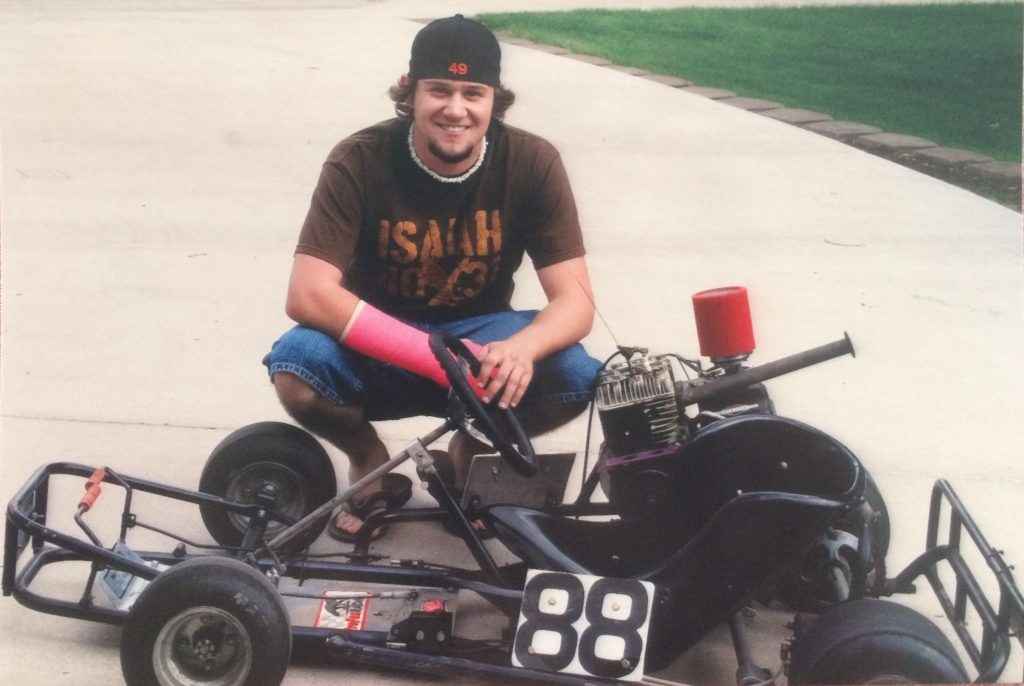 St. Francis, Kansas, with the Margay and Flathead

I made my racing debut a short while later in Oakley, Kansas, at the fairgrounds. It was an oval dirt track, and I showed up with a ‘straight’ chassis and a tiller motor that I “hopped up”. I literally stole one of dad’s 25 pound bench press weights, and bolted it to the floor pan so I could make weight! If I’m honest, that night was a TOTAL disaster. I came off the track after getting lapped multiple times, I’d never felt so broken. I felt like a failure. Looking back, I honestly don’t know quite why I didn’t quit right then and there. My history is small town America, where sports are the town’s #1 pride. As an athlete, you gave everything, every time. Having gone through that, I believe it’s just instinct to never give up, to never quit. A few weeks later I drove to Colby, Kansas. I hoped to learn as much as I could at their dirt oval track.

I showed up and instantly was recognized by a few of the previous racers from Oakley. Fortunately, they turned out to be friendly; A couple gentleman picked up that I was a very green racer, and came over to help in every way. How I felt after that night in Colby changed my mindset on the world of karting. I was offered a “legit” full blown setup to race that night instead of what I brought. I couldn’t believe the night and day difference. I ran laps and laps and laps at the rear of the pack while taking in every detail I could.

True Love of The Sport

I kept at it, racing on dirt tracks for years until I moved down to Birmingham for work. I sold everything just to get there in fact. I wanted to settle in before I took another glimpse at karting. I found a track close to where I lived, Talladega Raceway Park. I went out there, and started to ask questions. I watched for a couple weeks, and walked around the pits. I was introduced to my first southern “coach”, Ronny Magouirk of Bullet Motorsports. From my time in Kansas I thought I had an idea of how much people enjoyed racing. Nothing, however, prepared me for the true passion the south has for the sport. Their love for racing is their life, and everything else revolves around it. Nothing else mattered. It was “true” love of the sport. 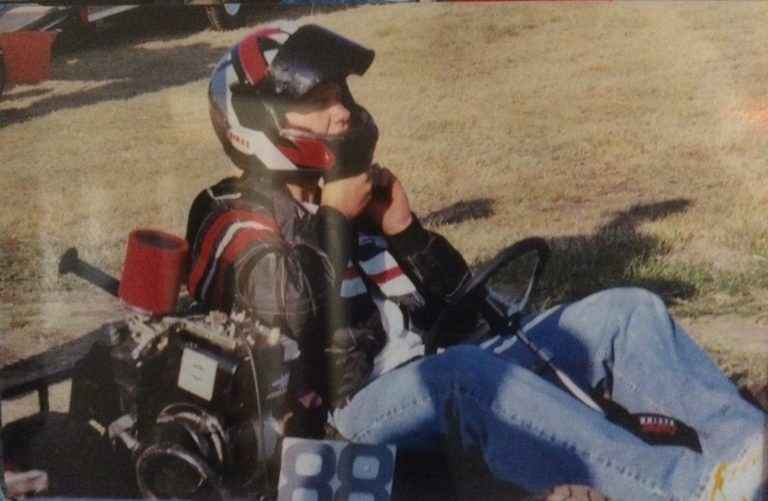 My experiences in Alabama took my knowledge of kart racing and engine building to a whole new level. Ronnie quickly took me under his wing, and set me up with a winning package. Every week I raced, and I paid attention to everything that man had to share. The amount of knowledge he had completely blew me away. He knew the track, the kart, and the driver. We used completely different chassis setups for the multiple races we ran throughout the night. Each performed perfectly every time. We raced multiple tracks each week, with solid fields every time and every little touch, throttle burp, and hundredth pound of air pressure in the tires was critiqued and adjusted to get that last little edge. I was taught a whole new way to go about racing. It opened up an arsenal of driving abilities I never knew I had.

So where does this bring me now that I’m in Colorado? I’m taking on a new style of racing here, as it is all sprint racing along the Front Range. It’s a whole new learning curve, but one I am very happy to learn, just as before. I figured that as long as I go to a track that predominately has more left hand turns than right, I’d already be off to a good start! So, when my coach told me that my left hand turns are my biggest weakness you can see where I was a little confused. Fortunately, I’ve been able to adapt in a short amount of time. I have even finished on the podium a handful of times.

Racing is an endearing sport, given time. It takes knowledge, skill, and some luck. After all these years building engines and driving, I will always come back to karting. I cannot begin to thank those that have helped me get to where I am today. Through all of this happiness I have shared, there have definitely been a fair share of scary and disheartening moments.

Why I keep Coming Back

I’ve been upside down and inside out from a racers perspective yet, still, here I am. A quote that has always stuck with me is: ‘If you fall, fall on your back, because if you can look up, you can get up’. That is so true. If you’re hurting due to a setback, then you’re passionate about what you want to do! You can turn that into a determination which will drive you above and beyond anyone’s doubts, especially your own.

Throughout my years in racing, I’ve met some very amazing people. To this day I will vouch that the racing community will forever be the biggest support group anyone could ever ask for. They’re my friends, competitors, and also my biggest supporters. They’re also close family! These families take the sport very seriously. If you ever go to watch a race, take note of what you see. Kids are playing with each other, rather than playing on their phones. Adults are going far out of their way to help complete strangers. Pets don’t have just one owner, they belong to everyone in the pits on race day. The human interaction in these racing events is by far the closest and most personal I’ve ever seen, which says a lot figuring there are more popular sports in the States.

If there is one thing I’d say to someone who’s curious to get into the sport of kart racing, it’s this: Do it, and don’t question your decision! You will meet some of the most inspirational people you could ever encounter. You may not win right out of the gate. It may take a while to get on the podium. But, at the end of the day, I can tell you first hand that means very little in the long run. It’s the rest of what karting represents that will forever keep you involved.

In Their Own Words | Shane Honkanen
Why Karting? | Kayley Korn