Let’s try to get something e-racing going in the off season for fun. See the poll below to vote for two of your favorite sims.

It can be either something you already have, or something you might consider buying. You can change your votes at a later stage if you’d like to. Also, we’re not necessarily doing a karting series… it depends on where the group takes it. For example, In 2017 we did Formula Mazda in Forza.

I am console bound as I have zero interest in setting up a gaming PC. That being said I was sub 6 (I think 5:20ish) at Nurburgring in formula -A in project cars. Given how insane it is to SIM that kind of speed, the recent Porsche record is unbelievable. Mr. Bernhardt’s 5:19 is just plain wow.

Basically just say Forza or Project cars or whatever. We can work out who has what later.

I think work it out now, that way people can look at the trend and decide if they want to purchase something. I don’t have many of these, but if there’s a consensus, I’ll buy one.

Iracing is really good for hopping in a race with real people anyday but I personally don’t like the physics as much. Also for the budget people cost will be higher having a subscription and buying the individual cars / tracks.

I just installed project cars 2 and the graphics are amazing I think that’s good for the immersion. I haven’t had time to race it yet but for others I hear the immersion is better but not as hard as iracing a little too much assist but that may keep people in. On the plus side cost of product is less and you get all the tracks and cars but it is very demanding on the cpu and gpu very demanding!

iRacing takes a pretty healthy commitment to be competitive.
Did you vote yet (you can update you vote before the poll closes)

So far looks like Project Cars 2 is the favored choice 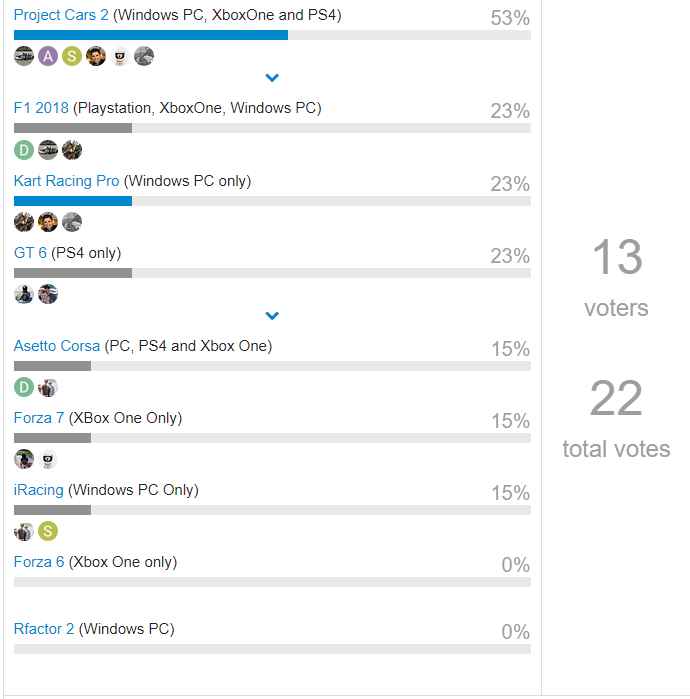 Dudes - you need to change your votes to rFactor. Do it now.

I am going to be interested if James is going to buy the game that people vote on to be moderator for these events.

Pcars runs great on Xbox one so I am guessing you don’t need the latest card to run it.

Actually scratch that. It says GTX260 as minimum. Must have been another sim I tried to fire up.