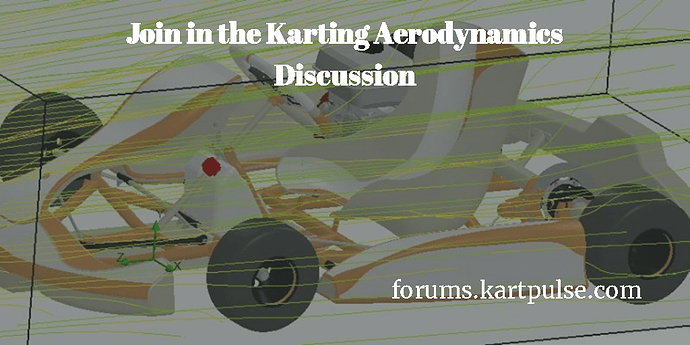 In the “206 Karters at NCMP” facebook group Matt Geist took the time to compare CIK vs Gold up type noses.
So, let’s talk aero for karts.

Have you experimented with different aero things? What did you discover?
Does it matter?
If so, how much?

Some reference materials:
Go-kart aerodynamic optimization by means of CFD and RBF Mesh Morphing-min.pdf (4.5 MB)
The evaluation of aerodynamic drag of go-karts by means of coast down test and CFD analysis (1).pdf (1.8 MB)

I have used both, but in road racing, not in sprints. I was road racing as the bodywork transitioned from what was common in the early 90s at the club level, to full fiberglass. That full bodywork is being mimicked by the Gold Cup as so far as the general shape of the nose. With the sprint plastic, terminal velocity and the speed at which it’s reached were both noticeably negatively effected. Sure, it won’t have AS strong an influence in shorter tracks with their smaller top speeds and taller gear ratios, but we all know that the effect of a draft starts even at slower speeds.
So what this means in the current debate is that, when the “full” plastic is pitted against CIK-type plastic, the full plastic will have a speed advantage. As 4 cycle racing continues to return in popularity in sprints, someone has to make the unpopular decision, and soon than later, because, regardless of the decision, a whole lot of racers will be upset. Waiting will only make the number of upset karters larger.

As 4 cycle racing continues to return in popularity in sprints, someone has to make the unpopular decision, and soon than later, because, regardless of the decision, a whole lot of racers will be upset. Waiting will only make the number of upset karters larger.

I agree with this statement. Although I do wonder how much of an issue this really is. Not the performance issue, but rather the (supposed) challenge of finding places to race due to bodywork restrictions. I’m not saying it doesn’t exist, but I wonder how widespread it really is.

Agreed. I feel a little silly even commenting on anything 4 cycle as I last raced a flat head 26 years ago

Aye but there’s not a huge difference between a built animal and a KT100 can. Did you look at documents I linked? Much nerdy stuff.

I merely skimmed the docs. I’m on a stretch right now, so it might be days before I can read for comprehension.
Yeah, I’ve seen the Animals at Dousman. They do go at a fair clip.

So fast forward 4 years after this thread started, who is making the best aero today? Didnt the gold cup nose get banned from CIK?